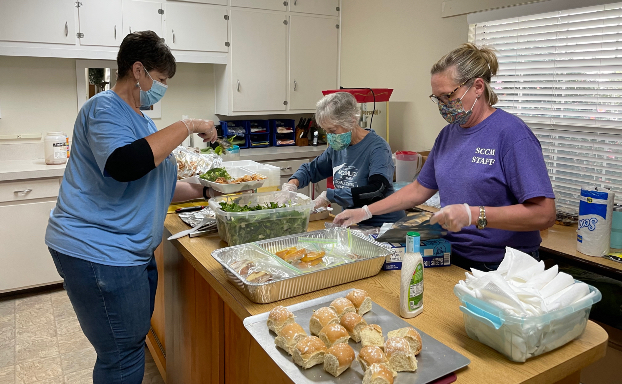 Despite all the challenges thrown its way due to the COVID-19 pandemic, Stanly Community Christian Ministry continues be a beacon of hope for so many people struggling with food insecurity and financial instability.

Between SCCM’s many programs, including its Clothing Closet, food pantries and Community Table locations, the organization provided more than $1.24 million in service value to the community last year. The total is on par with 2020, when SCCM provided about $1.27 million.

“2020 obviously was the most unique because we had to create all new systems. In 2021, we were able to focus on improving those systems to meet the client’s needs,” said Jenny Clore, development director with SCCM.

While the organization saw a dip in the number of people needing food assistance as a result of government programs going into effect, there was an uptick in people applying for financial assistance with many facing utility disconnection or eviction.

One of the highlights for the organization was opening another Community Table location at Mt. Zion Church in Richfield in October, to go along with the other two in Albemarle and Norwood. Though it’s only been open for a few months, the Richfield Community Table, which provides meals to individuals every Tuesday and Thursday from noon until 1 p.m., is already averaging around 90 people per meal.

“I think there’s a real need for people to not just have food but to also have community, to be able to see other people,” Clore said.

SCCM also purchased land behind its location at 506 S. First St., Albemarle, last summer to expand its facility and offer more programs. Clore said the expansion should hopefully be completed by January of next year.

The organization also began a partnership with the Senior Center in May to provide groceries to seniors and purchased a container for the Clothing Closet in June to accept after-hours donations.

Below is a breakdown of SCCM’s programs and how many people were served last year: