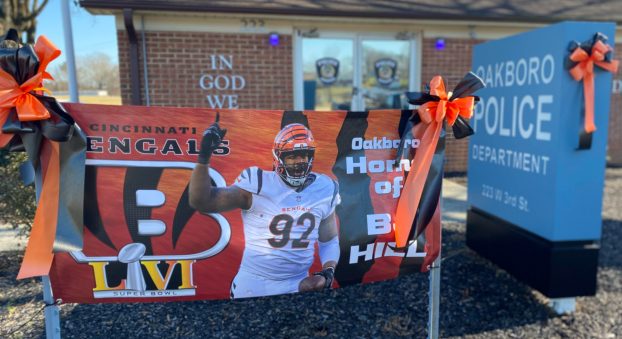 Decorations and a banner outside the Oakboro Police Department show the town's support for Oakboro native BJ Hill, who will play in Super Bowl LVI. (Contributed)

For many this Sunday, the kelly green color of West Stanly High School’s players and fans will be exchanged for orange and black.

As Super Bowl LVI approaches this weekend in Los Angeles, many supporters in the western end of Stanly and countywide are pulling for the Cincinnati Bengals because one Stanly native will be starting.

Former West Stanly running back and defensive lineman B. J. Hill will represent the Colts and the county when the Bengals take on the Los Angeles Rams in Sunday’s game.

It was Hill whose third quarter interception set up a touchdown as part of the Bengals’ rally from 18 points down to win 27-24 in overtime at Kansas City.

Charles Edwards, an assistant coach with West, coached Hill when he played for the Colts. In a recent interview, Edwards expressed what he told college recruiters then about Hill.

“I know he can play football, but he’s just a good guy. His character is top-notch (and he) was the hardest worker we’ve ever had in the weight room,” Edwards said.

Edwards, whose son Conner was a freshman when Hill was a senior at West, talked about the first thing that came to his mind after the Bengals rallied to beat the Kansas City Chiefs in the AFC title game.

“We’re going to have a West Stanly Colt in the Super Bowl!”

Edwards also said if Hill wanted something when he was at school, “he just worked at it. He went and learned how to do it and be the best at it.”

Brett Morton, the head coach at West, said “we are all Bengals fans,” adding it is “a testament as much to BJ and his interactions with the school and the community since he left.”

Morton’s first year with the team, in 2017, was Hill’s senior year at N.C. State. When he received draft evaluations in his mailbox from the NFL regarding Hill, the coach said he asked Edwards and West head basketball coach John Thompson, among many others, about him. Hill played four seasons for Thompson and is one of only six men’s basketball players in the school’s history with 1,000 or more career points.

“I’ve never heard anyone say anything bad about BJ,” Morton said. “Everyone has always given him a glowing recommendation about how good a student he was and how hard a worker he has been.”

Since the Bengals won the AFC Championship Game Jan. 30, Hill’s hometown has been replete with reminders of what Hill means to the team. Banners at local businesses celebrate Hill’s hometown, with signs from the Oakboro Town Hall to Oakboro Choice STEM School showing their support for him.

Mark Rowles, a recently retired teacher West Stanly, talked about Hill as a student. Rowles said Hill was the same guy off the field as on it, adding he was “down to earth. He knew what he was there for. He had a job to do, and that was it.”

Rowles said Hill was the big athlete in school, “but it never went to his head.” He said he was businesslike and “the model student.”

Hill’s mother, Myra, still works at West as the school’s custodian. Rowles said he saw B.J. every day of the week “and his mom was in (my classroom) three days a week checking on him.”

Annabell McCormick Smith, Hill’s aunt, was part of a fundraiser selling T-shirts with proceeds going to the school’s athletic programs.

Smith said her sister, BJ’s mom, expected around 100 orders for shirts. As of Wednesday, the order total for the $10 shirts was approximately 2,500, with orders coming from as far west as California and as far north as Connecticut.

“For Stanly County, this has been a great thing,” she said, referring to Hill reaching the Super Bowl.

Smith said Hill’s parents and three sisters will be at the Super Bowl cheering him on wearing the custom-made shirts.

“It’s still not real even though it is real,” Smith said about her nephew playing in the Super Bowl. “It’s like you’re dreaming, but it’s really happening.”

Smith’s son, Ryan McCormick, was a teammate of Hill’s at West Stanly. Both he and teammate Trey Barbee, along with friends and former teammates at West, were in the second deck of Arrowhead Stadium watching the Bengals win the AFC title.

“We didn’t sit down the whole time,” Barbee said. “All the Chiefs fans were really nice to us because I guess they didn’t expect to lose at home.”

Barbee said when sports has so many guys who are not humble about their accomplishments, Hill is different.

He said it was great to see success for “a guy from way back in middle school, how he’s worked hard and kept his nose clean and had his priorities straight.”

Barbee, who works in Locust at Barbee Insurance, said the past two weeks in western Stanly have been crazy.

“He’s always had support from his hometown…it’s cool to see a guy with a first things first mentality. He’s set up his family. He’s been responsible with his money. He’s strived to be a good dad, trying to do everything in the correct way,” Barbee said.

The Super Bowl will kick off at approximately 6:40 p.m. Sunday.

More coverage on B.J. Hill can be found at these links.