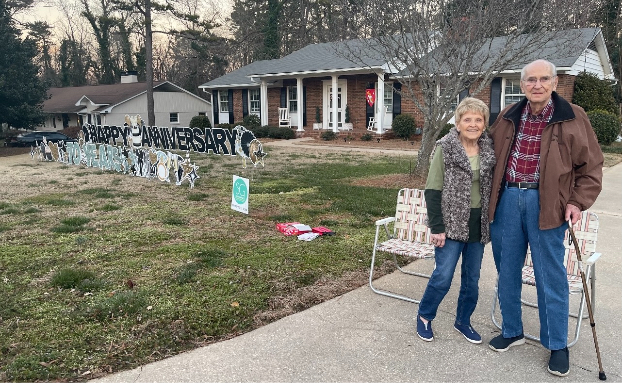 Frank Hopkins went outside to get the paper on Feb. 1, a ritual he does each week, when he noticed something very odd.

There was an accumulation of some white substance in his front yard, which he thought might be snow, even though the forecast had not called for any type of wintry weather.

Half-asleep, his wife Nelle thought the same thing: “Who piled snow in the yard?”

It turns out what they were looking at was the backside of a greeting sign covering the length of their yard that was erected in celebration of a pretty important milestone. Their youngest son Scott had secretly hired the yard greeting company Sign Gypsies to arrange the pieces. It read “Happy Anniversary” in the background, with “70 Years!” in the front. 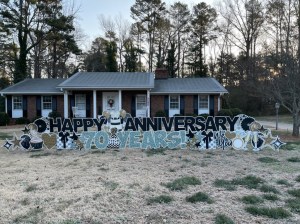 Nelle and Frank Hopkins received quite the reception the morning of Feb. 1, when they discovered a greeting sign commemorating their 70th anniversary. Photo courtesy of Scott Hopkins.

Later in the afternoon, as family members were taking pictures outside, Frank, 91, and Nelle, 89, were encouraged to take a seat in their driveway. “I thought, what is going on here,” Frank said.

The couple was soon treated to yet another surprise: an array of cars passed by the house, with horns blaring as friends and family members eagerly waved to the couple.

“It was great to see that many friends we have,” Frank said.

Scott arranged the festivities as a token of gratitude for everything his parents have done for him, his brothers and the rest of the family.

“To be together for 50 years is like ‘wow,’ but to now be 70 years and for them to have grandchildren and great-grandchildren, we are very blessed,” Scott said. 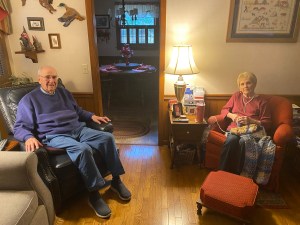 Frank and Nelle Hopkins at their home in Albemarle.

Getting to know each mother

Growing up in Albemarle, Frank and Nelle first got to know each other in the 1940s when he worked at Quality Grocery on Montgomery Avenue while she worked in her mother’s beauty shop, which was next door. Their friendship really began to develop once Frank began driving her home from school.

Though he had a crush on her, Frank thought she liked his brother Larry, who was her age, as they enjoyed driving around together. It wasn’t until July 2, 1949, when Frank formally asked Nelle to “be his girl.”

She turned out to be the first and last girl he would ever date.

“I thought she’s the one so why look for another one,” Frank said about his courtship with Nelle.

They dated for about three years before marrying on Feb. 1, 1952. During their time together, they’ve had three sons — Scott, Todd and Kevin — along with six grandchildren and four great-grandchildren.

Nelle operated a daycare in her basement called Hopkin’s Nursery for about 27 years while Frank, who spent two years in Germany with the U.S. Army, worked at Watkin’s Music Company for about 40 years.

Like other couples that have been together a long time, there is no secret for sustaining a relationship, other than loving each other through the ups and downs. The Hopkins have learned to enjoy the ride and not take everything so seriously.

Frank, who’s a frequent jokester, has a unique take on why they have stayed together for so many years: “I think the reason I’ve got along with her so well is I’ve disagreed with everything she’s said,” he said.

As a child of divorced parents, it was always important for Nelle to find someone with whom she could forge a lasting relationship with that would survive the tough times.

“I asked God that I would have a good and long marriage,” she said.

One value they live by and have imparted upon their sons is that despite the struggles that might go on, they never go to bed angry.

Longtime members of Central United Methodist Church in Albemarle, faith has been a key part of their lives. As a member of the church’s prayer shawl ministry, Nelle estimates she’s knitted about 800 shawls, which go to people in need of comfort and solace.

Their relationship has served as a source of great inspiration for the rest of the family.

“It’s just been amazing watching them together,” said Scott’s daughter Lauryn. “I hope to find love like that one day.”

During the interview with the couple, one idea kept coming up in conversation.

“It was really impressive,” Nelle said about the anniversary, “because it made me think how blessed we are.”