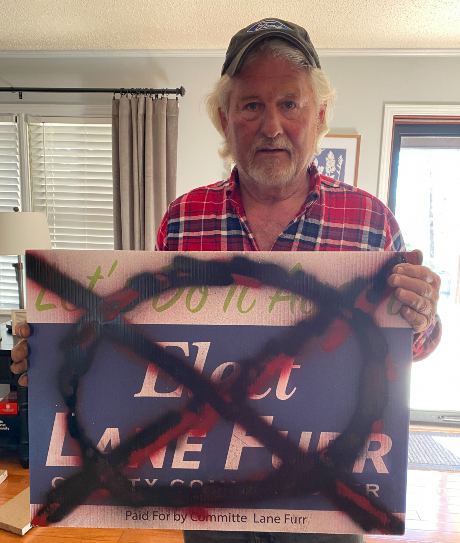 Lane Furr holds up one of his defaced campaign signs. Photo courtesy of Lane Furr.

Commissioner Lane Furr, who is running for re-election this year, reached out to Sheriff Jeff Crisco over the weekend after he says several of his campaign signs were vandalized and stolen over the past few weeks.

Under North Carolina law, it’s a class 3 misdemeanor “for a person to steal, deface, vandalize or unlawfully remove a political sign that is lawfully placed…”

Furr, a Republican, has already purchased 150 campaign signs each costing $11, of which all but about 30 have been posted on the property of individuals or businesses who requested them. He said he’s struggling to put up new signs because all of his energy has been focused on replacing the ones that have been stolen.

He is not aware of any other political candidates in the county who have had their signs stolen or vandalized. Kimberly Blackwelder, director of elections for the county, said she had not been aware of Furr’s signs being messed with and had not heard of any other candidate who have had similar problems.

“I’m mad, I’m fed up, I’m tired of being kicked in the teeth,” he said. “I’ve tried to run a clean campaign…and then I’m getting shot at as far as tearing my stuff down.”

He compares his signs getting vandalized to someone scratching his car.

Furr is offering a $1,500 reward for information regarding those responsible, adding that he wants them to be prosecuted. If anyone has any information, they are encouraged to contact the Sheriff’s Office or call Furr at 704-622-3423.

Furr, who was sworn in at the end of 2018, has already filed to run for the at-large seat in November. Former school board member Patty Crump has also filed for the position.

The filing period began Dec. 6 but was suspended by the North Carolina Supreme Court two days later as the N.C. Court of Appeals weighed a lawsuit filed by the North Carolina League of Conservation Voters arguing that the state’s new political boundaries were unconstitutional. The state Supreme Court ruled earlier this month that the new Republican political maps violated the state constitution.

Municipal filing for partisan offices will be resume at 8 a.m. Feb. 24 and run through noon March 4.