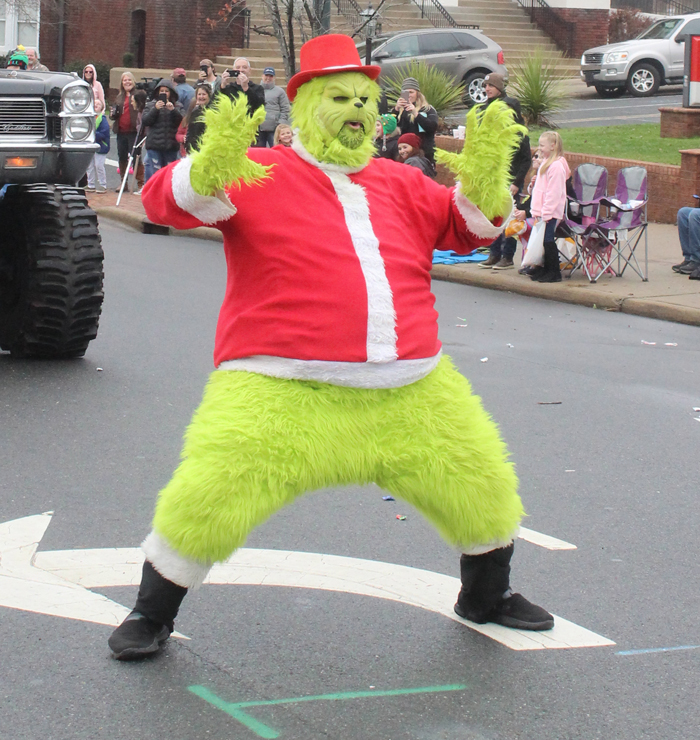 The Grinch breaks it down while "Turn Down for What?" plays as part of the Albemarle Downtown Christmas Parade. (Photo by Charles Curcio)

There was an issue with holding the events on Nov. 27, which was Small Business Saturday and only two days after Thanksgiving. Some businesses, Almond said, stayed closed during that time in order to be with family. Almond also mentioned that attendance was lower for parade participants and city staff compared with previous years as several who typically volunteer were out of town.

They found that while business was strong immediately following the parade, it dropped off shortly after. One retailer said even with more people in the area, there was very little difference compared to past years, when Small Business Saturday was its own standalone event.

Once the parade ended, there seemed to be less of an interest in traditionally popular attractions such as the ice sculpture artist and Santa Claus.

Mayor Pro Tem Martha Sue Hall, who is also a member of the special events committee, said she felt “sorry” for the ice sculptor because there was “nobody up there” as compared to previous years.

“It seems like the sentiment is we’re putting all our eggs in one basket by hosting one big event,” she told council.

The council approved both of her recommendations.