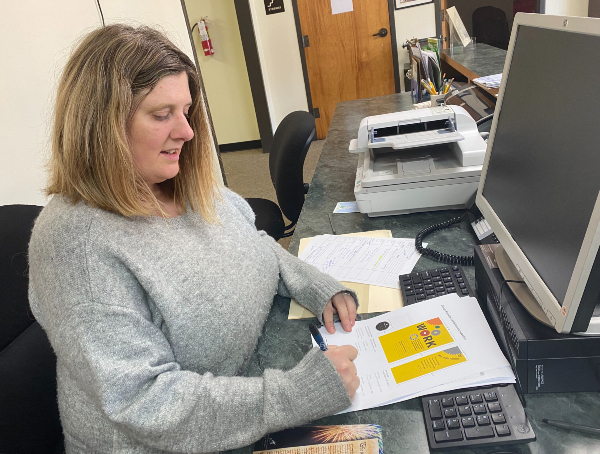 Megan Sullivan edits her script for the Stanly County Museum's upcoming exhibit about the evolution of work. The museum is partnering with the Smithsonian Institution as part of its Museum on Main Street program.

The Stanly County Museum is developing a new exhibit set to open this summer centered around the evolution of work in Stanly over the past 150 years.

While the museum typically creates several exhibits each year, this one will be quite different. That’s because the organization will be partnering with the Smithsonian Institution, the world’s largest museum, as part of its Museum on Main Street or MoMs, an outreach program that engages small town audiences by “bringing traveling exhibitions, educational resources and programming to small towns across America through their own local museums, historical societies and other cultural venues,” according to its website.

Museum director Megan Sullivan, who applied specifically for MoM’s starter kit program last year, said the museum was one of five across the country that was accepted into the program and the only one in the state.

“They recognized the fact that a lot of people that live in rural areas don’t get to travel to Washington, D.C., and get to see Smithsonian-caliber exhibits,” she said.

As someone who grew up enjoying the Smithsonian museums, finding out she would be getting to work in collaboration with the organization “was very humbling and exciting,” Sullivan said.

She will work with Selwyn Ramp, MoM’s assistant project director, who will serve as her liaison on the project. Sullivan also received a $16,500 grant from North Carolina Humanities to help finance the collaborative exhibit.

“We’re able to spend a lot more money on this exhibit than we normally can,” she said, noting there will be interactive kiosks and hopefully a virtual tour of downtown Albemarle. In her five years as director, this is by far her biggest undertaking, but she’s excited about the opportunity.

Although the museum will be utilizing a detailed Smithsonian-created outline for developing the exhibit, which includes graphic-designed exhibit panels and a selection of optional images and quotes, the bulk of the content will be localized.

The exhibit, which will date back to the county’s formation in the 1840s, will be organized around four key themes: Where we work, how we work, who works and why we work.

“We get to use all of their resources and experience to create an exhibit about Stanly County, about our local history,” Sullivan said. “It’s a really great and amazing experience for us to have.”

An exhibit development committee has been formed along with an events committee, comprised of people throughout the county. At least 30 people, including volunteers with the Badin, Locust and Oakboro museums and Dr. Amy Blake-Lewis, SCS assistant superintendent for curriculum and instruction, are helping Sullivan with the exhibit. Students from Pfeiffer University’s art department and Stanly Community College’s graphic department will also volunteer their time.

By making this such a diverse, collaborative effort, Sullivan is wanting to utilize relevant resources from the other museums to include in the exhibit

“Everybody’s been very open to sharing what they have at their other locations,” she said.

Each of the volunteer museums and the school system will feature smaller exhibits to serve as a continuation of the main one at the Stanly County Museum.

Though Sullivan and the development committee are still working on incorporating local content into the script, people can expect to find artifacts and images associated with mill life, working in the mines and how slavery and segregation impacted the county. There will also be a spotlight on certain businesses and individuals that have made an impact. Sullivan estimates the exhibit will be about 70 percent Stanly-specific with the other 30 percent from a national perspective.

Once the exhibit is finished, Sullivan hopes the community can feel a sense of pride about its rich history.

Sullivan expects the exhibit to be completed and open to the public this summer. It should be around for at least a year.