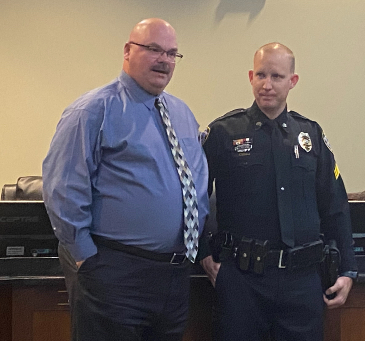 With a capacity crowd inside the Joel Honeycutt Community Room, including the bulk of the police force, Chief Jeff Shew handed out the 2021 Chief Steven “Smitty” Smith Officer of the Year award Feb. 10.

The award, which was named after the beloved former police chief who died two years ago, was based on a combination of factors including officers’ statistics (arrests, incidence clearance rate, etc.), how many times they were named officer of the month and their impact on the general community.

Shew presented the award to Sgt. Brandon Stancil, who has been with the department since 2007 and was nominated for the award by five of his peers. Aside from being named officer of the month, he ranked second overall for incidence clearance last year with a rate of 98 percent, made 23 arrests and received five documented citizen commendations for his service to the community.

“In his nearly 15 years of service to Locust, he has developed into a department leader, a mentor to younger officers and an invaluable member of the Locust Police Department patrol division,” Shew said.

Shew also emphasized that even though Stancil is one of the most helpful and compassionate officers he’s been around, “when he has to turn it on, he will turn it on like that and just take care of business.” 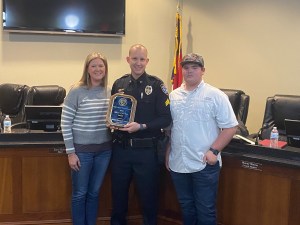 Brandon Stancil with his officer of the year award alongside Steven Smith’s widow Melissa and son Hunter.

Mayor Steve Huber, a retired police lieutenant with Charlotte-Mecklenburg Police who’s been in law enforcement for more than 30 years, had high praise for Stancil, calling him one of the top five officers he’s been around.

“This man is one of the finest men that I have ever met,” Huber said. “He loves his family and he takes care of Locust like it’s his family.”

Huber also mentioned Stancil’s ability to shift from being one of the nicest officers to someone criminals do not want to come into contact with.

“If you come to Locust with the intent to do something wrong or do something stupid, he’s the last person that you want to see get out of that car,” Huber said.

Last year was a tough year for LPD, Shew said, as several officers contracted Covid and some experienced isolated instances of anti-law enforcement sentiment. But in the midst of such challenges, he was proud his officers continued to rise to the occasion to protect the citizens of the town.

“I could not be more proud of the Locust Police Department,” he said.