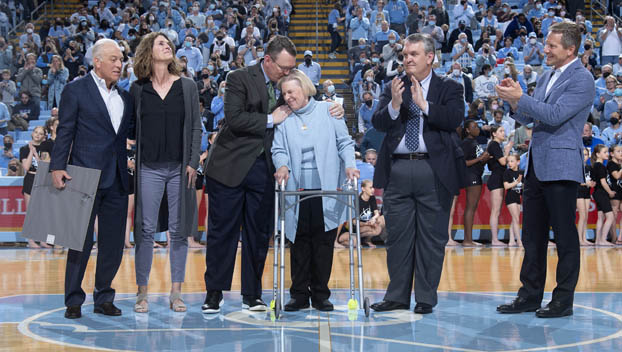 For 40 years, Woody Durham was the authoritative voice on the University of North Carolina Tar Heels. When you heard that familiar booming voice — whether over the radio, on a head coach’s television show, or at a local Rams Club chapter meeting — you knew immediately that you had a direct line to Chapel Hill, courtesy of the long-time play-by-play man who made a career of telling Carolina fans to “go where you go and do what you do.”

So it’s entirely appropriate that this week the athletic department’s Media and Communications Center — a central hub that beams the latest Tar Heel content to hundreds of thousands of Carolina fans on a daily basis across a variety of platforms — has been named in Durham’s honor.

An anonymous Rams Club donor made a substantial donation to name the building, which opened three years ago. The letters went up on the outside of the MCC this week, following approval from the UNC Board of Trustees and many fans received their first look at them Wednesday when Carolina hosted Pittsburgh.

On the call for that game on the ACC Network: Wes Durham, Woody’s eldest son.

“My dad was the Voice of the Tar Heels in an era when you didn’t have digital platforms or the written word online,” Wes says. “It was what you picked up in your driveway in the newspaper, what you saw at 6 and 11 on the news, and my dad. He was that connection for so many Tar Heel fans, and I was blown away when they told us what was happening.”

Carolina honored the entire Durham family Wednesday at the game, as Wes’s brother Taylor was also in attendance, along with Jean Durham, the very proud mother of Wes and Taylor and Woody’s wife of nearly 55 years, and Wes’s wife, Vicki.

It was Jean who told Woody she was looking forward to seeing the leaves change colors in the Northeast when Woody retired from play-by-play before the 2011-12 school year. The couple had arranged their lives around the rhythm of a college sports season for virtually their entire lives.

But it is also Jean who frequently glows the most when Woody’s legacy is celebrated.

“We are incredibly humbled,” says Taylor Durham. “We’re humbled by the gratitude of the University of North Carolina and the athletic department, but also by the fans. For the last decade, the fans have always kept our father at the top of their mind. That has meant the world to Wes and myself, but also to our mom.”

The donor who made the gift wanted to celebrate Woody’s incredible play-by-play legacy, of course. His signature calls are the soundtrack for multiple championships and game-winners. But if he was just the radio voice of the Tar Heels, it’s unlikely the donation would have happened.

In addition to reminding Carolina fans of Durham’s incredible impact on all of our fan experiences with his trademark voice, the gift is also intended to honor the personal relationships he established with so many Tar Heel fans across the state and beyond. When the Carolina basketball season ended, Woody’s season was just beginning — he still had dozens of Rams Club chapter meetings to host and radio affiliates to visit.

It didn’t matter which Carolina head coaches came with him on those trips. As long as Durham was there, Tar Heel fans from Murphy to Manteo felt that their favorite team was right there in their town, no matter how small or big. He never left a Rams Club meeting without signing every autograph and posing for every picture, and that led to numerous close relationships that went beyond simply calling the game on the radio.

That was an important responsibility for Woody, who knew what it meant to love the Tar Heels from afar. He’d grown up as a Carolina fan admiring the iconic Charlie “Choo Choo” Justice.

As a kid, he helped stock the Kenan Stadium concession stands with his family, which also earned him access to watch the game.

“He valued that connection to the fans so much,” Wes says. “He always talked about how if you signed up to be the radio play by play voice, you’re essentially signing up to be the front facing representative of that institution. It meant even more to him because he went to school at Carolina. He cherished those visits, and those relationships with Tar Heel supporters were very important to him.”

As someone who was an ACC basketball broadcaster and local sportscaster before he took the Carolina job — yes, Woody Durham left a job covering the ACC as a whole to focus solely on the Tar Heels — Durham would have a tremendous appreciation for the dozens of aspiring media members who have gotten their start in the MCC over the last three years.

Seemingly every year he was Carolina’s play-by-play voice. If someone in high school or college wanted to write a paper on Woody Durham or interview him for a project, he met with every single one of them, always mindful that part of his job was to help the next generation get started.

“My dad always impressed upon Wes and myself the responsibility we had to pay this thing forward,” says Taylor. “He thought he had the responsibility to offer insight or advice, and the opportunity might come on the air, or it might come in spending 30 minutes with somebody off the air. He always told us that when we had the chance to speak to a student who had an interest in doing this job, we should always do that. I think he’d find it really special that his name is on a building that allows students to have an opportunity to get started in this business.”

There are precious few buildings on the Carolina campus named for individuals; there are even fewer named for individuals who made all their contributions in the 20th and 21st centuries. Somehow, it seems fitting that thanks to the generosity of one of the thousands of Carolina fans touched by Woody Durham, Roy Williams Court and the Dean Smith Center now stand next to the Woody Durham Media and Communications Center.

After all, Woody was the connection for a generation of Carolina fans to their favorite Tar Heel sports icons.

“It’s very appropriate,” Wes says. “And it highlights his legacy with the University of North Carolina, which was a relationship that meant the world to my dad. He wouldn’t love that we’re making a big fuss over him. But he’d be incredibly proud that so many fans value the way he connected them to the Tar Heels.”