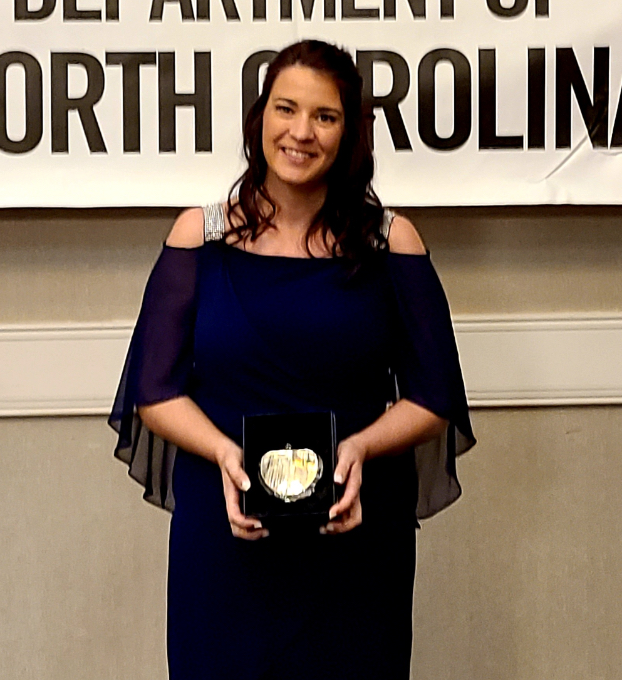 Keely Towne was recognized in Greensboro earlier this month as K-5 State VFW Teacher of the Year. Photo courtesy of Keely Towne.

Badin Elementary kindergarten teacher Keely Towne has always had a passion and love for military personnel and their families.

Having come from a military family herself, as her father was in the Navy for more than 30 years and she has many uncles and cousins who have served, she understands the importance of honoring those who risk their life to ensure the freedoms so many Americans cherish.

Towne had dedicated more than 1,000 hours working with Valor & Honor Outdoors, a nonprofit that provides outdoor experiences to active-duty military, veterans and their families.

“Being a volunteer with them has really expanded what I’m able to do in terms of reaching out to servicemen,” she said.

As an educator, Towne created a Veterans Day program at the school where she invites members of the 82nd Airborne and 145th Airlift Wing, she began a mentoring program between the school and the Air National Guard and she regularly takes her students on field trips to the 235th Air Traffic Control Squadron. Her students have also mailed more than 700 cards to veterans across the world.

Her good works have not been lost on the central office staff at the school.

“Ms. Towne strives for her students to grow both academically and socially,” said principal Damon Rhodes. “She does a great job of incorporating good citizenship in the classroom — patriotism and what it means to be a proud American. She maintains a positive relationship with members of the military and has invited them into her classroom in the past. Her students are always engaged with the service personnel and enjoy the opportunity to interact with them.” 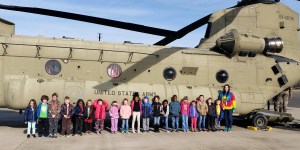 Keely Towne stands with her Badin Elementary students in front of a military helicopter at the Stanly County Airport. Photo courtesy of Keely Towne.

For all the work she’s done in helping veterans, it was not too surprising then when the school’s guidance counselor nominated Towne for the VFW K-5 teacher of the year for Stanly County last fall. The honor is part of VFW’s National Citizenship Education Teacher program. Once she found out, Towne had to submit several pieces of documentation, including her resume and a letter of nomination.

Master Sgt. Jacqueline Plumley, chief air traffic controller at the Stanly County Airport, who had a son in Towne’s class and also helped arrange for Air National Guard members to volunteer as mentors at Badin, wrote the letter on Towne’s behalf.

“If you have the pleasure of knowing Mrs. Keely Towne you are well aware that she has three passions in her life — those being her family, her school family and her military family,” Plumley wrote, adding that in the classroom, “she joins her three passions together like a comfortable family quilt.”

“Keely is certainly planting the seeds of patriotism that will drive the desire for her students to become our country’s future military leaders and civil servants within our community,” Plumley concluded.

Towne was notified in December that she was the local chapter winner for K-5 Teacher of the Year.

“It was definitely an honor to be recognized,” she said. “There’s so many teachers that do amazing things and it’s very nice to hear the positivity that’s going on.

“I’m just glad that I have a school that’s supportive and lets me bring in both of my loves and passions and be able to teach the importance of the military to my students,” she added.

But the good news kept on coming. She later learned she was the K-5 winner at the regional level and eventually found out she won at the state level. She was recognized at the VFW state convention in Greensboro earlier this month and received a check, a crystal apple with her name engraved and a military coin.

Humbled by all the attention she has received, Towne said she’s grateful to continue shining the spotlight on veterans and their families.

Towne, who has taught kindergarten at Badin since 2005, said what she loves most as a teacher is watching her students grow and develop.

What matters to her most, she said, is “just seeing the growth and excitement and getting kids to have a love for learning.”