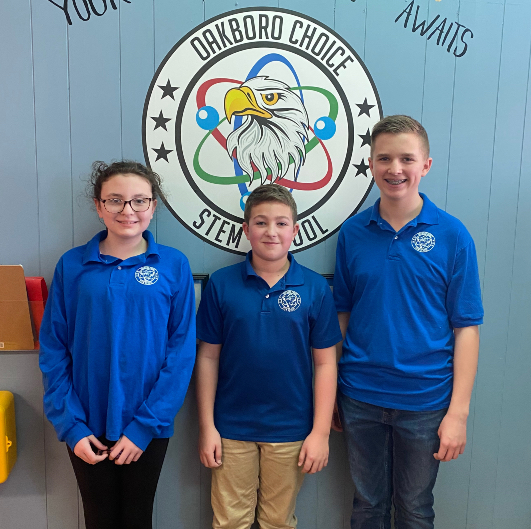 For the second consecutive year, Stanly County Schools has several Regional Science Fair winners who will go on to compete in the State Science Fair next month.

Oakboro Choice STEM School seventh graders Noah Waits, Lucas Mullis and Mary Crawford, each 13, took first place at the junior level for engineering at the UNC Charlotte NC Science & Engineering Fair, which was held virtually a few weeks ago. They will now compete in the junior division of the State Science Fair.

The three students were also nominated for the Broadcom MASTERS, a highly competitive science and engineering competition for middle school students.

The students’ project, a HOverBoard Powered Cart, was a continuation of the same project Waits and Mullis worked on last year, when they also made it to the state finals, but with a slight twist: The original design was inspired by wanting to help cafeteria workers but this year’s redesign was inspired by the school’s custodians.

“We are exceptionally proud of the perseverance of this team,” said Jennifer Crawford, Oakboro’s STEM coach. “They have been with us since we opened in 2017 and are true examples and extensions of the leadership and real world problem-solving skills that are taught here at Oakboro STEM.”

The Stanly News & Press caught up with the three Oakboro students to learn more about their project and what they enjoy most about science.

1. What was your specific project/what were you testing?

For our science project, we were trying to make it easier for the custodians to carry their tools around the school. We built a HOverBoard Powered Cart (HOBPC 2.0) to assist them in carrying tools.

2. How did you come up with the idea for the experiment?

What gave us the inspiration for this project was we saw the custodians carrying their tools. We figured that it must be tiring so we thought of some ways to make it easier for them and we came to the conclusion that we should build what we call the HOBPC 2.0. (HOBPC but better)

3. Did anything surprise you when you actually performed the experiment?

The HOBPC 2.0 surprised us when we saw how well it worked. The HOBPC 2.0 went much faster than we expected it to go this time but did not carry as much weight.

4. What’s your favorite part about science?

Our favorite part about science is the engineering concept because you get to build things and learn the different concepts of the tools you are using.