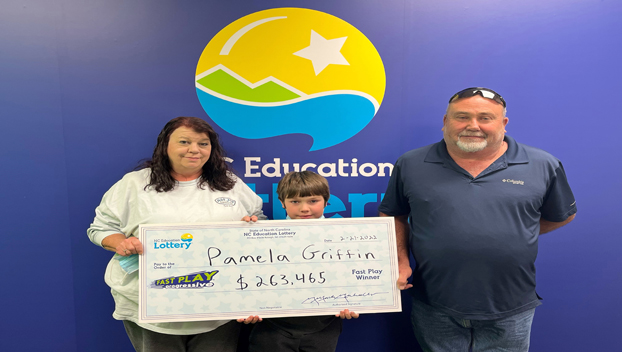 Pamela Griffin of Marshville said she saw how high the Fast Play jackpot was so she took a chance on a $10 ticket and was stunned when she hit the $263,465 jackpot.

“I was just in utter shock,” Griffin said. “Completely dumbfounded.”

Griffin said she thought she won $20 at first and then maybe $200 but the amount kept getting bigger and bigger. She said her husband was cooking breakfast for their kids when she showed it to him.

“He didn’t believe me,” Griffin said. “He thought I was crazy or something.”

Griffin, 55, bought her Big Bucks Bingo ticket from the Food Lion on Marshville Boulevard in Marshville. She claimed her prize Monday at lottery headquarters in Raleigh and, after required state and federal tax withholdings, took home $187,089.

Griffin said she has a daughter who is about to start college and she wants to use some of her winnings to help pay for her schooling.

Fast Play’s rolling, progressive jackpot increases with every ticket sold until it is won. A $10 ticket, like Big Bucks Bingo, receives 100 percent of the jackpot amount. The odds of winning a Fast Play jackpot are 1 in 240,000.

Ticket sales from draw games like Fast Play make it possible for the lottery to raise more than $900 million per year for education. For details on how $16.4 million raised by the lottery made a difference in Union County in 2021, visit www.nclottery.com and click on the “Impact” section.

Portion of Kingsley Drive in Albemarle will be closed