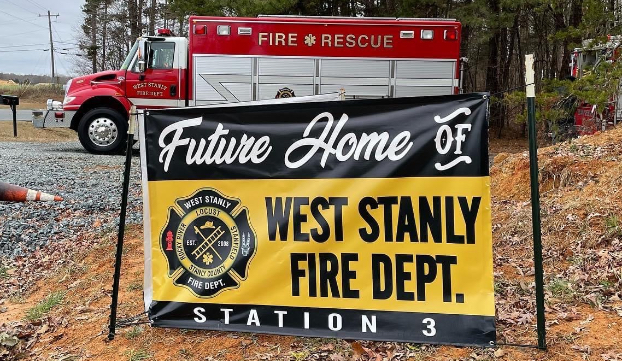 Signs have recently been placed on the property where a new West Stanly fire station will hopefully be built. Photo courtesy of Dakota Raborn.

As the western portion of Stanly County has grown over the years, so have the calls the West Stanly Fire Department has responded to.

The department responded to a record-breaking 1,104 calls in 2021, a 30 percent increase from 2020, according to its Facebook page. And with more people moving into the area, the department expects the numbers to continue to rise in the years to come.

To help properly provide for the influx of new residents, the department has taken steps to increase its presence within the community.

About three years ago, the department received two large donations enabling it to purchase about 2.1 acres of land at the intersection of Renee Ford Road and River Road to build a third fire station to go along with its two others — Station 1 at South Central Avenue in Locust and Station 2 at Love Mill Road in Stanfield. “Future Home of West Stanly Fire Dept. Station 3” signs were recently placed on the property.

“This plan has been in line for probably the better part of a decade because we were able to forecast the growth that was going to take place out there in Stanfield and the surrounding areas,” Fire Chief Dakota Raborn said.

Once built, the third station, which would primarily serve the southwest portion of the district, would be be staffed 24/7 with at least four firefighters, Raborn said.

The department last year reduced its fire ISO rating, which indicates how well-protected a community is by the fire department, from a Class 5 to a Class 3 designation, saving residents in the district about $1.2 million in homeowners’ insurance premiums, Raborn said, though the new rating only applies to residents that live within a 6-mile radius of one of the two stations. The addition of a third station would allow all other residents to be included under the Class 3 rating.

In order to get the proper funding to build the station, the department needs assistance from the Stanly County Board of Commissioners. Over the past two years, Raborn has requested a 2.5 cent tax increase (raising the fire tax from .10 cent to .125 cent per $100 valuation) to pay for the station. It also needs to remodel Station 1 and replace a rescue vehicle, but the commissioners have denied the request each time.

In a presentation to the commissioners last summer, WSFD compared itself to Albemarle’s fire department as both have fire ISO ratings of 3, according to a SNAP article, though AFD covers a larger population and has more staff. AFD also had a FY 2021-2022 budget of almost $5.1 million while WFD’s budget was $1.1 million.

While a new station is important to the department, it’s even more critical to the citizens, Raborn said. A new facility would allow the department to expand its operational capability, initiate quicker response times (it takes fire personnel up to 12 minutes to respond to certain areas) and help lower certain residents’ homeowner premiums by roughly $500 a year.

Raborn said he’s recently reached out to several commissioners, including chairman Tommy Jordan, about re-engaging in talks regarding a possible tax increase as part of the upcoming fiscal year budget.

Jordan said after conferring with several of his fellow commissioners, he talked with Raborn Wednesday morning about the commissioners coming to visit one of the stations to learn more about the fire department and what its needs are.

“It won’t be the last meeting, but we’re going to sit down and talk with him,” Jordan said.