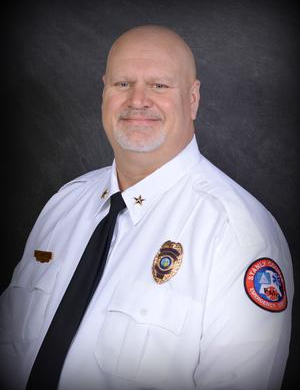 Brian Simpson is retiring from director of Stanly County Emergency Services at the end of the month. Photo courtesy of Brian Simpson.

After a lengthy career in public service, including the past 15 years as director of the Stanly County Emergency Services, Brian Simpson is set to retire at the end of the month.

“My entire career has been a pure blessing and one that has shaped my entire outlook on life,” he said. “A career in Emergency Services is a lifestyle and the dedication needed to survive in this profession can certainly be exhausting, but the reward is worth every minute.”

He’s worked with many other organizations during times of crisis during his tenure.

“Emergency management is very much a team sport, and one of Brian’s biggest attributes was his ability to recognize the importance of others on his team or outside the organization in helping make sure things got done,” said County Manager Andy Lucas, adding that Simpson’s “positive spirit, commitment to his job and loyalty will definitely be missed.”
The recruitment process for Simpson’s successor “is well underway,” Lucas said, noting he is optimistic the position will be filled in the near future. Until then, instead of appointing an interim director, emergency services staff will fill in the gaps until the new director is hired.

Simpson began his career as a volunteer firefighter in the late 1980s and joined the Stanly County Emergency Services in 1993. After gradually climbing the ranks, Simpson, 48, was eventually promoted to director in 2007.

In responding to people in need, whether due to a natural disaster like flooding, a health crisis like Covid or the opioid epidemic or some other event, “you gain a great respect for the resiliency of others,” Simpson said. These encounters he’s had with citizens during his tenure “have forever impacted my life more than they will ever know,” he added.

He’s grateful for the many people he’s worked with and the lessons he’s learned over the years but decided he’d come to a point in his life where “it was time to pass the torch and close this chapter.”

The daily rigors of a stressful job that can involve dealing with major injuries and loss of life also played a factor in Simpson deciding to step down.

“This profession, although very rewarding, can certainly take its toll and if it wasn’t for my family, I could never have survived,” he said. “My wife and two daughters have stuck by my side, supported and encouraged and basically waited on me throughout my career and now it’s time to return the favor.”

Simpson plans to enjoy a short sabbatical before continuing to work, though he did not provide any details except that it will be in the private sector.

The Emergency Services staff will have a retirement reception for him from 2-4 p.m. Friday in the Gene McIntyre Room at the Stanly County Commons.