In August 1965, a year after the passage of the landmark Civil Rights Act, 11 black students embarked from Kingville School to Albemarle High School, marking the beginning of integration within Stanly County.

“We had some nerves because we just did not know what to expect,” said Brenda Stanback, who was one of the students. The situation was not easy, as none of the Black students had classes or even lunch together. 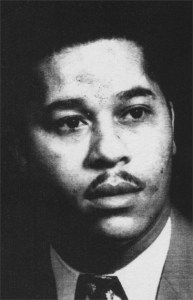 But whenever times got tough, Stanback remembered the comforting words of former Kingville principal Elbert Edwin “E.E.” Waddell, who had been an advocate for integration of the schools and who she met with before applying to Albemarle.

Waddell, who was principal for 20 years, would always tell his students that an education was priceless and no one could ever take it away from them.

During Stanback’s year at Albemarle, Waddell, who at the time was principal in Charlotte, would often call to check in on her and offer words of support.

Even though she went back to Kingville her senior year, Waddell had instilled in her the confidence that she could go to school and learn alongside her white peers.

“We were always taught that we were just as intelligent as anybody else and you don’t let anybody tell you that you can’t do this or you can’t do that,” Stanback said.

It was this kind of loving support that Waddell fostered within the South Albemarle community during his 20 years as principal at Kingville School that continues to make him such a beloved and iconic figure within the county. Even young children today have heard of the name and know about his legacy, Stanback said.

In recognition of his efforts, a dedication ceremony was held Feb. 16, 1986 during which the original Kingville campus, which closed in 1969, became the E.E. Waddell Community Center. To mark the occasion, the Black national anthem “Lift Every Voice and Sing” was proudly sung.

Stanback had known Waddell from a very early age, as they attended the same church, Union Chapel AME Zion Church. Her first memory of him as an educator occurred when she was in the first grade in 1956. She was one of the students selected to carry messages back and forth between teachers at her school and to Waddell, who was at the new Kingville high school, which was built the year before.

As a small 6-year-old, she recalls Waddell had the stature of a giant but once she got to know him, “he was like a teddy bear. He was really warm and really kind.”

When Waddell first took over as principal in 1943, Kingville was limited in terms of both its faculty, there were only nine teachers, and its student enrichment programs — but that soon changed. During his tenure, he created sports teams, including a football team, the Kingville Panthers, a band and choral group and recruited several qualified teachers, many of whom had master’s degrees. He also expanded opportunities offered at the school, including creating a popular brick-laying program, allowing students to enter the workforce with a set of skills upon graduation.

Even though he was a larger than life figure for many students, they still respected him and did not want to do anything to disappoint him, as he could be a strict disciplinarian.

Whenever students acted up, all the teachers had to do was convey the threat that they would be sent to Waddell’s office and “nine times out of 10, they would straighten up,” Stanback said.

Waddell worked to ensure his students not only received a proper education, but were cared for in other key areas. He made contact with a local Black dentist and doctor, who would regularly provide medical checkups for students who might otherwise not have the financial means to receive such care.

“That’s where a lot of the kids got medical care,” Stanback said, including herself.

Stanback remembers Waddell also opened a dairy bar along Waddell Drive, for people to come together and socialize.

“He saw a need and he put that dairy bar where we could go and have our own place,” she said.

Waddell’s kindness extended far beyond just his students. Stanback said he had a mission in the community “to do things to help others.” During his two decades as principal, Waddell worked to help transform the South Albemarle area. He was responsible for helping many residents become first-time homeowners and bought land behind the schools, divided it into lots and helped people secure loans to build homes. He also founded a textile plant called Stanly County Enterprises Incorporated in the early 1960s to help with unemployment of Black residents.

“Not only was he the principal of the school, but he was actually the Black leader of this community,” Stanback said.

As the Kingville Alumni Association president, a position she still holds, Stanback continued to maintain a relationship with Waddell over the years up until his death in 1988. She said he was always available whenever she needed him and would always pick up the phone when she called.

When talking about his legacy and what he meant to the residents of South Albemarle, Stanback emphasized his love for people and wanting to help as many residents as he could.