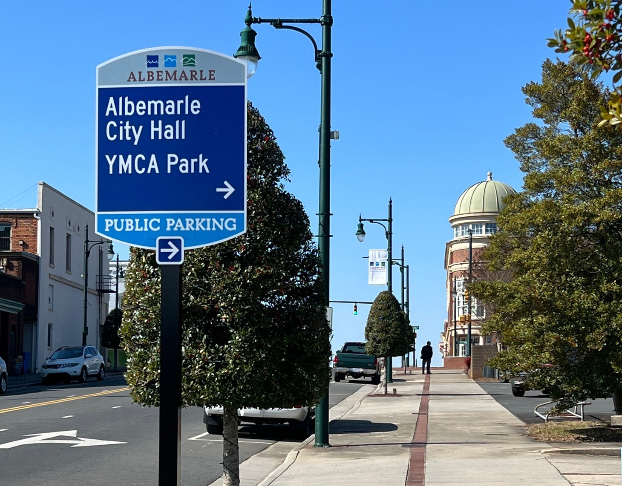 One of Albemarle's new signs directing people to points of interests such as City Hall and YMCA Park. Photo courtesy of David Fath.

The signs are part of Albemarle’s wayfinding program, which was approved by council last year. Thirty-five new signs are being installed during the first phase of the project, primarily across the downtown business district, according to public works director Ross Holshouser.

The program, which will take several years to complete, will include roughly 66 directional signs overall, providing directions to key landmarks such as City Hall, YMCA Park and the Albemarle Neighborhood Theatre. A green-colored sign was recently erected at Rock Creek Park and several other park locations will receive new signs. 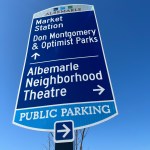 A close-up of one of the new signs recently installed. Photo courtesy of David Fath. 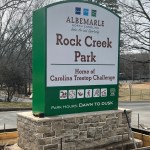 The city has subcontracted with the Charlotte-based company Signs Etc., which has been fabricating and installing each of the new signs, Holshouser said.

Funding for the first phase, which cost about $167,000, was included in the current fiscal year budget. The remaining phases will be appropriated in future budgets. Allocations from city funds, including enterprise, water and sewer and electrical, helped pay for the signage, along with new downtown banners, for the first phase.

“I’m thinking that we’re probably looking at three to five phases because once we complete the wayfinding directional signs, then we’re going to get into the gateway signs,” erected along entrances into the city, Holshouser said.

Wayfinding refers to information systems — like city signs — that guide people through a physical environment and enhance their understanding of the space. The wayfinding system is part of a streetscape master plan that the council adopted in 2016.

The goal of the program is to help make the city more accessible, especially to newcomers.

“I am thrilled to see some signage up that can help our visitors get around,” said Joy Almond, Albemarle Downtown Development Corporation director. ADDC helped provide funding for the first phase.

The city worked with Greenville, South Carolina-based Arnett Muldrow & Associates, a creative planning firm, for the past two years to develop plans for new signage around the city. The city has a history with the company as it helped design Albemarle’s downtown plan in 2001.