A man is in custody after a three-hour standoff with police Thursday which involved the death of a pet and the suspect threatening to kill a woman. 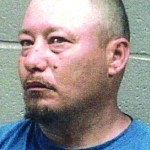 Albemarle Police Department successfully de-escalated a situation involving a subject armed with a firearm. Around 9:30 a.m. officers responded to a report of a domestic disturbance at a residence on Walnut Street. Officers learned that during the course of a domestic dispute a man fired a gun, killing a pet, and then threatened to kill a woman who was present.

The Albemarle Special Response team was called in as well as the North Carolina State Bureau of Investigation. Negotiators with the Albemarle Police and SBI began communication with the suspect.

Around 12:30 p.m. the Albemarle Police Special Response team observed the suspect entering a pick-up truck. Officers moved in on the vehicle and took the suspect into custody. No officers fired their weapons. No one was injured.

Albemarle Police were assisted by the Stanly Country Sheriff’s Office and the North Carolina State Bureau of Investigation.

Roger Lee Jernigan Jr. has been charged with two counts of communicating threats, one count of possession of a firearm by a felon, felony cruelty to animals and discharging a firearm within city limits.