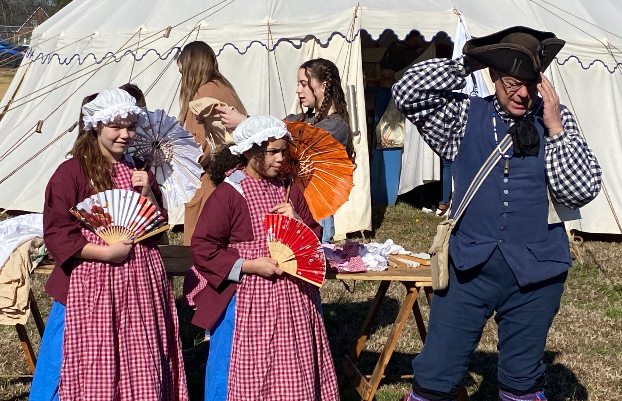 Autumn Williams and Bristyol Lilly get dressed in colonial garments as Tim Langdon talks to the students. (Photos by CHRIS MILLER/staff)

Did you know that the youngest documented drummer boy in the Revolutionary War was 7-year-old Nathan Futrell from North Carolina? Or that the Declaration of Independence was actually written in iron gall ink? How about that “Yankee Doodle” was written around 1755 by a British Army surgeon?

These were just some of the many facts fifth grade students at Richfield Elementary discovered Wednesday as they took part in an interactive, blast-from-the-past field trip hosted by Camp Flintlock, a North Carolina-based organization of historical re-enactors who teach students about life during colonial America, specifically from around 1750 through the War of 1812.

Fifth grade teachers Lauren Cody and Ginger Burris wanted Camp Flintlock to come to the school “because it allows our students to ‘live out’ the actual history of colonial times, which is a part of our social studies curriculum in fifth grade.”

Richfield already had established a connection with the colonial organization, as Camp Flintlock had previously hosted field trips at the school before the COVID-19 pandemic.

“The teachers still talk about having had them here before,” principal Stephanie Odum said.

Camp Flintlock got to the school on Tuesday, setting up their colonial tents on the baseball field before spending the night. Students arrived the next morning to the sounds of fife and drum music being played as they entered the building. 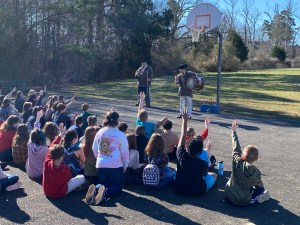 The idea behind Camp Flintlock is to teach students about life in the American colonies through a series of engaging and hands-on activities. Students in Burris’ and Cody’s classes spent more than half the day outside dressing up in colonial garbs, playing a variety of old fashioned games, making candles out of beeswax, learning to write with a quill and ink and making necklaces.

At each station, re-enactors would provide historical context behind each of the activities. As they dressed up in various garments, for example, students learned that colonial women utilized parasol fans such as part of an intricate courtship ritual. As they wrote the letters of the alphabet using a quill they learned about India and iron gall ink. They also learned the two-person game of graces, where one player takes a wooden hoop and, pulling apart the two rods, sends the hoop into the air for the other player to try to catch. 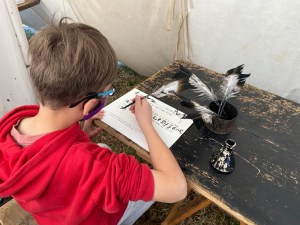 Dov Haviv writes the letters of the alphabet using a quill.

Another fun moment occurred after the classes learned about the parts of a flintlock musket (lock, stock and barrel). A volunteer was needed to shoot the weapon and the kids convinced Cody to come up and pull the trigger.

“I hope that they can take away a better understanding and appreciation of history,” said George Langdon, one of the re-enactors who taught students how to make necklaces. “Not just names and dates because that’s not really what we teach. We really teach the culture and lifestyle that people had to live back then.” 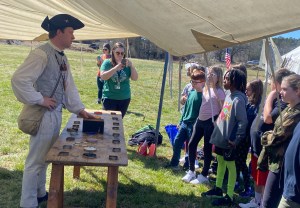 Tim and Renee Langdon founded the organization in 1999 with the idea that “people — particularly children — should have the opportunity to learn about history by living it,” according to its website.

Camp Flintlock typically hosts about 150 field trips at East Coast schools each year, Langdon said, though it lost about 95 percent of business as a result of the pandemic. The group has been getting busier of late as Covid cases have declined across the state.

It seemed like everyone — from the students and teachers to the parents and volunteers from Pfeiffer University — enjoyed being outside and learning about colonial American life. Many students even purchased items like animal tails and bamboo flutes at the shop in the Sutler’s Tent.

“I’ve had so many children tell me some of the most encouraging things,” Langdon said. “They’re always saying this is the best day of the school year or this is the best field trip I’ve ever been on.”

The students at Richfield certainly enjoyed getting out of the classroom and engaging with history in such a unique way.

“It was really fun and it was very authentic,” said Olivia Speights. “It made me feel like I was in colonial times because everything just felt so real. It didn’t feel made up. I felt really in it…It’s hard to explain — like I was actually a colonist.”