Bobby Lutz has two daughters. But if he had a son, he says he’d name him Tony in honor of 1992 graduate Antonio Demetrice “Tony” Smith, whom Lutz coached when Smith starred as a point guard for the men’s basketball teams at Pfeiffer College.

Lutz called Smith “the best player I ever coached at any level” and “a leader who made everyone better.”

“Tony was at his best when his best was needed,” Lutz added. “He played with an unbelievable passion for the game and was fun to watch.”

Smith still speakswith an unbelievable passion about his playing days at Pfeiffer, where he also earned a bachelor’s degree in sociology. 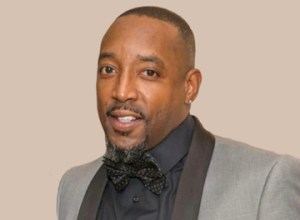 “We had some great times on the basketball court,” he said. “We jump-started the program. We put fans back in the stands. The only thing that I regret about my four years of playing basketball at Pfeiffer is that we didn’t win the NAIA championship because the fans deserved it.”

The Falcons came close to securing the NAIA crown during Smith’s college career. They made the Elite Eight his sophomore year and the Final Four during his junior and senior years. Smith’s numbers were a major reason for this success: He led the nation in scoring his senior year, averaging 30.2 points per game, and an average 10 assists per game.

He scored 3,350 career points at Pfeiffer, becoming the all-time leading scorer at the college and in the history of North Carolina collegiate basketball. He was a major reason for Lutz’s success as Pfeiffer’s head basketball coach. Between 1986 to 1995, Lutz compiled a 153-42 record that would help make him a member of its Sports Hall of Fame.

Smith, also a member of Pfeiffer’s Sports Hall of Fame, grew up in Suffolk, Virginia. He called Lutz, who’s now an associate athletic director at the University of Mississippi, “the best coach I ever played for.”

“Bobby wasn’t just our coach at Pfeiffer,” Smith said. “He was our friend. He motivated us, both on and off the court. If you weren’t getting it done in the classroom, he’d keep encouraging you until you did.”

After graduating Pfeiffer, Smith played professionally for 12 seasons overseas, mainly in Spain. He put in four seasons on Ford Burgos (2003-2007) of the Spanish Basketball League Gold, the league’s second level of competition.

Smith said he enjoyed his experiences abroad, which ranged from learning a bit of Spanish to getting to see much of Spain. He described an atmosphere that reminded him a bit of college: His team played about 30 games a season, not including playoffs. This meant two practices each day during the week and a game or two on the weekends.

On a good night, about 10,000 fans cheered on Burgos at a home game. But, they were loyal and enthusiastic, demonstrating that Spaniards could indeed love a team that played something other than fútbol in a soccer-mad country.

The Burgos fans showed a lot of love for Smith. The team retired his jersey. Smith enjoys the same honor from Suffolk (Va.) High School, his alma mater, and from Pfeiffer.

After Smith’s days as a professional basketball player ended, he began working as a special education teacher at Lakeland High School in Suffolk. His specialty was mentoring children with behavior problems: “You have to figure out what’s going on with each kid individually. Every kid’s situation isn’t the same. Communication is the key.”

Smith also served as the assistant coach of Lakeland’s boys basketball team. This enabled him to coach his son, a point guard named Tony Smith Jr., for two seasons.

Smith’s stint at Lakeland lasted until last year. He’s now helping his wife, Angela, with her business: Suffolk-based 1st Class Home Healthcare, LLC. Since 2014, 1st Class has overseen an army of nurses who care for elderly patients in their homes. The nurses of 1st Class do everything from making sure patients take their meds to bathing them.

1st Class is doing well, having grown to include two offices and more than 60 employees. Smith’s duties for the company are varied. He might order a special bed, or he might stop by a home to make sure a patient is pleased with the services they are receiving. Smith said that good communication is the key: “Every patient’s situation is different. So, you sit down with their family and set out a plan. What do you need? What do you want to be done here?”

Away from work, Tony Smith plans to keep traveling with his wife. The couple has already visited such places as New Orleans and Las Vegas, and they returned to Spain to watch Smith’s Burgos jersey be retired.

Along the way, Smith will also likely reflect on his time at Pfeiffer.

“It was the best four years of my life,” he said.