Norwood Police Department reports a man tried to kill someone with a machete Monday evening on North Kendall Street.

Police responded in reference to a man with a machete and fight in progress.

Police identified Nathan Harris as the suspect, but he fled on foot before officers and Stanly County Sheriff’s deputies arrived, a press release stated. Both agencies canvased the area and found Harris hiding in a house nearby. 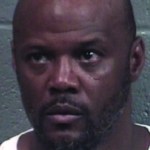 The victim suffered double amputation of two fingers during the assault, police said. The victim, who was transported by Stanly County EMS to Carolina Medical Center, Main, Charlotte, was treated and released.

Harris was arrested for assault with a deadly weapon with intent to kill, inflicting serious injury. He is being held in the Stanly County Ralph McSwain Detention Center under a $150,000 secured bond.