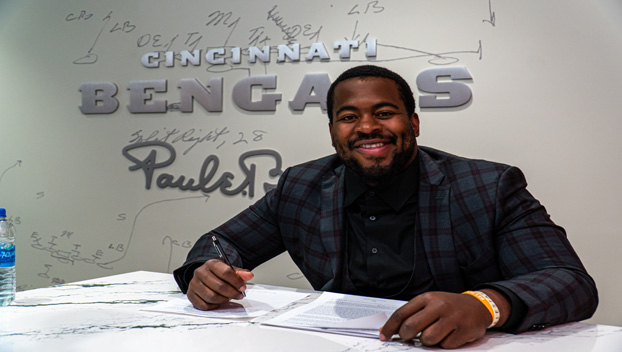 After a frenzied flurry flung open NFL free agency for the Bengals Monday, they pressed pause Tuesday as they scanned the tight end field. That gave them time to celebrate the signing of defensive tackle B.J. Hill.

This is just one of the reasons Hill wanted to come back to the Bengals: 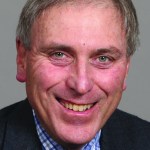 On Tuesday, before signing his three-year, $30 million contract at Paul Brown Stadium, he cooled his heels for a few moments with defensive line coach Marion Hobby.

The rest was about family. Hill and his two children still in diapers. Hobby and his daughter’s run to a top seed in the NCAA women’s basketball tournament playing for Hill’s alma mater of North Carolina State.

In Hill, they’ve got a guy on a second deal who wowed them last season with his versatility backing up Larry Ogunjobi as the three technique. While they would have loved to retain Ogunjobi and his seven sacks that are now in Chicago, they’re just as pleased to keep Hill’s 5.5 sacks, his stoutness against the run and what Hobby calls his “position flexibility.“

Hill’s also versatile in his dress. He flew up from Charlotte for the signing wearing a new dark suit.

He almost wore the orange one he wore to the Super Bowl (“hardly anybody saw me wear it”), but he went with the new threads for a new deal. It suited him just as much as the Billy Price trade that brought him to Cincinnati on the eve of the season six-and-a-half months ago.

“l didn’t know what I was getting until we got him into (the first) game,” Hobby said. “He was behind everyone because he didn’t know what we were running. He took off that very first game. He showed what he could do naturally. He hadn’t really grasped the system. He was just playing football. That’s what you want to see as a coach. Let them play football and then teach them the ins and outs of the system.”

In that first game on 24 snaps, Hill flashed that production the Bengals became accustomed to weekly. In his first game in the defense, Hill sacked Vikings quarterback Kirk Cousins twice, breaking in his rock-the-baby celebration he picked up from the NBA’s Russell Westbrook.

“His attention to detail. He makes me want to get in on the details,” Hill said. “From everything. Footwork to hand work. To just everything. He’s detailed in his work. He wants to be perfect. Even though he knows you’re not always going to be perfect, he wants you to strive for that in everything you do and that’s what elevated my game. He just got me to take the next step forward.”

Last year was Hobby’s first in Cincinnati and his impact was stunning on a line that under him became a strength and a headache for offensive coordinators. He’s grateful he had both Ogunjobi and Hill and knows replacing Ogunjobi is a big challenge. But he thinks Hill is up the task of playing the 700 or so snaps Ogunjobi took, only 200 more than Hill took last year.

“Larry will be missed. I texted him this morning wishing him well. I really appreciated the way those two guys showed up and worked hard every day,” Hobby said. “(Hill) is a three-down player. His numbers (snaps) are going to go up, but we’ll get some guys to keep them fresh so he can play at a high level.”

Another reason Hill likes it here is the culture Hobby has built on the line. You get the idea when you read what North Carolina State women’s basketball coach Wes Moore says about Hobby’s daughter Camille, his sophomore backup center, coping with limited time.

“Nowadays a lot of kids would have left,” Moore was quoted as saying last week. “Camille has been loyal and hardworking, so that’s why when we get a chance to get her in, I have a lot of confidence in her and know she’s going to bring some good things to the floor.

“I know she’s disappointed that she doesn’t play more, but I don’t think I’d want it any other way. She keeps coming back.“

Hobby is delighted Hill is back.

“It’s well deserved for working hard,” Hobby said. “He couldn’t stop smiling. He’s excited about coming back and so am I.”

Editor’s Note: This report on B.J. Hill was reposted thanks to Bengals.com. The original version can be found HERE.