TRAVELS WITH TOBY WEEK TWO: Eastbound and (Up and) Down 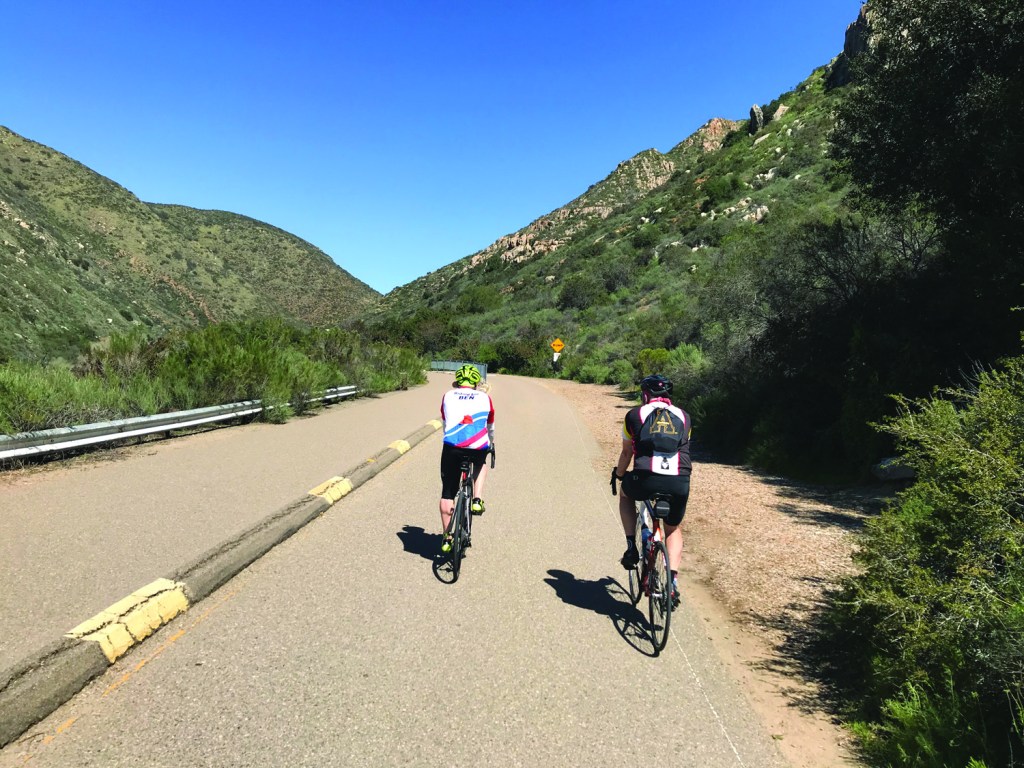 Day one of a long-anticipated journey has arrived. 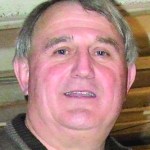 After giving our bicycles a good cleaning to clear the road grime they had gathered on the bike carrier, we headed out for Ocean Beach, where the San Diego River Bikeway awaits. From the campsite, it was about a five-mile pedal trip, and fairly easy to boot.

We knew we would have some climbing ahead of us. Even so, a rude awakening was in store.

On the East Coast (the only coast to which I had been), first you have the beach. Next you have approximately 10,000 miles of pancake-flat farmland called “The Coastal Plain” before you enter what is known as “The Piedmont.”

“The Piedmont” runs for the next 10,000 miles and consists of rolling hills…some steep enough to make a cyclist grumble, others barely noticeable.

Next comes “the Foothills,” which only last about 5,000 miles and consists of hills that are mostly aggravating (unless you’re going down them), but still generally can be scaled with a little better-than-normal effort.

Then come “the Mountains,” which are beautiful to see, but an absolute bear to pedal for any sustained length of time. (My fellow cyclists, Mike and Earl, both from Boone, feel differently).

In my experience, riding on most mountain roads requires several very low gears and the willingness to hear your leg muscles call you names that cannot be printed in a family newspaper.

On the West Coast (just like the East Coast), first you have the beach. Next you have the “Western Coastal Plain,” which is approximately 25 feet of flat land. Forget “Western Piedmont” or “Western Foothills,” they don’t exist. The “Western Mountains” begin at that point. And they go up, and up, and up some more, and just when you think it’s time to get off the bike and rappel back down to the beach, you see a sign along the road that reads “9% GRADE NEXT TEN MILES. USE LOWER GEARS.”

I had run out of lower gears five miles back.

By the time we reached our first overnight stop, the Alpine Hills RV Park, we were exhausted but had a great feeling of accomplishment at having persevered all the way. After getting some supper in me, it took approximately .02 seconds to fall asleep.

Starting out from Alpine on Saturday, the climbing continued, but we had something to look forward to later in the day … an extended downhill. Anticipation would keep us going for the next 60 miles.

For most of our trip, we pedaled along mountainous terrain within sight of the US-Mexico border wall.

Population is sparse and vegetation is non-existent through most of this area. Traffic was light as well, with most cars being law enforcement or border patrol agents.

The last seven miles of the trip were outstanding, as we descended over 3,000 feet along a bike lane adjacent to Interstate 8, which we had traveled coming in. After two days of hard climbing, it was nice not to have to pedal for a while.

Our overnight station was in the parking lot of the Red Feather Grill in Ocotillo, California, where the primary activity for the locals was doing “burn outs” in their dune buggies down a deserted main street. The area appeared to be very poor, with only a gas station, a grill, a bar and some abandoned buildings.
The town is located on the edge of the Yuha Desert, a long, desolate stretch of land with few residences and no crops, cattle or other farming evident to us. While I don’t see the draw to this town, I’m sure those who live here must love the place.

Leaving Ocotillo, we headed further east, eventually leaving the Yuha Desert and entering the town of Calexico, which, as you may gather from its name, sits directly on the border. Calexico seemed to be a booming town, both in the city and out, and irrigation canals seemed to make possible numerous farms around the city.
The need for networks of irrigation canals throughout southern California brought to mind just how blessed we in Stanly County are with the water resources we have. We should never take this resource for granted.

There are no RV parks or even many pull-offs in Glamis, so we picked up the bikes at the end of 70 miles, put them on the RV, and backtracked to the town of Brawley to spend the night. While the pedaling had been challenging and painful the first two days, today was remarkably flat … another thing to be thankful for.

This will be our last full day in California, as we cross into Arizona. But first, we must navigate more farmland along California State Highway 78.

Cycling in and around Stanly County, it’s not unusual to encounter drivers who feel that we have no business on the road, and who are quick to let us know it. But we have been pleasantly surprised by the overall courtesy most drivers have shown us here, even in rural areas where there are no bike lanes or greenways. Could it be that the people out here are more accustomed to seeing cyclists and sharing the road with them?

Some of the home-folk drivers could stand to take lessons from the Californians.

After passing through a couple of towns with big-sounding names but small populations (Palo Verde and Ripley), we expected our end point, Blythe, to be diminutive as well, but found it to be another vibrant and cyclist-friendly city. It sits on the border of Arizona right beside the Colorado River and serves as a gateway community for tourists entering either of the two states. After a night here, we will check our first state off the list.

The first couple of days of this trip were a bit chilly, but since we have come down to lower elevations, it’s borderline hot. Earl hasn’t said much about it, but Mountain Man Mike thinks it’s sweltering hot.

Of course if I still lived in Boone, I’d probably agree with him. But since moving back to Albemarle 30 years ago, the temperatures here (high 80s in the daytime) feel absolutely wonderful to me.
Arizona isn’t California (prices are lower), but otherwise, the terrain looks the same. The main differences are the enormous cactuses (cacti?) that dot the landscape.

Another thing that California does that Arizona doesn’t is Daylight Saving Time. Before now, I’d never been further west than the Central Time Zone, and was even confused by that. So our group spent more time than we should have bickering about what time it would actually be when we crossed into Arizona. Eventually, we reasoned that since California had “sprung forward” on Sunday, and Arizona (a Mountain Time Zone state) did not, the time should not change when crossing the state line.
Accurate or not, that’s what we decided and we are sticking to it.
Tomorrow will be our sixth day of pedaling, and we have planned to take every seventh day for a rest day. Our end point is Wickenburg, about 50 miles northwest of Phoenix, where we will have a day off before cranking it back up on Friday.

After spending a night at an RV park in Winden, we mounted our two-wheelers and headed down US 60 in the general direction of Phoenix.

All along this route, with very few exceptions, the roads in both states have had wide paved shoulders to accommodate bicycle traffic. Today was no different … wish NC would do the same along its signed state bicycle routes. It’s a lot less nerve wracking when a tractor trailer passes you and you are 10 feet away as opposed to three feet.

Keith Holloway, our RV driver and all around good guy, has been a life-saver, especially on these warm days. If we have a 70-mile trip, he travels up the road ahead of us about 15 miles and waits.
By the time we reach him, we are usually ready to refill our water bottles, grab a snack and get off the bikes for a few minutes, after which we jump back on the bikes and do another 15-mile stretch.
Keith is a UNC sports fan (much to the chagrin of Mike), and is retired after a long career as a teacher and coach in the Cherokee County (NC) schools. He has been dependable as the sunrise, and we are thankful to have him along. 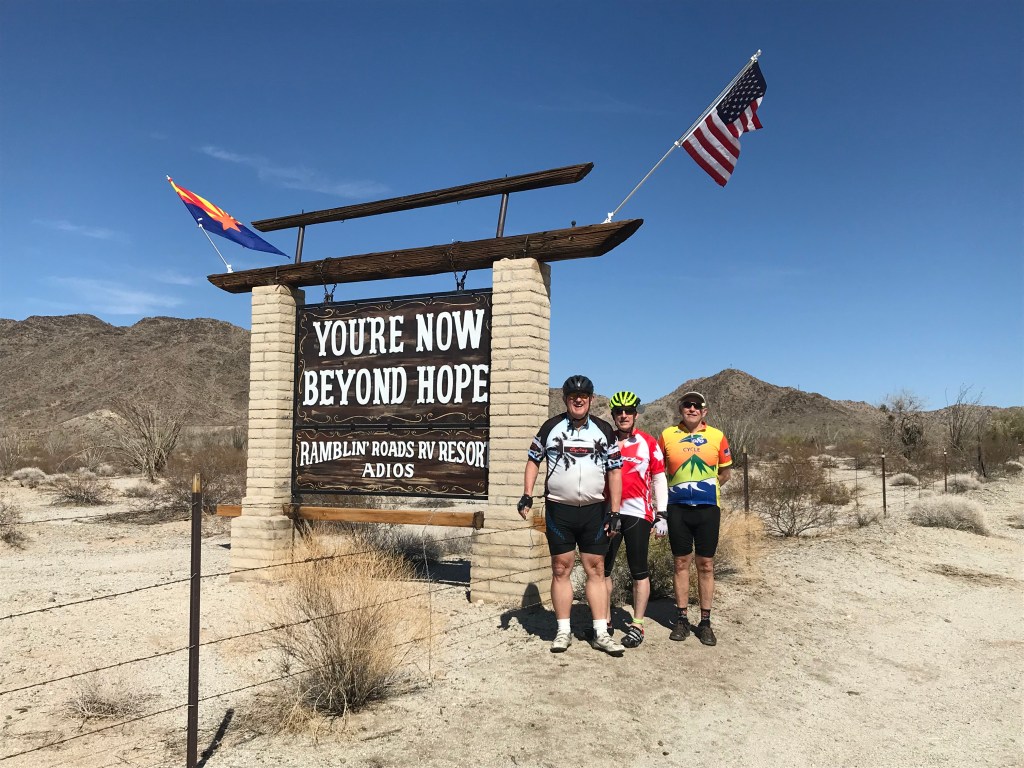 As we sit in the Desert Cypress RV park in Wickenburg (“The Dude Ranch Capital of the US”), we are looking forward to a day out of the saddle on Thursday. But on Friday we will once again mount up and pedal on, with one week and one state behind us and seven weeks and seven states ahead.

CLICK HERE FOR LAST WEEK’S INSTALLMENT OF THE SERIES.

Toby Thorpe is a retired parks and recreation director and a freelance writer for The Stanly News & Press. He will file reports from the road for The SNAP. To donate to his fundraising effort (the Annie Armstrong Easter Offering – North American Missions Board), visit https://www.namb.net/give or www.northalbemarle.com/ways-to-give. Follow along as well using #pedaling4annie.

DOUG CREAMER COLUMN: I get paid to talk, and…