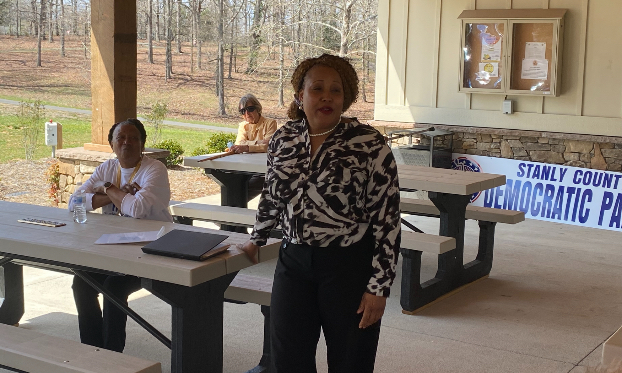 At the Stanly County Democratic Convention Saturday afternoon at New London Memorial Park, candidates running for a variety of races met with about 40 supporters to make their pitch as to why they should be elected come November.

Todd Lowder, the chief magistrate of Stanly County who’s been involved in law enforcement and the courts for more than 30 years, is running for Clerk of Superior Court, hoping to replace long-time incumbent Michael Huneycutt, who will not seek another term.

He is one of two local Democrats on the ballot, the other being sheriff candidate Davara Ponds. Three Republicans are competing in the primary to run against Lowder in November.

Lowder spoke about the importance of needing more Democrats competing against Republicans. With roughly 9,000 registered Democrats in the county, the party makes up about 21 percent of all registered voters, according to state voting data.

“It’s an uphill battle for me and it’s a shame there’s not more Democrats on the ticket,” he said. “We should put somebody on the ballot for every position.”

His campaign is at least going to be bipartisan in one respect: His wife, who was in attendance at the convention, is a registered Republican. 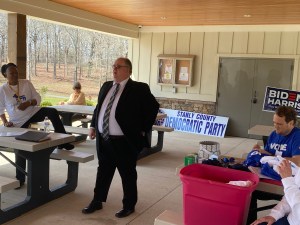 Tangela Morgan, a North Stanly High School alumna now residing in Rowan County, is running for N.C. Senate District 33, where she is competing against Republican incumbent Carl Ford, who is seeking his third term. She is a guidance counselor at Salisbury High School.

She told the crowd she is the best candidate to represent the citizens of Stanly and Rowan counties because she can relate to them.

“I think I am more closely in tune with the population that the position serves,” she said. “I grew up here so I have roots in Stanly County and I now call Rowan County home.”

She mentioned that a thriving community to her is one where its residents are healthy, educated and employed.

The most high-profile of the candidates who spoke was former North Carolina Supreme Court Chief Justice Cheri Beasley, who is running for U.S. Senate. If she were to win, she would make history as the first Black senator from North Carolina.

Beasley mentioned the Senate race in N.C. is one of the top three most important races in the country and could tip the balance of power to which party wins. Several Republicans are competing to win the primary and campaign against Beasley, including former governor Pat McCrory and U.S. Reps. Ted Budd and Mark Walker.

“I’ve seen how Washington has failed the people of North Carolina and I know it’s time for that to change,” Beasley said. “We need somebody in Washington who’s not afraid to stand for what’s right, who will lead courageously and who will stand for the issues that we care deeply for in North Carolina.”

Among the issues she’s concerned about are better access to healthcare, good education, reliable broadband internet, especially in rural areas, and taking care of service members, particularly those deployed to conflict-riddled regions. 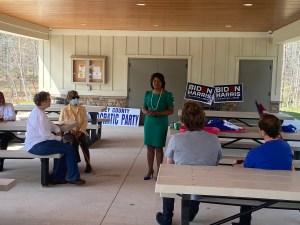 While Democrats have historically struggled to win in Stanly County, Taylor is still hopeful about this year.

“With politics, you never know,” he said. “If we knew, we wouldn’t need to have elections.”