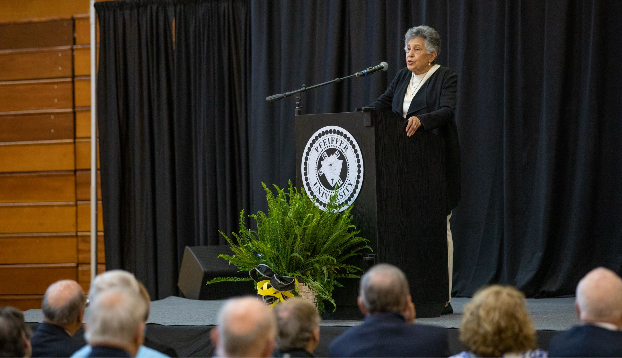 Despite growing up in the Jim Crow South in Little Rock, Arkansas in the 1940s and 1950s, where she had to sit in the back of the bus and use separate bathrooms and water fountains from white students, Carlotta Walls LaNier’s parents always instilled in her the importance of getting an education.

“Fortunately I had parents who told me I was just as good as the next person and that change was going to take place,” she said. “So from the cradle on, I was also told by my parents that the road to success was through education.”

With the Brown vs. Board of Education decision by the U.S. Supreme Court in 1954 declaring segregation in public schools unconstitutional, schools across the country were having to come to terms with how best to handle integration.

In deciding to register to attend Little Rock Central High School for the 1957-58 school year, “this was my opportunity,” she said. “This was the crack in the door…for me to take.”

And she took it. Despite the abuse and torment she suffered from so many, LaNier was one of the “Little Rock Nine,” who were the first Black students to attend Central High School.

LaNier recounted her experiences at the school before a crowd of about 500 in Pfeiffer University’s Merner Gymnasium Monday morning as part of the Eugene I. Earnhardt Speaker Series, honoring the late professor emeritus of history who taught at Pfeiffer for 30 years.

During opening remarks, Pfeiffer President Scott Bullard mentioned that opportunities for hearing firsthand from people who played key roles in shaping history, such as LaNier, are getting exceedingly rare as these icons are growing older. He encouraged the students in the audience to “soak in” the moment and “ponder what her words mean not only for American history but for the ways we conduct our lives today.” 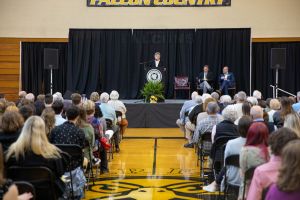 While 114 Black students in qualifying neighborhoods initially signed up to attend Central High School, which had the distinction of being one of the top 40 schools in the country, by the time school was set to begin only nine students were selected to integrate the school. Aside from LaNier, the other eight students were Ernest Green, Minnijean Brown, Elizabeth Eckford, Thelma Mothershed, Melba Pattillo, Gloria Ray, Terrence Roberts and Jefferson Thomas.

A 14-year-old sophomore at the time, LaNier was the youngest of the nine students.

When integration began on Sept. 4, 1957, LaNier recalled Gov. Orval Faubus calling in the the Arkansas National Guard to protect the citizens, but his motive was making sure the Black students did not enter Central High School. LaNier and her peers also faced an angry mob of more than 1,000 white people protesting the integration effort.

Thurgood Marshall, who was the head of the NAACP’s Legal Defense Fund and would later became the U.S. Supreme Court’s first African-American justice, appeared in Little Rock on Sept. 20 requesting an injunction against Faubus’ use of troops to prevent integration.

The situation became such a national news story that eventually the federal government got involved. President Dwight D. Eisenhower ordered 1,200 troops with the 101st Airborne Division to come to Little Rock to escort the students to school. After several previous attempts, the nine students entered the school Sept. 25.

Even with armed guards stationed in the hallways to protect the nine students, they still were harassed and bullied by their white peers, including being pushed down the steps, thrown into lockers and spat upon. LaNier remembers one white student enjoyed walking on the back of her heels. To counter this student, LaNier learned to walk fast and to slow down at times, so the student would fall into her. Due to her speed, LaNier later discovered the guards referred to her as the “roadrunner.”

Green was the first African-American to graduate from Central High School in May 1958, LaNier said. To illustrate just how prominent the nine students had become, Dr. Martin Luther King Jr. came to the graduation and sat with Green’s family.

The Little Rock community, including the police, continued to harass LaNier, her family and the other students during their tenure at Central High. At one point during her senior year in 1960, LaNier’s home was bombed, though no one was injured. Despite the bombing, LaNier continued going to school.

LaNier became the first Black female to graduate from Central High School in May 1960. She went on to study at Michigan State University and completed her bachelor’s degree at the University of Northern Colorado in 1968.

The Little Rock Nine have come back to the city several times over the years, including in 2017 to celebrate the 60th anniversary of the integration of Central High.

LaNier is the recipient of the Congressional Gold Medal, which is the nation’s highest civilian honor, the Spingarn Medal, which is awarded annually by the NAACP, and has been inducted into the National Women’s Hall of Fame.

As she concluded her speech, LaNier offered a challenge to the many students in attendance. “I want you to channel Gene Earnhardt: Know your history and your country’s history,” she said.