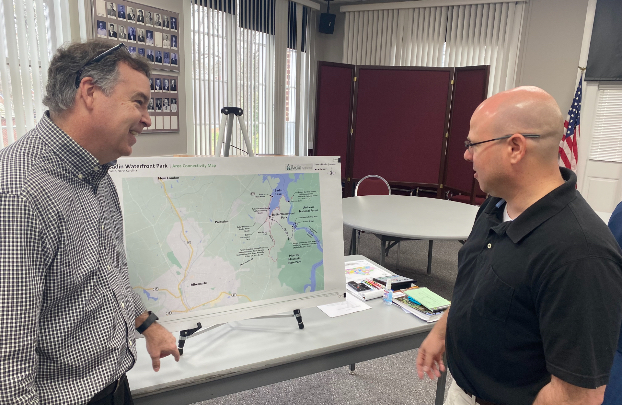 Residents from Badin came out Saturday morning to the Aloca Conference Center to learn more about the plans for a new 14-acre waterfront park the town is looking to construct.

The park will be situated at the old Badin ballfield behind town hall and will run up to the boat ramp area.

Some of the key amenities that will be featured include a quarter-mile walking trail, two playgrounds, a multi-purpose pavilion, three picnic shelters, new boat docks, fishing piers, a spray ground where kids can get wet and about 125,000 square feet of green space. Plenty of parking space would be included and existing infrastructure like the ice and coal storage structure would remain in place.

Many of the amenities, such as the pavilion and playgrounds, came from suggestions offered up by residents during a community input session in November.

Entry points to the park would also give visitors easy access to the Badin downtown area and the museum complex.

“It’s a big park, thoughtfully and professionally planned in a beautiful location with lots of public input and lots of recreational potential, so the full result should offer impressive regional-scale impact,” said Town Manager Jay Almond. 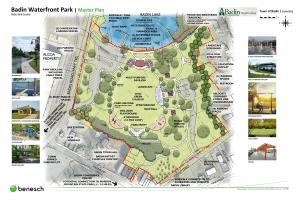 Badin’s master plan for its new park was adopted by the town council during its meeting this month.

The master plan, which was adopted by council during its meeting earlier this month and includes a 10-year vision, was designed by Benesch, an engineering consulting firm from Charlotte. The company has worked on several regional projects, several of which have been parks including Dale Earnhardt Plaza in Kannapolis and Robert C. Bradford Park in Huntersville, according to its website.

The town originally crafted a plan for a new park about a decade ago in the same area, Almond said, but because it did not own the land, officials could not apply for a North Carolina Parks and Recreation Trust Fund Grant. That changed last summer, when the Badin Business Park donated the 14 acres to the town.

The total build-out of the park will cost approximately $4 million, according to Jeff Ashbaugh, senior project manager with Benesch. But none of the financing will come at the expense of the town or its residents.

The funding for the park will come in multiple phases from the North Carolina Parks and Recreation Trust Fund (PARTF) and budgeted state allocations, including $1 million the town received as part of the state budget to improve its marina. The town plans to apply for the maximum amount of $500,000 in the coming months for the PARTF grant. Applications are due by May 2.

If the town were to receive the PARTF grant later this year, Ashbaugh estimates the ground breaking for the park would begin soon after. He couldn’t speak to when the full project would be finished.

“It is a phased project, so the implementation is dependent upon the funding,” Ashbaugh said.

Once all the phases have been completed, Almond said the park should be able to offer something for everyone.

“You want outdoor recreation, you want healthy opportunities for people, you want people of all ages to be able to come in and enjoy themselves,” Almond said.

Badin Councilman Demar Huntley said the park could be a “key income source” for the town, with visitors taking advantage of the restaurants and businesses nearby, and “it would also be a place for outsiders to come and actually enjoy what’s here in this part of the county.”

Huntley said the park would also provide a safe and secure place for kids to run around and play.