Gene Starnes honored, presented with key to the city of Albemarle 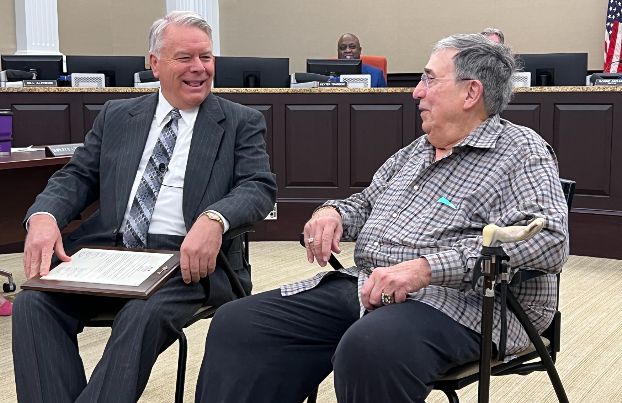 As he gets ready to close Starnes Jewelers after 124 years in business, the Albemarle City Council honored long-time owner Gene Starnes with an adopted resolution and a key to the city during its meeting Monday night.

Starnes was invited to sit with Mayor Ronnie Michael at the front of the room while each council member spoke about what Starnes has meant to the them and the city.

“All the years I’ve been involved, I’ve never known a time that you haven’t been there volunteering or doing something to support our city or a business downtown and we thank you very much for that,” Michael said.

Several council members mentioned that due to its great longevity, the business, which was opened by Starnes’ grandfather F.E. Starnes in 1898, has naturally become synonymous with the city. People from all across the world have visited the store over the years.

With all the radio spots Starnes has done over the years promoting the business, Dexter Townsend joked that he still wakes up in the mornings and hears his voice.

“I will say that Albemarle and our downtown is a much better place because of you,” Townsend said.

After comments from council members, Michael briefly allowed members of the audience to speak about what Starnes has meant to the community. One person mentioned that Starnes has been the “heart of Albemarle.”

In addition to his work as a jeweler, Starnes has been active in the local community and has served on numerous committees. He’s a member of the Albemarle Rotary Club, has served on the Albemarle Downtown Development Corporation board of directors and the Historical Resource Commission. He was selected as Albemarle’s Main Street Champion in 2008.

In brief remarks, Starnes thanked his family, his employees and all the loyal customers over the years.

“It’s been my pleasure, from the very beginning,” he said, before receiving a standing ovation from everyone in the room as he left.