Gray Stone students built their own cardboard boats, then raced them in Pfeiffer’s pool 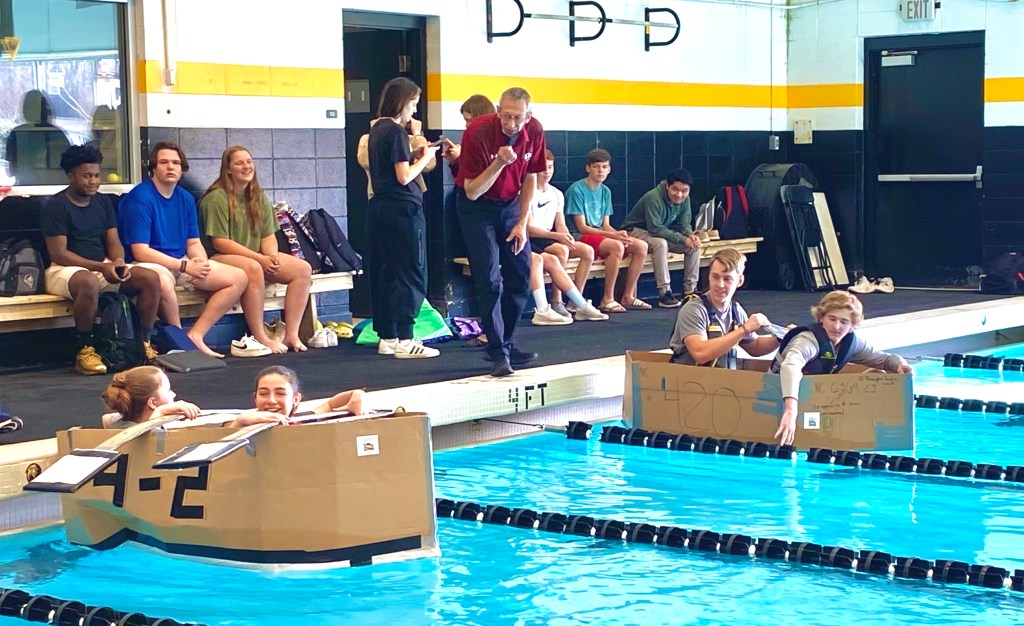 Jeff Brown talks with two groups of students before they start racing.

Gray Stone Day students in Jeff Brown’s Design Lab classes on Thursday morning took to the high seas — or in this case, the Pfeiffer University swimming pool — as they competed against each other in a fierce and at times immersive racing event.

Since January, students worked in pairs to design cardboard canoes that, thanks to the power of duct tape, would be durable enough to transport them from one end of the pool to the other and back as they raced against rival teams for the fastest times. The students had to stay in the boats for the whole duration of the race for their times to count.

“It was very strange,” said junior Abigail Storms about navigating across the pool in a cardboard boat. “It’s not something I thought I’d ever do.”

But over the years, students in Brown’s classes have used their imagination and utilized their STEM (science, technology, engineering and math) skills to design all kinds of projects. A few years ago, for example, his students created and raced soap box derby cars; they have also built homemade Da Vinci catapults and towers out of spaghetti.

As for the cardboard boats, each one could be no longer than 75 inches and no wider than 40 inches, but besides that, the students had the flexibility to be as creative as possible. Most of the boats were comprised of various triangular beams and included garbage bags attached to the bottom to provide extra insulation. Students also created a variety of paddle designs to cut through the water.

“For the boat project, really they were trying to learn general design and engineering, but in addition they learned things like buoyancy, Archimedes’ principle … and obviously they learned all sorts of construction techniques,” Brown said.

“These projects really push them hard on the engineering stuff and honestly on the teamwork,” Brown added.

Many of the students successfully navigated the two laps of the pool while others capsized as soon as they stepped into their cardboard craft.

“When I got in the boat, I was like, ‘I don’t know how this thing’s going to make it across the pool,’ but we did it,” said junior Olivia Eldridge, who along with partner Storms, finished first in her race.

Students first designed small prototypes and tested them out in a small pool Brown brought to class before scaling up to the full-size models.

“They could refine their design and change some things and build it into the big one,” Brown said.

“Size matters a lot,” said freshman Dean Parsons, on what he learned from the project, “because when we were building the prototype, everything was much smaller. It was more difficult to use and then once we went to the bigger size, it was easier but also harder because we had to deal with bigger cardboard.” 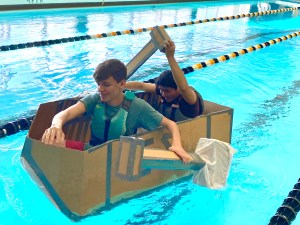 While the students no doubt enjoyed racing each other and testing the durability of their boats, Brown hoped the students learned the importance of concepts like engineering.