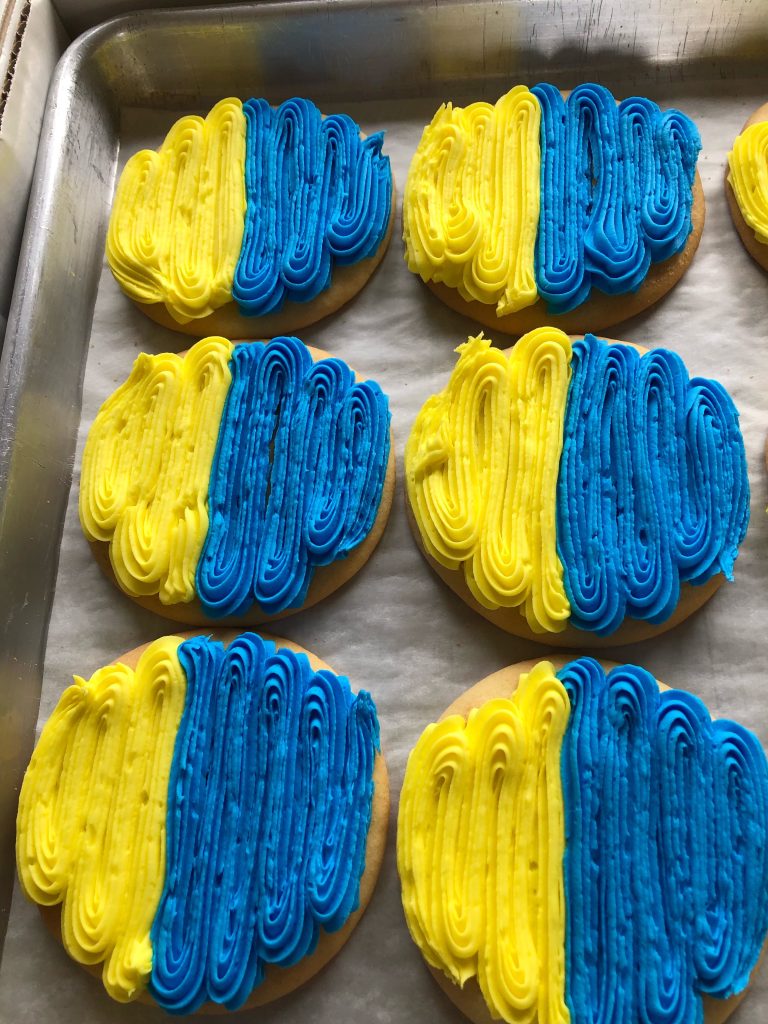 Gary Moran is selling T-shirts and cookies to raise money toward humanitarian efforts in Ukraine. Photo courtesy of Gary Moran.

Over the past three weeks, much of the world has watched the plight of so many Ukrainians trying to stay safe and care for themselves and their families amid Russia’s invasion of their country. More than 3 million people, many of them children, have fled Ukraine since the invasion began, the majority of whom have found refuge in Poland. The invasion has triggered the fastest growing refugee crisis in Europe since World War II.

People still in Ukraine, as well as those that have fled to other countries as refugees, are in need of assistance as the war continues.

Gary Moran, a retired teacher who is volunteering with Central United Methodist Church in downtown Albemarle, has been horrified with what’s been going on. So, he has spearheaded several efforts to raise money for refugees.

“I just see stuff going on in the world, and however little we can do, we need to,” he said. “Sometimes we get overwhelmed by the amount of need in the world and so I think we just take small steps to do what we can.”

Moran recently sold 100 “I Stand With Ukraine” T-shirts. He raised $2,300, which went to the United Methodist Committee on Relief, the humanitarian relief and development arm of The United Methodist Church which has teams stationed in Ukraine and surrounding countries.

Moran is set to purchase another 100 “Peace in Ukraine” T-shirts. He hopes to raise a few more thousand dollars for humanitarian relief. 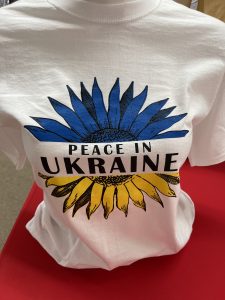 A “Peace in Ukraine” shirt that Gary Moran is selling to raise money for the humanitarian efforts. Photo courtesy of Peter Asciutto.

Vac & Dash owner Peter Asciutto said he was happy to collaborate with Moran to help raise awareness about what’s going on in Ukraine.

“It’s always great to partner with any member of the community to do something like this, especially for this cause,” he said.

In working to raise money to help people who have been displaced from their homeland and are struggling, “it’s just the human thing to do,” Asciutto added.

In addition to shirts, Moran is also selling 200 frosted sugar cookies decorated with the blue and yellow colors of the Ukrainian flag that were donated from the Albemarle Sweet Shop. People can purchase two cookies for $5. As of Thursday morning, Moran said he had  sold about 50.

Several people have also donated, with Moran mentioning that a person gave him $100 Thursday morning for four cookies.

The UMC bears all administrative costs so “when you donate to that organization, every penny goes to relief,” Moran said.

He added he has a few more ideas he’s working on to try and raise additional funds for the relief effort.

The cookies and shirts can be purchased at the church at 172 N. 2nd St.