A Concord man is in custody following a bank robbery Thursday afternoon, according to a press release from the Stanly County Sheriff’s Office.

Officials said they received reports about a robbery at First Bank on N.C. Highway 49 in Richfield around the same time law enforcement officers were heading to Pfeiffer University after receiving a report of an alleged active shooter on campus.

As the majority of law enforcement were working to secure the campus, where the students and staff were on lockdown, several officers were diverted to First Bank to check on bank employees, secure the scene and begin an investigation on the robbery. No shots were fired and no injuries occurred to any employee.

Officers from multiple jurisdictions conducted a building by building security clearance of the entire campus and determined that no shooting had taken place at Pfeiffer University and that the 911 call was fictitious.

Detectives on the scene of the bank robbery collected evidence and were able to identify the suspect as Kelvin Wayne Simmons, 45. Detectives verified that Simmons placed the fictitious 911 call reporting the active shooter at Pfeiffer as a form of distraction. Simmons left with an undisclosed amount of money.

Stanly County Sheriff’s Office detectives secured warrants for Simmons. With the assistance of the State Bureau of Investigation and Charlotte-Mecklenburg Police Department, he was found at the Days Inn on Sunset Road, near Interstate 77 in north Charlotte, where he was detained.

Simmons was charged with robbery with a dangerous weapon as well as filing a false report of mass violence on educational property. Additionally, Simmons was charged with outstanding warrants from Cabarrus and Rowan counties for robbery with a dangerous weapon, two counts of larceny of motor vehicle, felony larceny, hit and run property damage and fleeing to elude arrest. 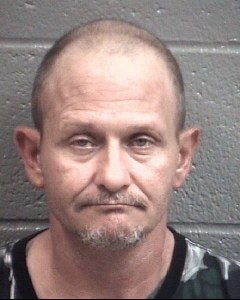 Kelvin Simmons was arrested after robbing First Bank in Richfield and making a false threat of an active shooter on Pfeiffer’s campus. Photo courtesy of Chris Huneycutt.

Pfeiffer’s response to the incident

In a statement from Pfeiffer President Scott Bullard posted on the university’s website shortly after the incident Thursday afternoon, he noted how thankful he was that “this situation was not worse and that we are all safe.”

“Although there was no evidence of a legitimate threat to our campus, the response was very real,” he wrote. “The emotions we felt during our brief lockdown were real. The text messages and phone calls to our loved ones were real. As we attempt to understand our experience better, may we always be reminded of the good in our lives and appreciate each day.”

He said that in the days to come, Pfeiffer will review and evaluate its response to the event. To help improve the campus response to any future incidents, Bullard encouraged all students and staff to download and utilize the LiveSafe Mobile app, the primary channel to communicate emergencies and alerts through text message, email, and push notifications.

“Thank you for looking out for one another and sharing our commitment to safety and truthful communication,” Bullard added. “As we look forward to a new day, we are grateful to be together again tomorrow.”