A look at the Hardaway Site – past, present and future 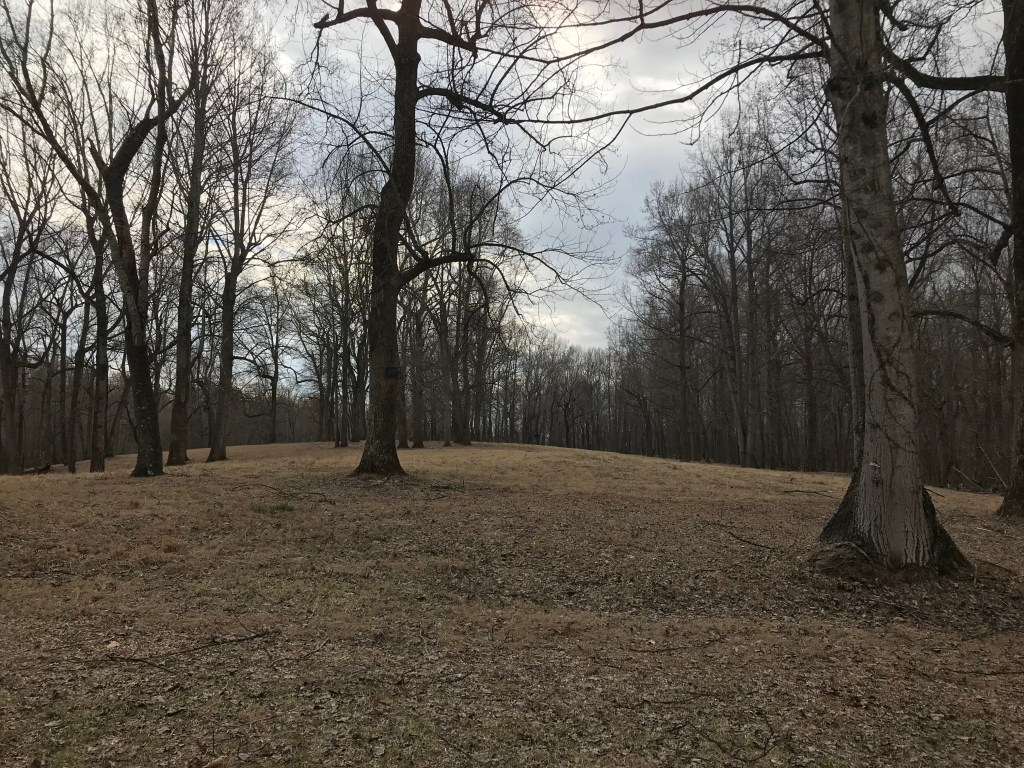 A North Carolina Historical Marker posted just past the Badin Lake boat launch area on N.C. Highway 740 identifies the Hardaway Site location as one mile northeast of the marker and significant for its occupation — as early as ca. 10,000 B.C.

The grassy, wooded parcel situated on a hill about 140 feet above Badin Lake comprises a small part of a thousand-acre donation made by ALCOA in 2020 to Morrow Mountain State Park. Between the tree trunks and boulders, only the squirrels and their forest friends enjoy a coveted lake view.

David Head looks to the future of the Hardaway Site. He’s the planning program manager for the North Carolina Division of Parks and Recreation which has responsibility for conservation, recreation and education related to North Carolina’s natural and cultural heritage. He is at work on an area plan for use of all the newly acquired acreage and recognizes Hardaway as an important part of that acquisition.

No public access road to the Hardaway Site exists, however, nor is there much to see, said Head.

The property has no visible evidence of any past occupants — no artifacts, no obvious features or signage for public interpretation, he explains. Uncontrolled access isn’t an option.

In collaboration with the state Office of Archaeology, Head is considering possible future escorted group tours accompanied by park rangers or educators to teach visitors.

“We are trying to figure out what interpretation will look like in the future,” he said, “but for now, we’ll leave it as it is.”

The last human occupants of that ridge high above the Yadkin River were employees of the Hardaway Construction Company hired more than 100 years ago to build the hydroelectric dam across “the narrows” gorge below. They lived in company-furnished tents, shanties and bunk houses until the Narrows Dam was complete.

By then, the Carolina Aluminum Company smelting operation was underway and residents of the new town of Badin wanted a place to plant vegetables. The company (now ALCOA) owned the town and the land next to the dam and gave their employees permission to cultivate the former camp site. Digging and planting soon unearthed small, pointed projectiles and primitive stone tools.

Longtime Badin resident and Badin Museum founder David Summerlin says those early Badin gardeners transitioned to collecting, only guessing at the significance of their discoveries.

The oldest spear-point in the Badin Historic Museum dates from 8,000 B.C. with a distinctive shape easily recognized as part of Badin’s town logo. That Hardaway side-notched point, and many others donated to the museum, were discovered by Badin residents who for years walked the surrounding fields and woodlands and had eagle-eyes. 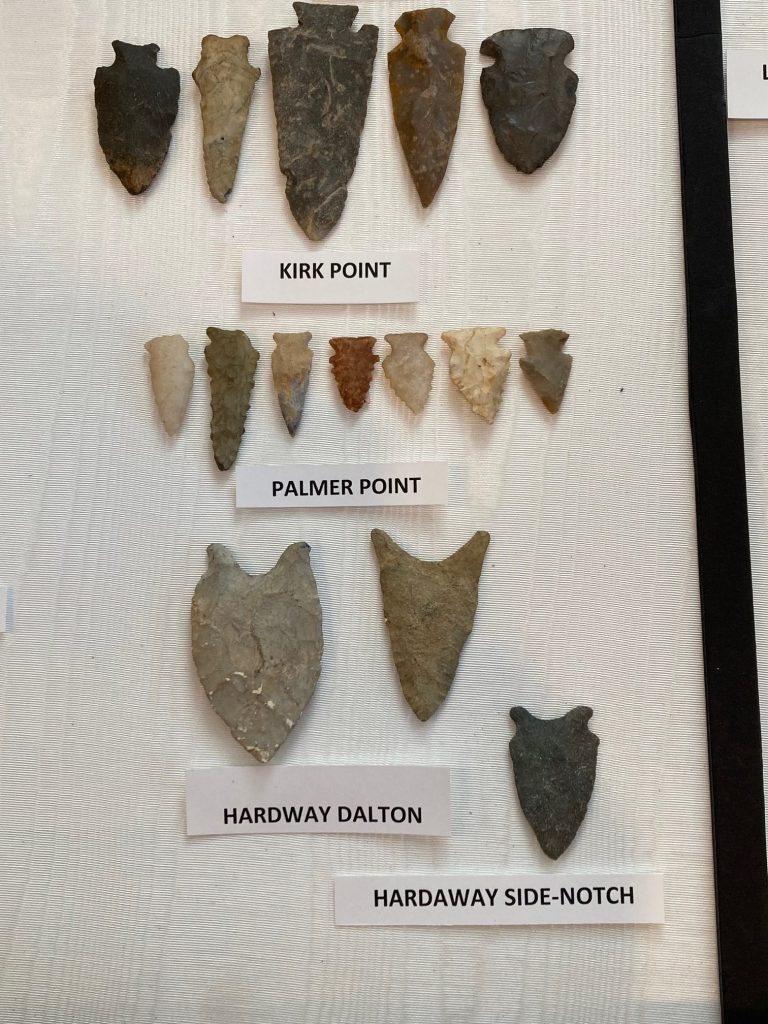 Shown is a small collection of arrowheads found in the Hardaway site area. (Contributed)

In 1937, an ALCOA engineer, avocational archaeologist Herbert M. Doerschuk, recognized the likely significance of the artifacts he and others were finding.

Doerschuk then notified Joffre L. Coe, North Carolina’s first professional archaeologist, but they made only a surface collection on the Hardaway land.

With graduate studies and World War II service, Coe couldn’t return until 1948 when he dug two five-foot test squares with help from archeology students at the University of North Carolina. Meanwhile, unauthorized relic hunters continued to remove artifacts from the site.

Coe’s investigations and supervision of the Hardaway project continued intermittently into the 1980s. For over 40 years, Coe had collected and cataloged chipping debris and thousands of stone artifacts which were eventually donated by ALCOA to the Research Laboratories of Archaeology at UNC-Chapel Hill.

In 1981, the Archaeological Resources Protection Act finally gave ALCOA a greater measure of support in protecting the land from trespassers and looters.

At a dedication ceremony Nov. 5, 1990, the site was designated a National Historic Landmark, automatically placing the property in the national Register of Historic Places and adding another layer of legal protection.

Archaeologists piece together information about prehistoric people from the materials left behind. From the projectile points and stone tools discovered at Hardaway, Coe was able to identify each distinctive tool and a sequence from young to old.

Coe recognized toolmaking dominated camp life. Later, Randolph Daniel, an archeological
doctoral student at UNC-Chapel Hill in the 1990s, went all over the Uwharries and eventually pinpointed heavily quarried Morrow Mountain as the place where the native tool makers collected rhyolite. It’s one of the few rocks that can be shaped by chipping away small pieces to form the edges, points and notches desirable for projectiles. The work of Coe and Daniel shows those early people hauled rocks about four miles upriver where the shad were plentiful, and they could combine chores and socialize in a well-protected place.

“Hardaway was, and is, immensely important to our understanding of the late Paleoindian and early Archaic periods of human occupation within the Southeast,” said Cranford.

He also notes the importance of preserving portions of sites so that new archaeological methods and techniques can be applied as new research questions arise.

People have spoken for years about the necessity for a museum in Badin to house artifacts from the Hardaway Archaeological Site, and now a growing work group, including the Town of Badin, is seeking an appropriation from the General Assembly to help make that museum a reality.

Central North Carolina is convenient to major urban areas but bereft of a North Carolina
History Museum. None of the state’s museums near the coast or in the mountains focus on
Native American history or archaeology. An architecture firm engaged by the town has drawn a preliminary plan concept illustrating the feasibility of a site in the town.

Town Manager Jay Almond said the need for a state museum in the town of Badin celebrating Hardaway artifacts and the culture that deposited them isn’t new, but ongoing work on the project has progressed to a level previously unrealized.

“It’s still early in the process,” Almond said, “but, the drive of this museum’s working group is strong, and everyone who’s been exposed to the project has been supportive. It’s a truly valid goal, all the pieces fit, and really, it’s long overdue.”

In the meantime, David Head encourages folks to explore the story of the Hardaway occupation by visiting the Morrow Mountain State Park Museum and talking with a ranger. A visit to the Badin Museum is also informative. Books authored by Coe and Daniel are helpful for serious inquiry. Online resources also exist through the North Carolina Department of Natural and Cultural Resources to aid parents and teachers and citizen archaeologists at ancientnc.web.unc.edu.