Doctors share stories of Stanly physicians from 1950s to 1980s 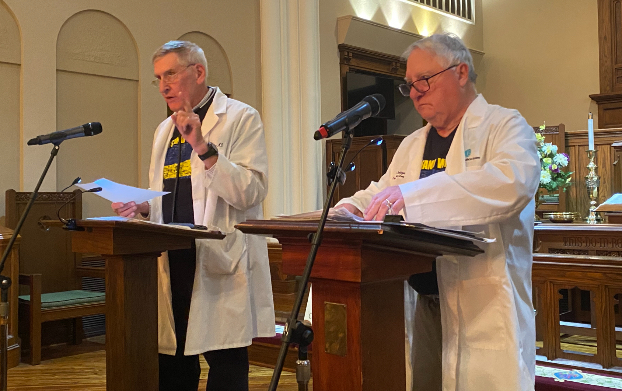 Doctors Eric Johnsen and Steven Seltzer talked about the many physicians who worked in Stanly County from the 1950s to early 1980s.

At the time, there were only 19 general practitioners and three general surgeons at the hospital — and they seemingly did everything. During what was referred to as “the golden age of general surgery,” these doctors performed all kinds of operations, made numerous house calls and worked around the clock to take care of county residents.

Even though the environment was still quite barren in the early 1950s — there were no specialists at the hospital, such as radiologists, pathologists and anesthesiologists, and life-saving machines such as ventilators and defibrillator and procedures like CPR were not around — several doctors made their way to Stanly County and helped lay the groundwork for the medical community that still exists today.

Speaking before an audience of close to 100 Tuesday night at Central United Methodist Church, Dr. Eric Johnsen and Dr. Steven Seltzer, wearing shirts featuring the blue and white colors of the Ukrainian flag, highlighted roughly 40 doctors in the second part of a three-part series titled “Health Care Heroes of Prior Decades: 1950-1980.” The last presentation of doctors from the 1980s through the present will take place sometime next year.

At a time when the county’s population was less than 40,000, one of the first notable physicians of the era was Dr. Thomas Kelley, a Massachusetts man who came to Stanly in 1949 to open a family practice. He kept busy doing all kinds of work including making house calls, delivering babies, helping in the emergency room and making rounds at the hospital.

“It goes without saying that he was one of the true icons of medical care in this community,” Seltzer said.

Dr. George Eddins, another northerner, began his career in Albemarle in 1951 when he opened the Albemarle Medical Clinic. He went on to establish one of the earliest coronary care units at Stanly County Hospital and was the first in the county to perform and electrocardiogram or EKG.

Eddins also was instrumental in originating the Stanly County Unit of the American Heart Association and served as medical advisor to the local American Cancer Society for more than 40 years. He received the Order of the Long Leaf Pine award in 2009.

While physicians tended to work by themselves and open their own practices, towards the end of the 1950s, a trend began developing where doctors started to partner with each other, especially those who had similar specialties. This allowed them to share maintenance costs, along with equipment and supplies. Kelley, for example, was one of three doctors, along with Dr. John Gaskin Jr. and Dr. Willis Ross, who founded Albemarle Family Medical Center in 1967.

Dr. Claude Ballinger was the first full-time practicing pediatrician when he opened Stanly Pediatrics Associates in 1959. In his 30 years of service, Seltzer said Ballinger took care of an estimated 10,000 young infants.

Several of the doctors who began working in the 1950s and 1960s had served in some capacity during World War II, and some were on the front lines. While in combat during the Battle of the Bulge in Germany, Dr. Joseph Ross, who practiced in Albemarle for 30 years, sustained a serious hand laceration. With no medics around, he sewed himself up, Johnsen said.

Diagnosed with testicular cancer in 1960, an affliction he only told his family about, Ross regularly traveled to Durham for treatments before coming back to take care of his patients.

“I don’t know how the guy was tough enough to do that,” Johnsen said.

Dr. Richard V. Lyles, a family medicine doctor who opened his first practice in Norwood in 1961 and later spent about 20 years with Albemarle Family Medical Center before retiring, was in the audience for the event. At 90, he is one of Stanly’s oldest physicians.

“The working definition of unflappable is Dr. Lyles, the guy never changed his disposition,” Johnsen told the audience.

While not a whole lot was known about Dr. Addison Magnum, a retired radiologist at Stanly Memorial Hospital who came to the county in 1965 and largely stayed to himself, when he died in 2012 he left his entire estate, worth more than $3 million, to the North Carolina Zoological Society. As a result of his donation, the Sonora Desert exhibit at the zoo was rededicated in Mangum’s honor.

Dr. John Gaskin Jr., a primary care physician in Albemarle and Locust who came from a family of doctors, was the first physician in the county to employ a nurse family practitioner. He was also the team physician for the Albemarle High football team for 23 years.

Aside from his career in Stanly County, Gaskin flew 35 combat missions during the Korean War including one where, as the final aircraft in a bombing run, his aircraft was hit by North Korean enemy fire. He successfully ejected from his aircraft and was rescued from the Yellow Sea by a helicopter pilot who also had the name of Gaskin.

Gaskin also volunteered to serve as a physician in South Vietnam for two months during the Vietnam War.

Several other notable physicians were mentioned, including Dr. Robert Gaither, until the presentation ended after more than two hours with the two speakers briefly talking about each other.

Originally from Iowa, Seltzer came to Stanly in 1978 to work at the Albemarle Family Medical Center. He retired a few years ago.

Johnsen, a Michigan native who’s been a Stanly resident since 1980, will be leaving Albemarle with his wife in the coming months for Knoxville, Tennessee to be closer to their youngest son.

“There’s going to be a hole in Albemarle when the Johnsens leave,” Seltzer said as the crowd applauded.