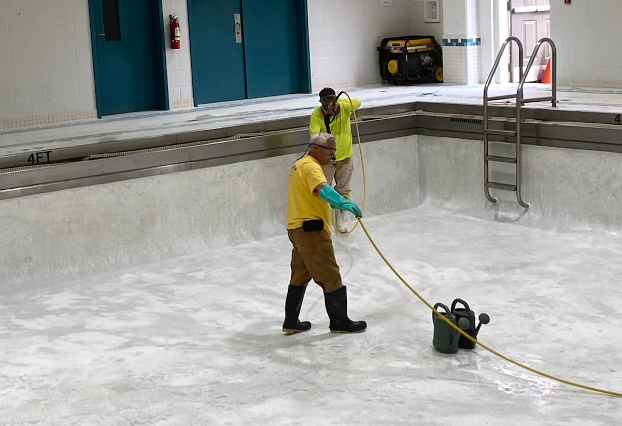 New tiles and lighting were installed in one of the pools at the YMCA last year. Photo courtesy of George Crooker.

Since the pandemic began locally in March 2020 the Stanly County Family YMCA has had to adjust and make changes, but its core mission of providing a place of community for people to come together remains as tight as ever.

“We continually try to make this community better,” said CEO George Crooker, who has overseen the facility for almost 12 years. “We’re here to help.”

A key part of assisting the community is through improving the YMCA facility, which has been around for more than 70 years. Beginning with the renovation of the C.B. Crook Pavilion, much of which took place before the pandemic, the Y has been working on several projects to improve various aspects of its building.

“We’ve been doing some renovations this whole year pretty much,” Crooker said in late 2021. “When you have a building that was originally built in 1950 and added on to in the early 1990s, that’s a lot of years and a lot of people coming through.”

There have also been new basketball goals installed in the gym. They can be lowered to eight feet, “so when little kids play, they can shoot correctly,” Crooker said. 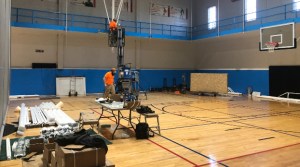 The YMCA is also looking to add new cardio and weight equipment.

With its operating budget more limited than in years past, many of the renovation projects were completed thanks to donations from people in the community and through grants.

Crooker has several projects planned for this year, but he could not go into specifics. He  mentioned the YMCA is revamping its strategic plan, which has not been updated since before the pandemic. Looking into the future, Crooker said he would like the Y to have more of an impact across the county beyond just Albemarle.

“We need a plan of what we’re going to do to continue to be relevant and help people,” he said. “We just want to be the best we can to serve people and have top-notch facilities.”

Impact of the pandemic

The YMCA is still going strong, despite the many obstacles that have surfaced over the past two years with COVID.

“When life throws you a curveball, you learn how to hit them,” Crooker said.

Foot traffic is about 70 percent of what it used to be before 2020, but that is actually better than most other YMCA facilities across the state, Crooker said.

“I think a lot of it is because of the size of our community and the allegiance from our community,” he said.

While he is looking forward to more people coming back, he knows it’s up to each individual’s assessment of how safe they feel.

“The last thing we want anybody to be is uncomfortable one way or another.”

Since the pandemic began, staffing has been reduced by at least a third, but it has not deterred employees from carrying out their duties. There are currently about 140 employees, down from around 180 pre-pandemic.

“The strain on our staff has been tremendous yet they have performed like troopers,” Crooker said, referring to them as “servant leaders.”

To keep people as safe as possible, the facility is sanitized around the clock and deep cleaning takes place several times a week.

Though the YMCA is in a better position now than it was at the end of 2020, he said, Crooker is concerned about the near future, especially with the presence of the new coronavirus variants.

Despite the many challenges, the YMCA continues to serve the public, in whatever way possible. One example is that scholarships are available to make sure everyone can afford the services.

“What we do here is serve, plain and simple,” Crooker said. “We have to take the variables that we can’t control, and try and put it in something that we can, just like everybody else.”

One key silver lining of the past two years is that it has made Crooker more appreciative of the little things, such as spending time with his family and letting his staff and patrons know how much he appreciates them.

“When hard times hit, you find out who your friends are,” he said. “And we’ve found out who are friends are and hopefully we won’t forget that into the future.”