SPIRIT OF STANLY: Prudden’s passion for education resulted in the founding of several schools, including Pfeiffer

When it comes to Pfeiffer University, few names are as inextricably tied to the institution as founder Emily Prudden.

A statue of her stands in front of the administration building, with her hands clutching several books, an apt portrayal since her lifelong passion for education helped lead to the creation of several schools in North Carolina.

Born in New Haven, Connecticut in 1832, Prudden spent the first part of her life raising the children of her dead sister. Once they were older, she was invited by friends in 1882 to teach at the Brainard Institute in South Carolina.

“She got down there and realized pretty quickly that this was something that she could do,” Pfeiffer University Archivist Jonathan Hutchinson said. “She had found her calling.”

Although not much is known about Prudden’s academic career, Hutchinson said she at least finished high school. She came from an affluent family, with one of her direct ancestors having played a key role in the early days of Congregationalism.

After soaking up as much knowledge as possible about what it takes to operate a school, Prudden sold her inheritance and moved to North Carolina to start building her own.

In 1884, at the age of 52, she opened All Healing Springs School in Gaston County. This was the first of at least 15 co-ed schools she established. The curriculum at the schools often included French and Bible classes.

Prudden would typically get each school running on a $300 budget, according to a 2013 Stanly News & Press article about Pfeiffer’s first 50 years.

“She wanted to give students, especially in the South, educational opportunities that she had,” Hutchinson said.

She did all this despite some key hindrances: She was nearly deaf for most of her life and needed two canes to walk due to an accident during her teenage years resulting in her having arthritis. 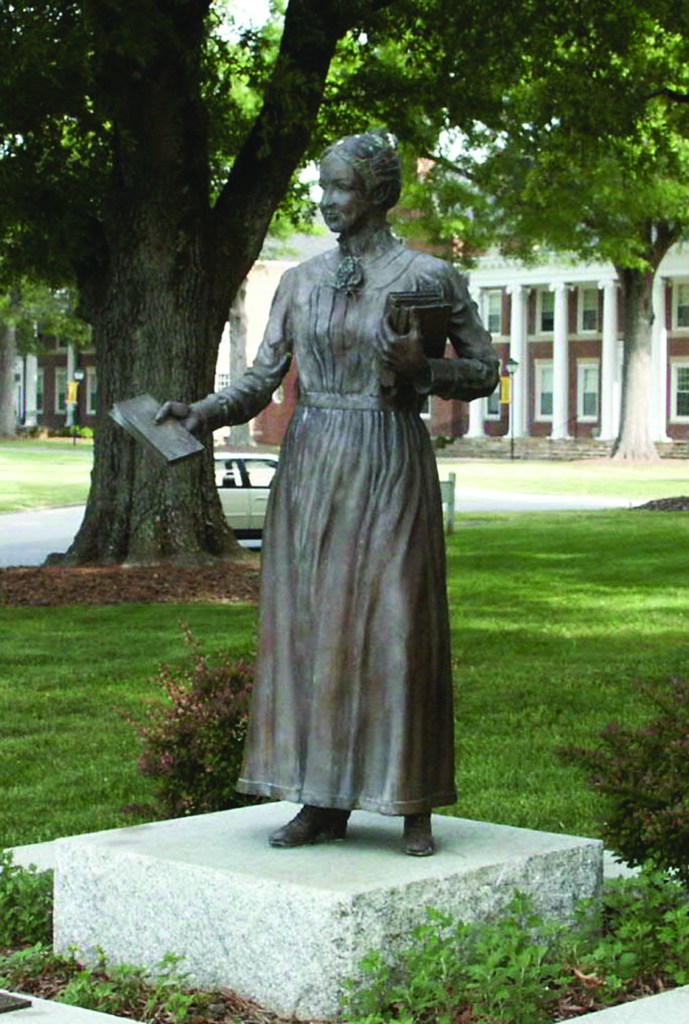 A statue is erected at Pfeiffer University of Emily Prudden, founder of the college.

Prudden operated a similar playbook each time: She would purchase property, establish a school and help run it for one to two years before selling it to a religious organization and moving on to repeat the process. Each property consisted of at least two buildings, one for the school and one where the students lived.

Her reputation steadily spread throughout the state with each new school, to the point where people often sought her out to open ones in their home counties.

“In most cases, they thrived, they did well up until when the public school system started growing in the 1920s,” Hutchinson said, at which point many began to close.

Fittingly, the only school she founded that is still in existence is Pfeiffer. She opened its forerunner, Oberlin Home and School, at the end of the 19th century on Lick Mountain in Caldwell County, though the specific date is in question. The accepted founding of the school is 1885, but Hutchinson believes Oberlin was more likely opened by Prudden in 1898.

After spending several years at the school, where she also was an instructor, Prudden turned it over to the Women’s Home Missionary Society of the Methodist Episcopal Church in 1903. The school was later renamed the Ebenezer Mitchel Home and School.

The community was already somewhat skeptical about the school since it was founded by a northerner but the fault lines began to emerge even more after one of the teachers, a woman named Pauline Abbott, did an interview with her hometown newspaper in Cincinnati in an effort to raise money.

In the article, Abbott was quoted as saying, among other things, that the people of Caldwell didn’t know who George Washington was, had never a piano and didn’t know what ice cream was. Once the story got back to the community, tensions began to flare.

“That pretty much divided the community,” Hutchinson said, noting there were people who wanted Abbott to stay and those who wanted her to leave.

Things got so bad that eventually a fight broke out, 300 shots were fired and a man died. Shortly after that, in 1907, a suspicious fire erupted and destroyed the Mitchel School. The school was rebuilt in the nearby town of Lenoir before again relocating in 1910 to its current location in Misenheimer.

The first high school diplomas were issued in 1913. Since then, the school continued to grow. It was named Pfeiffer Junior College in 1935 thanks to donations from the Pfeiffer family out of  New York City. It garnered university status in 1996.

Though she had long since been out of the picture, Prudden was dismayed at the controversy that surrounded the school during its time in Caldwell County.

Following her work at Oberlin, Prudden spent another decade opening additional schools until she retired around 1912 at the age of 80.

“She just got to the point where she couldn’t do it anymore,” Hutchinson said.

Prudden died in Hickory on Christmas 1917. A woman who helped her open numerous schools escorted her body by train back to New Haven, where she was buried.

Hutchinson said Prudden’s legacy is one of generosity and can be felt by the thousands of students who have been able to receive a quality education at Pfeiffer as a result of her efforts.

“She gave. She wanted people to have the same opportunities that she did,” he said.