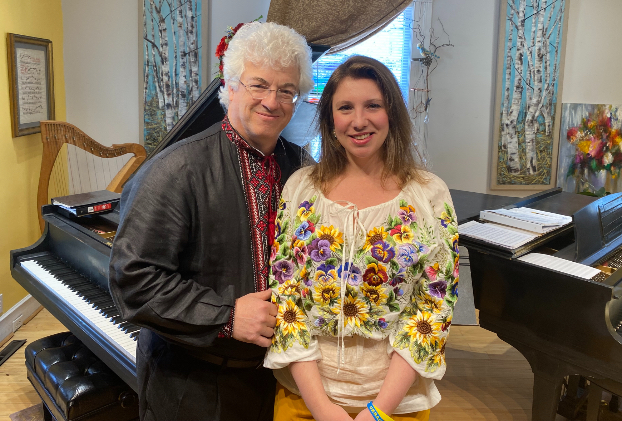 Dr. Paul Chandley and his wife Sophia Pavlenko-Chandley at their home in Troy.

Sophia Pavlenko-Chandley is a world-renown pianist and composer who has toured extensively across the globe and throughout the country.

Together with her husband, Dr. Paul Chandley, music director at First Lutheran Church in downtown Albemarle, she is an instructor at the Trinity Music Academy in Troy.

But on the night of Feb. 24, when she received word from one of her friends in the Ukrainian Army that Russia had just invaded her home country of Ukraine, her accomplishments faded away and Pavlenko-Chandley was left feeling helpless — thousands of miles away from her friends and family who were suddenly in real danger.

She had been mentally preparing for the possibility of an invasion since January, as she had been communicating with several of her friends in the military, former classmates at music school, who told her about Russian forces amassing close to 200,000 troops along the Ukrainian border for a possible attack.

Pavlenko-Chandley had also reached out to her family, including her mother, stepfather, sister and two nieces, who live in Kyiv, the capital city, about coming to the United States to visit, but they — like many Ukrainians — downplayed the likelihood of a Russian invasion.

Even though Russian President Vladimir Putin had annexed Crimea in 2014 and Moscow-backed separatists had taken control of large swaths of eastern Ukraine, many people still did not believe a large-scale invasion was imminent.

“Basically in Ukraine, nobody believed until it was too late,” Pavlenko-Chandley said. “They carried on with their life until the very day of invasion.”

Paul Chandley likened his wife to a certain American who also worked to alert people to the threat of pending war. 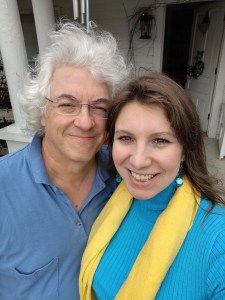 Paul Chandley and his wife Sophia at their home in Troy. Photo courtesy of Sophia Pavlenko-Chandley.

Once alerted to the reality on the ground, Pavlenko-Chandley has been trying to convince her family to leave the Ukranian capital.

“They’re in good spirits, but obviously they’re really scared,” she said. “My mom is a woman of faith.”

Some of her other family members did leave. Her 8-year-old nephew, who had been hiding for two weeks while his neighborhood in Kyiv was being bombarded, escaped and reunited with his father in Turkey.

Though safe from the violence and destruction herself, she understands that her loved ones are still in danger. A huge building across from the apartment of her childhood friend was recently demolished.

“On that first night, it was ‘Oh my God, this is really happening’ and then that shifts into a fear and then you get a stress of, you’re talking to everyone but something could happen any second, and you couldn’t do anything about it,” Chandley said.

Two days after the start of the war, in a showing of solidarity with her fellow Ukrainians, Pavlenko-Chandley joined more than 100 people across the street from the North Carolina State Capitol in Raleigh to show support for Ukraine. She led the group in song, while they all yelled chants like “freedom for Ukraine,” “Russia, hands off Ukraine” and “peace for Ukraine.”

Sending aide to people in Ukraine

While she still talks to her loved ones each day, Pavlenko-Chandley has been focused on doing everything in her power to help as many people as possible.

Pavlenko-Chandley and her husband have personally donated $30,000 to military troops including the 24th brigade and the 130th army unit and have been collecting supplies, including medical equipment and protective gear, to send to volunteers in Poland, who then make the trek into Ukraine to distribute to those in need. So far the couple have sent supplies to six regiments across the country, including those stationed in Kyiv, Odessa, Chernihiv and Mariupol. She has received several personalized videos from soldiers thanking her and Chandley for their efforts.

Her efforts have begun to attract attention across Ukraine as people continue to reach out to her seeking assistance.

“We are getting requests daily from Ukraine for needed help and we’re trying to meet everyone’s request, but it is getting harder and harder without actual funds from other generous people,” she said.

Pavlenko-Chandley is organizing a benefit concert at Montgomery Central High School on April 30, where several pianists, opera singers and others will perform. All proceeds will go to helping those in Ukraine. Roughly $6,000 has been received; her goal is to try and raise around $100,000.

It’s these small victories that provide her with the necessary fuel to keep going, despite all the stress, worry and fear that at times can completely overwhelm her.

“I feel not as helpless and I feel honored and I feel like while God is protecting my family for me, I can help my country,” she said.

And with so many other people across the United States and the world stepping up to help her home country, “it makes me feel like no man is an island,” she said. “You can actually make a difference once you make that stand.”

Despite all she has done, she would like to see the United States and NATO to do more, including establishing a “no-fly” zone throughout Ukraine and providing the country with MiG-29 fighter jets. 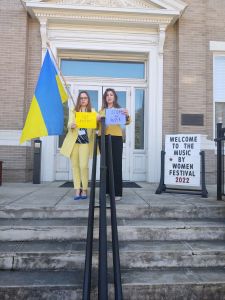 Pavlenko-Chandley has been encouraged by how people, not just in the United States but across the world, have stepped up to not just provide aide to Ukraine but to condemn the actions of Putin, who she says committed war crimes and needs to be brought to justice. The invasion has resulted in more than 4 million refugees fleeing to nearby countries such as Poland, while millions of others have been displaced within Ukraine.

“This is the type of politics which cannot be tolerated in the world,” she said. “What we are witnessing right now is the beginning of the third world war, which nobody wants to acknowledge. It’s not just some distant story, it actually concerns all of us.

“Democracy all around the world is in danger in the face of what is happening in Ukraine,” Pavlenko-Chandley added.

‘Something to be proud of’

When Russia first invaded, most experts believed Ukraine would likely fall within a few days. But more than a month into the war, most major cities are still under Ukrainian control and Russia has not been able to take control of Kyiv.

Volodymyr Zelensky, the Ukrainian president, has received global acclaim for his leadership and bravery, especially in remaining in the country, which “sends a very strong message of unity,” Pavlenko-Chandley said.

Having been a democracy since 1991, when Ukraine first gained its independence following the dissolution of the Soviet Union, Pavlenko-Chandley said people would rather die than surrender to Putin and give up their ability to live free.

“I have to admit I’m very proud of my country,” she said. “There was just this collective will of the people to survive — and that’s a sight to behold and something to be proud of.”

Anyone wanting to help can either send donations directly to Pavlenko-Chandley at 228 W. Chestnut St., Troy, or via the Venmo app at paulchandley@yahoo.com.