First straight-A student looks back at her SCC tenure

Linda Long has a unique distinction in the annals of Stanly Community College’s history: She was the first straight-A student to graduate from the school, which at the time was Stanly Technical Institution.

Having previously studied at Central Piedmont Community College while also working at various sewing mills in the county, Long decided to make a change to pursue her life’s passion: working with children. She specifically wanted to run a daycare center.

“I said there has to be something else I can do and I always loved children,” she said. “That was my thing.”

Long enrolled at STI in 1972 and was part of the first class of the college’s Early Child Specialists program. As someone who had already spent time at the collegiate level, Long, who was in her late twenties, was older than almost all of her classmates, many of whom had just graduated high school, and even some of the faculty.

As someone who graduated from Albemarle Senior High School before integration, her experience at STI was quite different as she was in school with Black students for the first time.

During her time at STI, Long was cognizant that she was part of history and that she and her fellow students were setting a course that all future generations of students would follow. At times, that realization could be pretty intimidating. 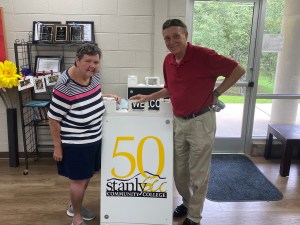 But throughout her two years, Long leaned on her strong work ethic and her genuine love for learning, she especially enjoyed writing research papers, to get her through. Long wasn’t even aware she was the first straight-A student, since grades were not something students necessarily fixated upon.

Many of her peers, she said, mistakenly believed school work was somehow easy for Long. While balancing a marriage, a son, her job at the sewing mills, and her homework, though,”it was an effort.”

But it was worth it because Long made her education a priority and she enjoyed the journey. “I love learning, I just love learning something,” she said.

And her teachers took notice. Many of them gave her harder assignments than her peers because they knew she was up to the task and could handle it. “If they had eight pages I had ten,” she recalled.

“She was the exemplary student,” long-time instructor Dan Hazlett said, noting that writing was always one of her strengths. “She was that pleasure student that you could always depend on.”

A dedicated student, Long estimates she missed one day of school during her tenure as a result of inclement weather.

In a 1974 SNAP article, which profiled Long’s academic excellence, her instructor Sandra Sebring said that “Linda gives her best to anything she does so her accomplishments have been continuous.” 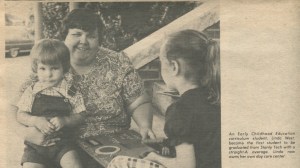 Linda Long was enrolled at STI from 1972 until her graduation in 1974. Photo courtesy of Dan Hazlett.

“The one thing that I appreciate the most about Stanly Tech, was the fact that the teachers were always willing to help,” Long said. “I don’t really remember there being any favoritism. It just seemed like we were all one.”

During her two years in the Early Child Specialists program, Long interned at several daycares in the area including Little Red Schoolhouse, Child Development Center and Kinder Kare. One of the things she enjoyed was building learning toys for the children to play with.

Long remembers building specialized toys for the children, including a “Can you find” box, which involved a sliding door filled with numerous toys. The kids, many of whom were special needs, had to open the door to locate and identify certain items. They came to love the toys and Long enjoyed watching them grow.

“I cared about the kids,” she said. “It was important to me that these kids realize their own self-worth…I wanted them to feel like they were somebody.”

After her graduation in 1974, Long worked at the Child Development Center before she eventually opened her own daycare center in New London. It lasted only few years because while Long knew she was good teacher, especially when it came to working with young children, she learned she wasn’t the best businessperson.

But the work ethic and problem-solving skills she honed while at STI stayed with her and continued to serve her well. She later worked for the international hydraulics company Aeroquip, which had a facility in Norwood. She methodically worked her way up the chain of command until after about 15 years, she was elevated to the role of supervisor for her shift, only the second female in the company to achieve the status.

She was in charge of a group of around 20 people, all of whom were men. Long was able to gain their respect, though some teased her about her background working at the daycare centers.

“I said yeah, good thing I had that experience considering the children I got here,” she teased back.

Long left Aeroquip after about 18 years and worked several other jobs before retiring about nine years ago.

Though she never had children of her own, she created a schoolroom a long time ago in her house near Stanly Academy Learning Center, complete with toys and various activities, to help care for the children of some of her family members and close friends. She did this for many years until she recently had to stop due health issues and the pandemic.

“There was somebody at my house all of the time,” she said. “I like the fact that the kids like to learn.”

And with her many interactions with people over the years, whether they classmates, children or her co-workers, Long has developed a philosophy of sorts.

“I learned a long time ago to leave people with a positive thought,” she said.