Firefighters battle the fire that broke out in a Ridgecrest home Monday. Photo courtesy of West Stanly Fire Department.

A roughly 5,000-square-foot Ridgecrest home burned to the ground Monday after firefighters from across the area battled the blaze for several hours.

Fire personnel from Ridgecrest, West Stanly, Oakboro and Endy responded to a residential structure fire at approximately 12 p.m. at the residence of Matthew and Melanie Hudson on 20037 Crest Road, according to a Facebook post from West Stanly Fire. She had called 911 and was the only person home at the time, according to Stanly County Assistant Fire Marshal Evan Faulkner.

Ridgecrest Engine 361 arrived first on scene about five minutes after the dispatch. Southside, Aquadale and Mount Pleasant fire crews also responded and Millingport was called in for additional personnel. Midland Fire and Rescue helped cover the western part of the county while the crews were busy.

The fire was in the basement and forced crews to take a defensive posture. Firefighters on the scene had to deal with several challenges including strong winds, limited resources, the speed of the fire and the lack of any nearby hydrants.

West Stanly Tower 46 was used to target hot spots that were not accessible by the crews.

It took the firefighters about two hours to get the blaze under control, Faulkner said. Fire crews remained on the premises for about five hours.

“These type of fires are extremely frustrating to our county firefighters who gave maximum effort but ultimately were able to save very little due to the conditions and complexity of the incident,” West Stanly Fire wrote on its Facebook page.

The origin and cause of the fire are being investigated by the Stanly County Fire Marshal’s Office. No injuries were reported.

Responding to the incident on Facebook, Matt Hudson wrote that after buying their home a few years ago, he received a call around noon that the dream “had turned into a nightmare.”

“You are never really prepared to lose everything you own in a matter of minutes,” he wrote. “Thank God everyone got out safe and are OK. Material things can be replaced but loved ones can’t.”

He thanked all the firefighters and first responders who arrived on the scene and “worked their butts off trying to save our home.”

One of the few items that was not completely consumed by the fire was a picture of Jesus that the family found in their son’s room.

“It is a great reminder that even in the darkest days he is there for us,” Hudson wrote. 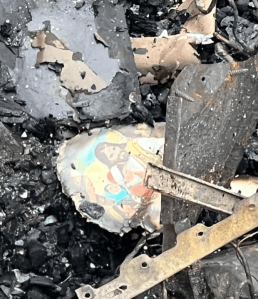 A picture of Jesus was one of the few items in the house not completely consumed from the Monday fire. Photo courtesy of Matt Hudson.

Hudson said his family and friends have been “wonderful” helping his family get set up with essentials like clothing and his church, First Baptist in Oakboro, has been scheduling meals for a few weeks until the family can move into a rental home.

“Many have asked what we need and the thing we need the most is prayers,” he said.