SPIRIT OF STANLY: Customers feel at home eating at Ly Cuisine in Albemarle 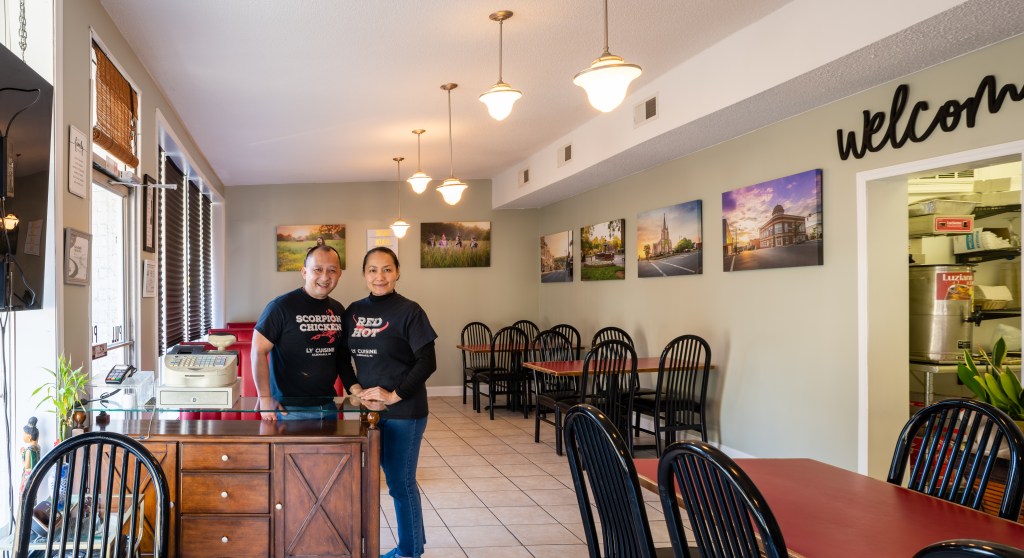 Zoua and Nhia Ly are owners of Ly Cuisine in Albemarle. (Contributed)

For close to two decades, Ly Cuisine in Albemarle has been about much more than just good food.

It’s been a place where customers turn into friends and friends into family; a place where different cultures can be shared and appreciated; and a place that’s been a mainstay in the community for so many people over the years.

“My regulars will tell you that when they come and eat at the restaurant here and when they eat my cooking, they feel that they’re at my house,” said owner Zoua Ly. “And I think, for me, that’s a big compliment.”

As someone who always enjoyed cooking, Ly decided to change career paths in the early 2000s. She had been working in the hotel industry but wanted to take a chance on herself by opening her own restaurant.

It was not an easy decision, as she had no previous professional cooking experience, but she wanted to follow her passion and introduce the community to Asian flavors, specifically Thai cuisine.

“It was very daunting,” she said. “When I came up with the idea and talked with Nhia (her husband) about it, he was kind of like, ‘Well, are you sure you want to do this?’ and I said, ‘Well, what can be so hard about it? It’s just cooking and using the skills I already have to serve the public.’ ”

After months of research and talking with around 100 people about the prospect of a Thai restaurant, she opened Ly Cuisine in January 2005 on North Second Street near the hospital. The business was located in a building owned by Ly’s father-in-law Xang Ly, who used to operate an Asian market in the space.

The restaurant was quite a groundbreaking endeavor considering there were only a handful of Asian restaurants at the time, none of which served Thai food.

Word soon spread about the opening, to the point where lines regularly were forming outside to get in.

“We were rockin’ busy,” said Nhia.

Over the years, as Ly Cuisine has grown in popularity, Ly has adapted her menu as needed to include a variety of Asian flavors and dishes, including highlighting her family’s Hmong roots. She and her husband Nhia are originally from Laos, a Southeast Asian country bordering Thailand and Vietnam.

“When we first started, it was strictly a Thai restaurant, but through the years, as we advanced in our knowledge of running a restaurant, we mixed it together — it’s more Asian fusion you can say right now,” Nhia said.

Though the menu is quite extensive, some of the restaurant’s most popular dishes include classics such as pad thai, curry noodle and spring rolls along with others like scorpion chicken and thai style steak, which is only offered Friday and Saturday.

“We’ve had customers tell us that we have one of the best steaks hands down compared to other expensive steak restaurants,” Ly said.

As Ly’s gotten to know many of her stalwart customers — some of whom stop by at least once a week — she’s learned to customize dishes to their liking. Several items on the menu — such as Cody’s Chicken, which is sliced chicken sautéed in oyster and teriyaki sauce — are named for customers who first suggested the idea.

“I’m in the business of relationships and it’s relationships through my cooking,” Ly said. “Through the years, I’ve gotten to know my customers and I’ve received feedback from them and what they would like. A lot of my cooking styles and dishes are really influenced by my customers.”

One of Ly Cuisine’s more high-profile customers over the years has been Kellie Pickler, who regularly frequented the restaurant before finding success on “American Idol.” Even after she became famous, Pickler would call ahead to schedule private dinners whenever she was in town. To this day, Picker occasionally messages the family on Facebook, Ly said, “just to see how we’re doing.”

The restaurant has gained a reputation for authentic Asian cuisine that extends beyond the borders of Stanly County. People from all across the country, including Ly’s relatives in California and parts of the Midwest, have come to enjoy the flavors offered up by Ly and her staff.

“We’re a small restaurant in a small town yet someone from California or New York knows about us,” Ly said. “It’s pretty amazing.”

In cultivating relationships with so many customers, many of whom Ly now refers to as her “family,” several striking moments come to mind. Ly remembers speaking with an elderly woman who had avoided ethnic cuisine for most of her life before her daughter convinced her to eat at Ly Cuisine.

“She said, ‘Zoua, I’m so glad that my daughter encouraged me to try your food. Because had my daughter not, I would never know what I had been missing all these years,” Ly recalled.

After the woman, who became a regular patron, passed away, her daughter told Ly what the restaurant had meant to her mother.

“Thank you for cooking for my parents,” Ly said the daughter told her. “You don’t know the joy that you gave them.”

It’s those kind of special, intimate moments that Ly says she treasures the most.

“When customers tell me that, that’s my legacy. I’m grateful for that.”