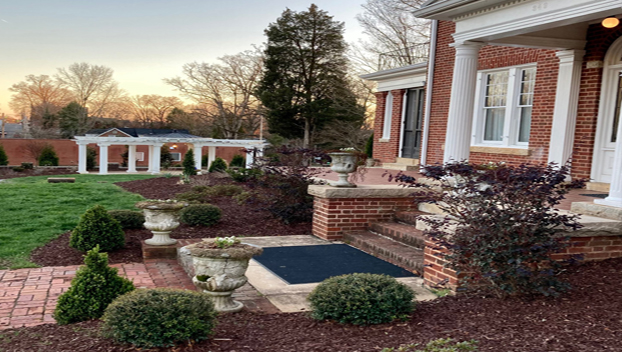 Site No. 7 is the formal garden of the Dr. Julius Clegg Hall House at 343 N. Second St., Albemarle. In 2017 David Scarboro and his late wife, Brenda, purchased the historic home and began the restoration of both house and gardens. (Contributed)

Across Stanly County the arrival of spring brings an explosion of floral landscapes and the return of outdoor living. To celebrate the beauty and rich history of Albemarle and Stanly County, The Stanly County Historical Society will host a benefit Courtyard & Garden Tour 10 a.m.-4 p.m. April 30.

Proceeds from this rain or shine event will fund educational programs and preservation initiatives of the Stanly County Historical Society, a 501(c)3 nonprofit organization. This self-guided tour will allow access to 10 private and public courtyard and garden spaces stretching from Albemarle to Richfield that will inspire gardeners of all levels. The tour features a variety of garden spaces including DIY landscapes, restored formal gardens and centuries old family farms.

Site No. 7 is the formal garden of the Dr. Julius Clegg Hall House at 343 N. Second St., Albemarle. In 2017 David Scarboro and his late wife, Brenda, purchased the historic home and began the restoration of both house and gardens.

Although many of the original plantings had been lost to time and neglect, Scarboro, along with the help of local artist John Williams, restored the gardens based on the original landscape plan. Most of the hardscape survived and has been restored, including the well known pergola.

The pergola was designed as an outside tea room for Dr. Hall’s wife Mary. Later, this is where their daughter Evelyn, a self-proclaimed mystic, taught spiritualism and metaphysics. She also held lectures, including one called “The Many Facets of Healing” where she taught people how to heal themselves with color, music, mind over matter and meditation.

The sunken garden is now called The Secret Garden after one of Brenda’s favorite books. The restoration of the garden was started over three years ago by Bushwackers Landscaping. It will continue to grow and change as the years follow. A missing rose arbor will be rebuilt in the spring along with the addition of perennials and other plants. A dedication of the garden will be held in memory of Brenda Scarboro during the Courtyard and Garden Tour.

Leave the manicured lawns of the city for the rolling hills and lush farm lands of the northern area of Stanly County. Site No. 8 is the home of Tim and Deborah Burris at 24114 Collie Road, Gold Hill, and lies just up the road from the 1898 Mattons Grove United Methodist Church. 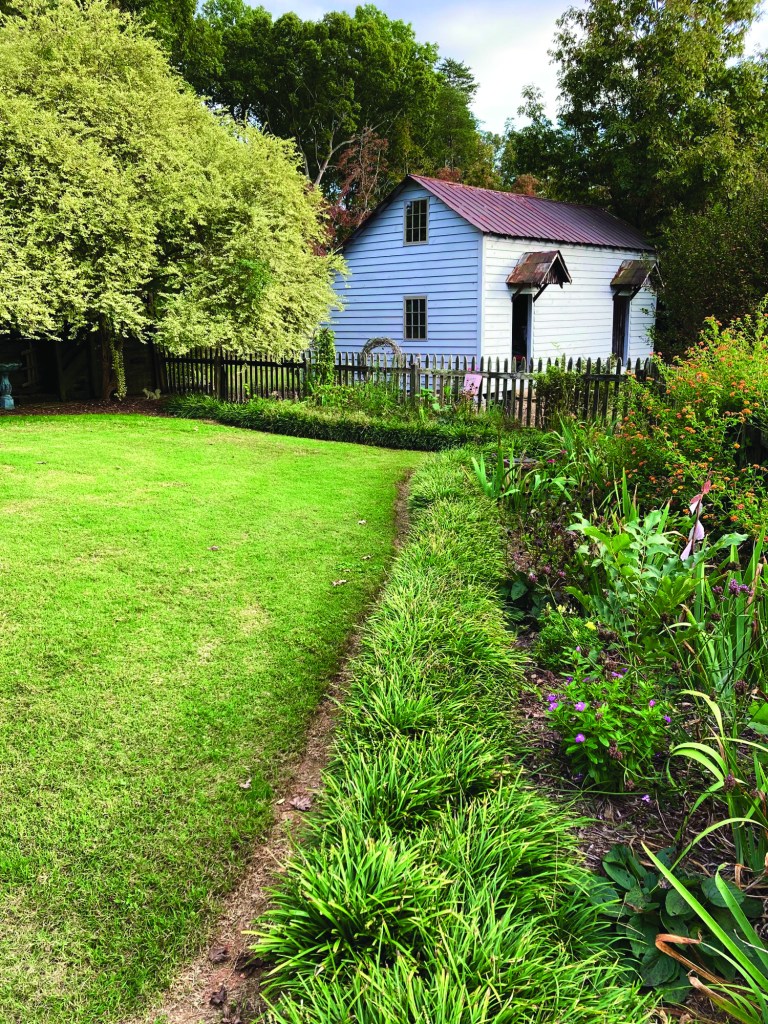 Tim and Deborah purchased the abandoned property in 1981. Their first task was to make the 1910 property habitable. This was followed by years of improvements to meet the needs of a growing family.

Tim and Deborah have retained much of the original character of the house and grounds while completing a deck, brick paver patio, raised bed kitchen garden and a larger garden and many other landscaping changes. Most recently they have begun projects to restore each of the outbuildings.

Their children have enjoyed growing up there with nature. Deer, wild turkey, blue herons, red and gray fox and a variety of song birds have shared the property. They have particularly enjoyed the countless clear night skies, sunrises and sunsets. On the eastern edge of the property beside the raised kitchen garden is a large evergreen. They called it the “elf” tree and spun the story that at Christmas the elves would come out of the woods one night and decorate it for Christmas. This was part of the childhood magic of the property. To continue the stories and magic of this property, there are little fairy homes here and there.

Tim and Deborah have carried on the traditions begun in the early 1900s by the Collie Barringer family by having large gatherings of family and friends spilling out over the property for picnics, oyster roasts and barbecues. They have also hosted the regional riding clubs who sponsor wagon trains and horse-back riding outings. Most meaningful of all events, this was the site of their daughter’s 2014 wedding against the backdrop of the rustic barn.

Advance $15 wristband tickets are available at the Stanly County History Center, 157 N. Second St., Albemarle, or by mail order to Stanly County Historical Society, PO Box 1384, Albemarle, NC 28002. Pre-paid mail orders will be held at the will call station at the 1852 Isaiah Snuggs House, 112 N. Third St, Albemarle, from 9:30 a.m.-2 p.m. Wristband tickets will be $20 purchased on the day of the tour at the Isaiah Snuggs House. All ticket sales are non-refundable donations. Direct inquiries to Stanlycountyhistory@gmail.com or call 704-986-3777.