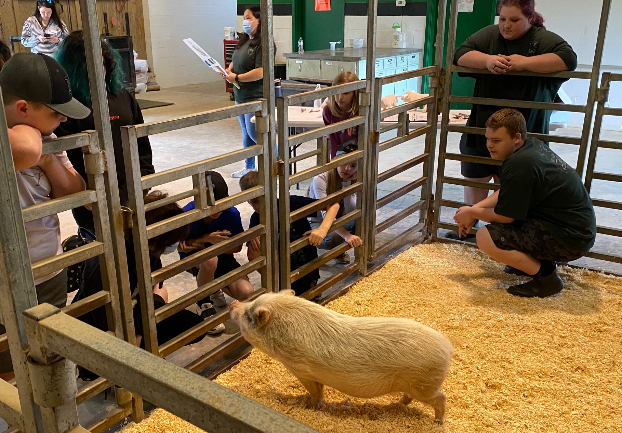 The elementary students were divided into small groups and rotated through 11 stations, which were located around the school’s barn and greenhouse. Each of the stations featured different aspects of agriculture including forestry, natural resources, soil, agribusiness, cattle, equine, farm equipment, bees, swine, goats/sheep and small animals (bearded dragons and a bird). 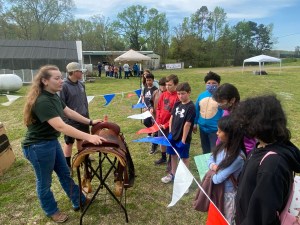 Anna Aikman explains to students the various parts of a saddle.

The event, which was first held in 2019, was canceled the past two years due to the COVID-19 pandemic. Opening it back up this year created heightened excitement among many of the high school students leading the event, many of whom were participating for the first time.

“It’s very different than how it was my freshman year,” said senior Brooklyn Edwards, president of the school’s FFA chapter and the only student who also helped with Ag Day in 2019. “I actually got to teach everybody what they needed to do and how everything had to be run.”

West Stanly’s FFA group is comprised of about 110 students, though only about 30 are active members. FFA stands for Future Farmers of America, which was the group’s original name until it was changed to National FAA Organization in 1988.

The fifth grade students learned about the body parts of various animals and the differences between cattle breeds, such as beef and dairy cows. The animals included in the event consisted of several goats and sheep, including a 1-day-old lamb, Brahman and Simmental cattle, two bearded dragons, a bird, a miniature donkey and the school’s pig, Daisy.

Students also learned why soil is critical to the planet, the important role trees play in the environment and toured the school’s greenhouse. 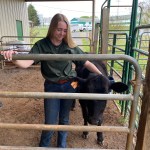 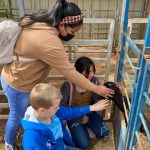 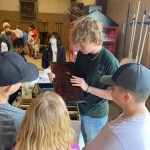 “Everybody needs to know about agriculture and so being able to showcase this just gives us that opportunity and I couldn’t do it without my students,” said Natalee Rogers, agriculture teacher and FFA adviser.

By reaching out and fostering connections with children at such a young age, the goal is that hopefully some of them will decide to explore agriculture and get involved with FFA as they get older.

“I hope that these elementary students can see that leadership (of the high school students) so that one day when they get to the middle school and high school programs, they can take part in FFA and this event,” she said.

“The overall goal is to make the students aware of agriculture and the different opportunities within the industry that they can potentially pursue a career in,” Rogers added.

Anna Cooper, a freshman taking part in her first Ag Day, who helped lead a group of Endy students, was encouraged by how much interest the elementary students showed as they rotated between stations, especially when it came to interacting with the animals.

“It’s a lot better than I thought it would be,” she said, “because I didn’t think the kids would be as excited as they were.”

And one day in the near future, those same wide-eyed students could become the next FFA leaders at the school.

“Fifth graders getting to come here, they have something to look forward to once they get to high school,” she said.