Albemarle Police responded Thursday afternoon to a call at a home in the 2000 block of Monza Drive. 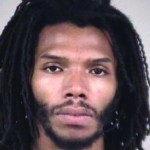 A man inside the home was found unresponsive with multiple gunshot wounds. Stanly County EMS arrived on the scene and the victim was pronounced dead on scene. The deceased has been identified as 33-year-old Benjamin David Plyler.
APD detectives, along with assistance from the North Carolina State Bureau of Investigation and the Union County Sheriff’s Office, conducted an investigation that led to the arrest of 32-year-old Quinton Darby Harris in Union County.