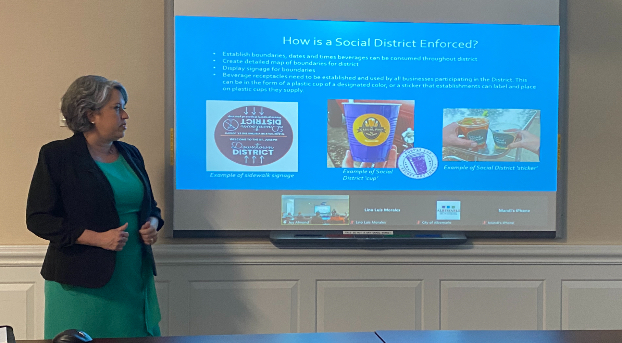 Joy Almond talks about what residents can expect regarding the city's proposed social district.

In order to increase foot traffic and help revitalize the downtown, Albemarle is looking into creating a social district which would allow people to walk around and consume alcoholic beverages in designated outdoor areas.

Following an initial presentation before city council in February, two public input sessions were conducted Monday at City Hall to garner feedback from the community.

Main Street Manager/Albemarle Downtown Development Corporation Director Joy Almond, who organized the input sessions, said establishing such a district would attract new visitors, enhance the activity in outdoor spaces and give restaurants and bars more space for patrons to congregate.

Patrons would not be able to carry their open containers outside the district or take a beverage from one establishment into another. They also could not bring their own personal beer or wine into the district. Certain businesses within the district can decide to not participate.

There are several requirements from the state, including a map outlining the district, days and hours for alcohol consumption throughout the district, signage indicating the location and a management and maintenance plan.

The districts are also required to provide to-go containers for alcoholic drinks that have some sort of marking indicating the drink must stay within the parameters of the district. The cups can contain no more than 16 ounces.

Downtown Albemarle’s district would encompass about eight blocks, running from Main Street to Pee Dee Avenue near Five Points and including major portions of North and South streets, according to a color-coded draft map of the district. Public areas like City Hall and the courthouse along with churches would be excluded.

“We tried to keep this as broad as possible for the time being, it is a rough draft,” Planning Director Kevin Robinson said about the map. A more detailed map will be created once more information is gathered. 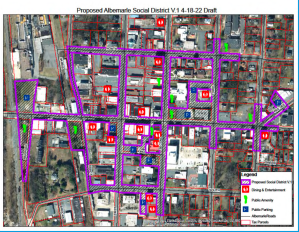 Several local municipalities, including Kannapolis and Hickory, have already implemented social districts, while Norwood received approval from the town council in December. Salisbury has also been looking into creating one.

Almond said she has spoken with several downtown business about creating a social district and none have offered any pushbacks.

“Everyone seems to feel that this would be something that would benefit their businesses and bring foot traffic to the area,” she said.

Colton Baker, who is opening Uwharrie Brewing at the former fire station behind City Hall, was excited that such a district would help the downtown continue to grow and attract new visitors.

“I think this will definitely drive foot traffic downtown, which is a huge thing for us. I think foot traffic is the thing lacking most in downtown,” he said.

As someone who lived in the Asheville area, Baker said he’s very familiar with Hickory and noted its downtown seems to have really flourished since the social district was created.

Kent Harkey, president of the Stanly County Historical Society, said the social district would likely be a key boon for the Society, especially when hosting events such as music concerts at the historic Isaiah Snuggs House and the Freeman-Marks House.

“Personally, I could see it as a benefit with having Uwharrie Brewing across the street from our porch concerts,” he said. “It would be a great evening for someone to be able to bring a container from the brewery to the historic houses for a concert.”

Lee Allen, broker and owner of Re/Max Town and Country who manages several properties in the downtown area, was in support of creating a district, saying it would make it easier for prospective customers to want to come to the area to do business.

By opening up the downtown, “you will get some friends and neighbors who are strangers now but they’ll be neighbors once they start a business,” Allen said.

A few people were concerned about why a district was needed in the first place, since people can already enjoy alcoholic beverages in the certain spaces directly outside restaurants.

“If you can already serve it on the sidewalk in front of the restaurant and you can’t take your drink into another restaurant, what do you gain?” Chris Bramlett asked. He was also concerned about how the police would monitor the increased activity.

Responding to Bramlett’s concern, Assistant Police Chief J.T. Cranford mentioned the department is researching what would be needed if the city were to approve of the social district along with what other departments have been doing.

“This is something we would be looking at enforcement on,” he said.

Dr. Rufus Lefler wanted to see data from other municipalities who have implemented districts to see how their downtowns have benefited.

“It’s great if it’s really what we need, but from what’s been presented, I can’t see any outstanding benefit that we’re going to get from it,” he said.

Others were concerned that a social district could lead to people overindulging and drinking and driving. One woman worried about the negative impacts the district could have on young children in the area.

“Let me make this clear: I do not want to see Bourbon Street in our downtown,” Almond said. “That is not at all what we want.”

Many people suggested limiting the days and hours people could walk around with alcohol, at least when first implementing the district.

In a short interview after the first session, Almond said she hoped a social district would encourage people to become more responsible drivers and could also lead to an increase in Uber and Lyft drivers in the area.

Once she collects the feedback from the community, Almond will present an ordinance draft before council for approval in May. If approved, the city would then need to apply for a Social District Registration with the state’s ABC Commission. Almond hopes to have a social district operational by September.