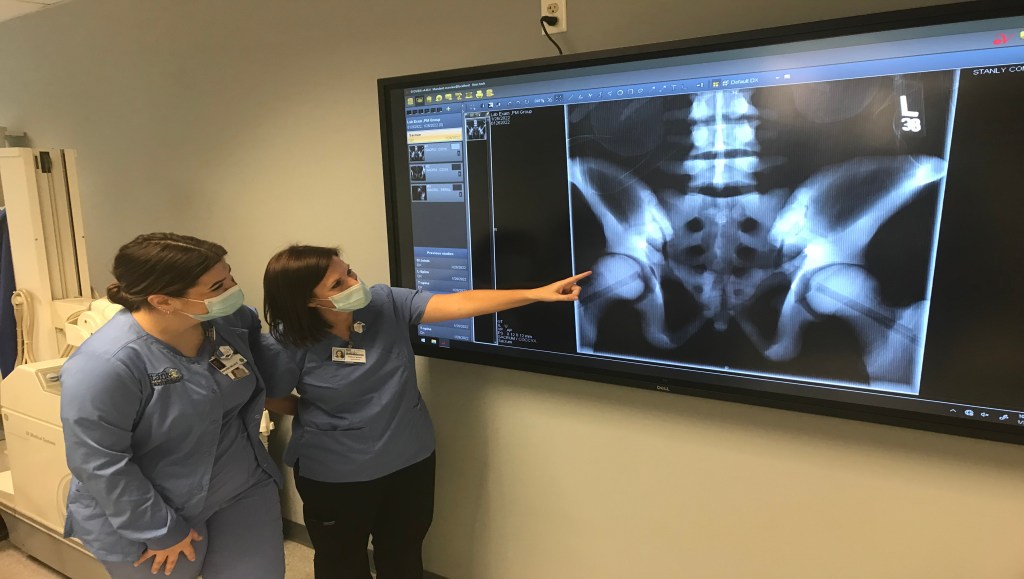 Maurin Wilhite, left, and Tiffany Barbee evaluate an X-ray on a Smart Board. (Photo by TOBY THORPE)

Students in the Stanly Community College radiography program, one of a number of the school’s health science program options, should be prepared for extensive classroom, lab and clinical training while in pursuit of a degree.

“You’ve got to be dedicated,” said Tameka Purdie, a second-semester student in the program, when asked her impressions of her chosen field of study.

“Radiography is the study of the use of radiation to produce images of the human body,” said Tiffany Barbee, director of the program, when asked to contrast radiography from radiology. “The terms are often used interchangeably.”

Barbee, who has worked with the program at SCC for the past 11 years, had previously served as a mammography technologist at Charlotte Radiology.

Accepting the position at SCC was a bit of a homecoming, however.

“I’m a graduate of this program myself,” she said, adding that the program was already “well-established” even when she was a student. 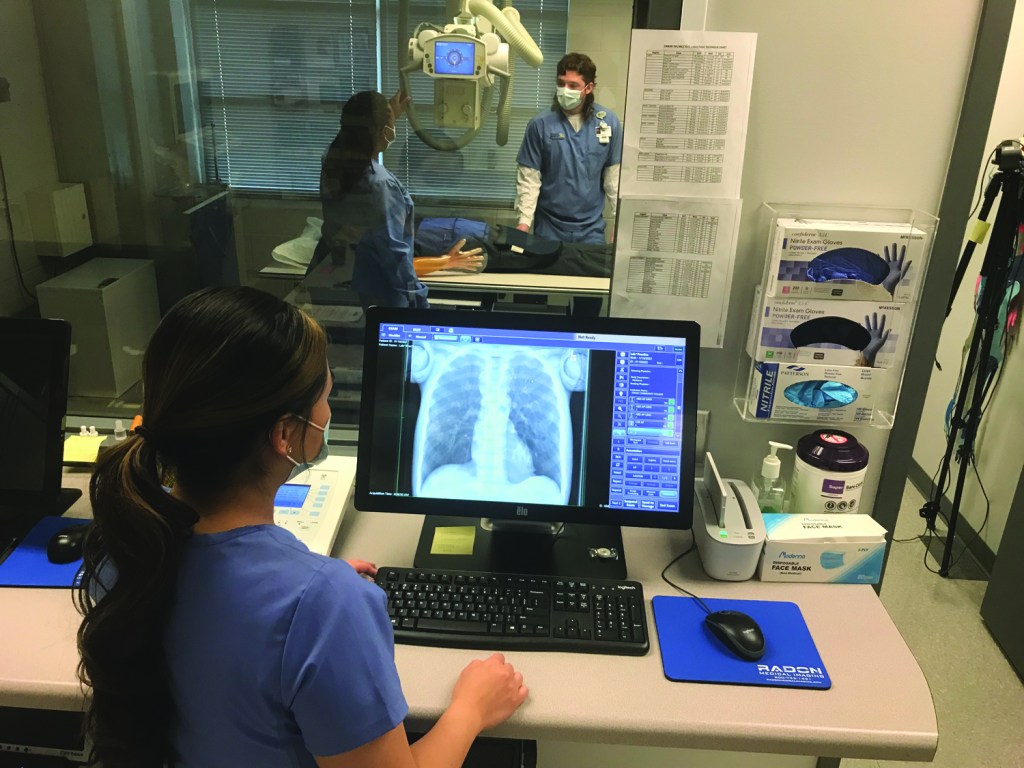 Jenny Hua, front, evaluates a chest X-ray. Tameka Purdie, left, and Ryan Hummer, are in the background with the patient. (Photo by TOBY THORPE)

During her tenure as director, the program has achieved a number of milestones, Barbee said.

“The program is now accredited through JRCERT, the Joint Review Committee on Education in Radiologic Technology,” she said. “The accreditation certifies that our program meets standards of instruction for such programs.”

Another achievement of note is the update of the program’s lab facilities at the SCC Crutchfield Campus in Locust.

“We now have energized equipment,” said Barbee, “so we are able to produce actual X-rays, which makes our training much more effective.”

With live X-rays being produced, the dangers of radiation exposure must be mitigated for students and instructors, and Barbee noted that all necessary precautions are followed.

“The lab walls are lined with lead inside the sheetrock,” she said. “In addition, our students and instructors are required to wear shields, also made of lead, during procedures, and as a final safeguard, each student and instructor is required to wear a special badge that measures and displays the amount of radiation exposure they have received.” 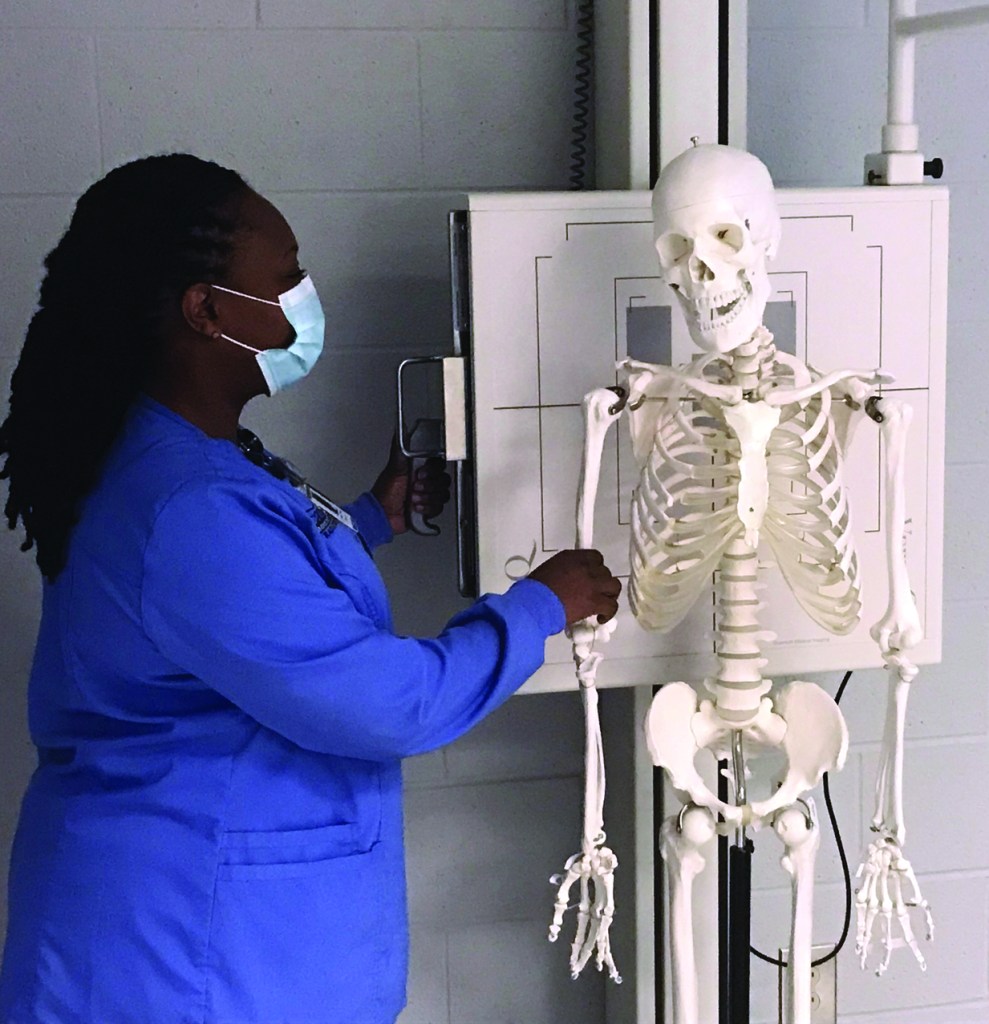 Tameka Purdie lines up a “patient” for an X-ray. (Photo by TOBY THORPE)

The program draws students from a wide geographical area, according to Barbee.

“With our location being as it is, we draw students not just from Stanly, but from almost all our bordering counties as well,” she said.

Barbee added that jobs are “immediately available” to program graduates.

“Many of our grads move right into careers in hospitals, doctors’ offices and labs, and some continue into specialized fields, such as CT or MRI,” she said. “Other students transfer on to colleges and universities and pursue four-year degrees in management.”

In addition, many graduates go on to take the certification exam offered by the American Registry of Radiologic Technologists.

Students in the radiography curriculum cite various reasons as to why they have chosen to pursue careers in the field.

Ryan Hummer, a second-semester student, has lifelong connections to radiography.

“My family is involved in the medical field, and my brother is also a radiographer,” he said.

Maurin Wilhite, another second-semester student, became interested in the field as a fan of the TV show “Bones.”

“It seemed they were always using X-rays,” she noted.

Acceptance into the program is “highly competitive,” said Barbee.

“Last year, we had between 80 and 90 applications,” she said, “and we accept 20 students into the program each year.”

According to Barbee, admission into the program is based upon high school grades, with special emphasis on biology, chemistry and math.

An additional factor in determining acceptance into the program is performance on a required test, the Test of Essential Academic Skills (TEAS), which evaluates a student’s readiness for college programs in the health sciences.

“Some students will work one to two years to prepare for admission into the program,” Barbee said, which usually involves general education classes and test preparation.

“It’s a heavy workload for students who take both general ed courses and radiography at the same time,” she added, while noting that some school systems enable students to take some of the required general education courses while still in high school.

The curriculum, which is five semesters in length, involves lab practice and clinical rotations in addition to classroom lectures.

“Students are in classes and labs three to four days a week,” said Barbee. “In addition they are scheduled for clinical work under supervision of an RT (radiologic technician), in which they work with patients in performing actual X-rays.”

The clinical element of the program is made possible through partnerships with hospitals, urgent care facilities and physicians in Stanly, Anson, Cabarrus, Mecklenburg, Montgomery and Union counties, Barbee said.

The program and its graduates have a bright future, says Barbee.

“There will always be a demand for workers in this field,” she said.