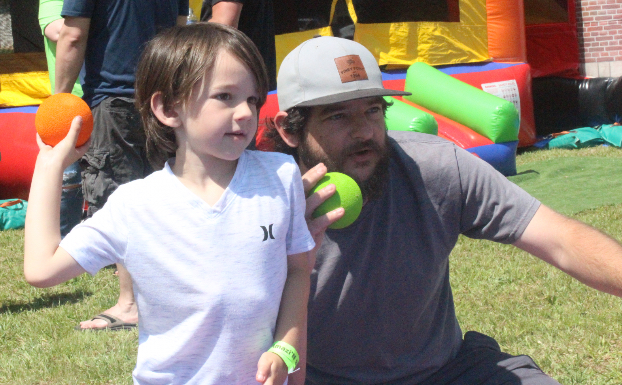 Jeff Poteat and his son Evan enjoy one of the many games during Norwood's Arbor Day Festival.

The crowds across Norwood Saturday were pulsating with an electric energy as they ate food, enjoyed live entertainment and reveled in the fact that after years of being apart due to the COVID-19 pandemic, they were able to join together in celebration for the 27th Arbor Day Festival.

This was the first time the town has hosted the event, which attracts several thousands of people each year, since 2019. The wait had been a long time coming for so many people.

“It took Covid to realize how special some of things are that you took for granted,” said lifelong resident Walter Davis.

A noted tree enthusiast, Davis, 83, planted a giant redwood at the Darrell Almond Community Park for the festival and was helping to give away 150 trees — silver maple, dogwood and red oak — that the town had purchased.

“Traditionally, it’s been an Arbor Day celebration in name only, but this year we’re turning it around and we’re making it part of what we’re really trying to do, which is to help the planet by planting trees,” Davis said. 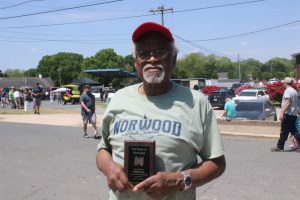 From fishing at the park to axe throwing in the space behind Reservoir Coffee to helicopter rides behind Norwood Elementary, the festival stretched across most of the town.

There were at least 80 vendors, including food trucks specializing in all types of cuisine, from Carribean fusion to chicken and sandwiches to ice cream and cupcakes, along with a variety of inflatables for children.

“Norwood needs more restaurants so I feel like it’s always good to see different types of food,” said Norwood resident Jeff Poteat, who was at the celebration with his wife and 5-year-old son Evan.

There were also musicians who performed throughout the day, including Ellie Morgan, Lucas James, the Blackwater Band and the Tonez. The event concluded at 10 p.m. with a fireworks display.

The overriding feeling among the many people in attendance seemed to be joy — not just at being part of such a large-scale event but being able to interact with so many people. People also enjoyed walking around with alcoholic beverages in certain areas, as the town’s new social district was operational.

“It’s freeing” being out here, said Mandy Hurley, who was at the event with her wife and twin 3-year-old daughters Huxley and Sawyer. “To be able to go out and be in the community and talk with everybody and congregate and shake hands, it’s been great.” 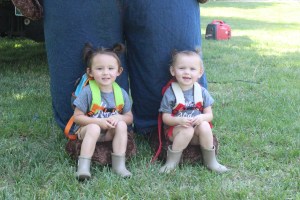 Three-year-old twins Huxley and Sawyer Hurley sit at the foot of a large Smokey the Bear.

“We’ve been shut down for what seems like forever and just to have people come together and have a good time is really special,” Norwood Police Chief James Wilson said. “We’ve heard so many good compliments today so far and everybody is really enjoying themselves.”

Close to 100 vintage cars were displayed at Norwood Municipal Park as part of the annual car show hosted by VFW Post 6183 — it’s biggest yearly fundraiser. For many of the owners, it was a a long-awaited reunion to be able to talk with other like-minded vintage car enthusiasts.

“Some of them told me this morning that the only time they see these people in this particular car show is when they come here,” said Steve Culp, a member of the Post 6183 who helped organize the show. “They take that time to catch up.” 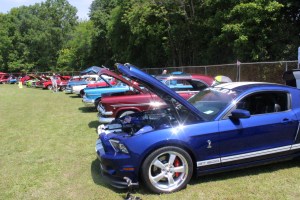 All kinds of vintage cars were on display Saturday as part of the Arbor Day car show.

Arbor Day also represents a passing of the torch moment for many parents who grew up coming to the festival and now enjoy watching their children take in the experience.

“I came up every year as a kid,” said Norwood resident Bernard Henry, who enjoyed watching his two sons, Caleb and Ari, draw with chalk on the sidewalk of Town Hall in an area labeled Graffiti Island.

“It’s very important for them to come here because they get to see some of the stuff that we used to do back in the day,” he added.

While it can be hard to bring people together for a common purpose nowadays, “when you do it, look how beautiful it is,” Henry said. “It’s very beautiful.”

Norwood Town Administrator Scott Howard is happy with the outcome, noting there was an estimated attendance of 4,500.

“It was a great team effort, with the Norwood Central Business District Group, our great employees and Norwood Council allowing me the freedom to put in the time and resources to make this a festival in which all of Norwood can be proud,” Howard said. 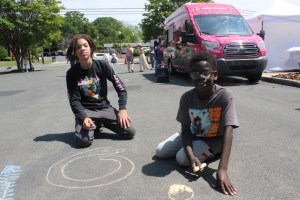 Ari Peterson and Caleb Henry enjoy drawing on the sidewalk in the area known as Graffiti Island.