United Way secured roughly $336,000 for local nonprofits as part of its giving campaign

As part of its 2021 giving campaign, which began in the fall and concluded in late January, the United Way of Stanly County raised approximately $260,000 for local nonprofit organizations and secured an additional $76,000 from FEMA and the American Rescue Plan Act.

“We’re so thankful for every dollar from every donor. Whether that’s a corporate donor, or an individual donor or a family or a foundation, every dollar counts when we’re trying to fund the nonprofits here,” Executive Director Kelly Misiak said as she recently revealed campaign totals.

Misiak was recently named executive director after serving many months as interim director following Salem Taylor’s resignation last year. Before coming to the United Way in 2019, Misiak served for five years as the director of servant leadership at Pfeiffer University, where she was awarded the North Carolina Civic Engagement Professional of the Year by Campus Compact in 2016 and the Starnes Award for Excellence in 2018.

About the grant recipients

Misiak spent the past several weeks meeting with each of the recipients that received grants, which ranged in amounts from $1,000 to roughly 20,000, depending on factors such as community need and project impact.

“While our community recovers from the economic impact of the pandemic, these are programs that will keep families in their homes, keep their lights on and ensure that they have access to affordable medical care and childcare services,” Misiak said.

Stanly County Rescue received $16,500, which will be dispersed in monthly installments, to help reimburse the unit for the Jaws of Life tool it recently purchased. The new tool will facilitate quicker response times when it comes to collisions, which will help save more lives.

“This will allow us to come straight off the truck and grab this tool, which is all electric, and it allows us to have a quicker response for the patient and get them out of the car,” said director Chad Allen. 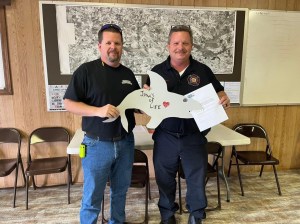 Esther House received $10,000 and the funds will go directly to its mortgage, thus helping alleviate stress from the organization’s staff and board of directors, said director Sabrina Cline.

“We are forever grateful for United Way of Stanly County and the hard work they do in the community,” Cline said.

Hospice of Stanly received about $11,500 in funding, which will go to its bereavement program which supports those who are grieving loved ones, said Lori Thayer Howard, the organization’s executive director.

“The grant from the United Way is so important because this program is offered as a free service to our community,” she said. “The United Way funding is used for support groups, Camp Forget-Me-Not for grieving children and their families, the Hope Blooms grief path, the summer grief series, educational materials and much more.”

The $76,000 attained through the FEMA grant has been awarded to Stanly Community Christian Ministry and Homes of Hope for direct emergency housing, utility assistance and food for local families.

United Way typically receives around $16,000 to $20,000 from FEMA but it increased this year due to increased federal funding.

United Way is in the process of transitioning to a year-round fundraising model, as opposed to its typical fall campaign, so it can respond to immediate and emergency community needs when they arise.

While the organization was able to help every recipient that applied for assistance, it was not able to fulfill every specific grant request. Looking ahead to next year, Misiak said the organization’s goal will be to try and fulfill each nonprofit’s financial request.

“I’ll work as hard as I can to do that, but we also need the community’s help to do that,” she said.