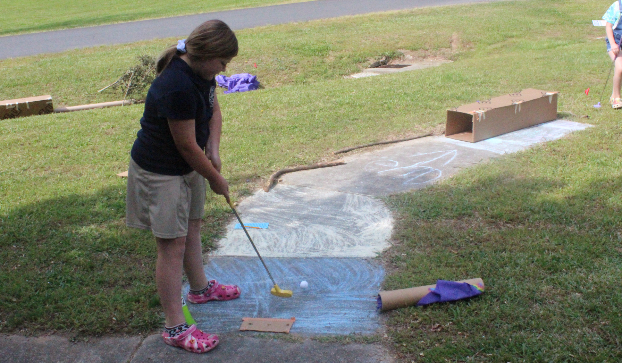 Fourth grader Anslee Yow putts on one of the mini-golf courses designed by the school's fourth grade students.

Working in groups of two, students created their own individualized holes, often having to change plans on the fly when their initial ideas didn’t work out. But the troubleshooting is part of the process — not just for designing the mini-golf course, but for all of the STEM-based projects students work on while at Oakboro.

“Learning to persevere and get through an initial stop or a stumbling block, I think that’s one of the best things overall that you take away from this kind of environment,” fourth-grade teacher Jeremy Efird said.

From building a sustainable greenhouse, to learning how to code and working with virtual reality technology, students at Oakboro are regularly introduced to challenging hands-on projects and environments.

As Stanly County Schools only STEM school, Oakboro was recognized last fall by the NC State Board of Education as an official NC STEM School of Distinction, a high honor as only about 10 percent of STEM schools in the state have achieved such a distinction.

To celebrate STEM and the school becoming a School of Distinction, the school held its first STEMfest event April 30 on the front lawn. In addition to showcasing students’ projects, including the mini-golf course, the celebration also included a dunk tank, giant bounce house, food trucks and a yard and craft show. 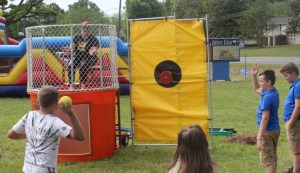 “At its core, STEMfest is a celebration of STEM and our community,” STEM Coach Jennifer Crawford said. “We would never have achieved NC STEM School of Distinction without the community’s support and the dedication of our staff and scholars. This STEMfest is not only special because it is our first, it is our launch and celebration of getting back to the hands-on, collaborative learning that makes us who we are.”

First grade students have also been learning about forces of motion and they designed individualized carnival games, including Skee-Ball and tic-tac-toe, for people to enjoy. The students also had to type directions for each game.

“The kids learned all about pushes, pulls and how those things change direction with the speed of objects and so they had to go home and create carnival games and bring them out here,” first grade teacher Chelsea Williams said. “They’ve really done a good job.”

When asked what she loved most about being a STEM student, fourth grader Georgia Roberson mentioned all the opportunities offered at Oakboro.

“You get to do more than you would usually do at a regular school,” she said. “You get to create stuff.”

Roberson said she and her classmates are building an underwater remote operated vehicle.

Sixth-grade student Emma Kimbrough enrolled in Oakboro at the beginning of the year after her family moved to the area from Houston, Texas. She struggled at her old school, but has really flourished while at Oakboro.

“What appealed to me was the fact that Oakboro concentrated on STEM and it was a small neighborhood school,” her mother Allison Toepperwein said. “It had that small town feeling and I really wanted that.”