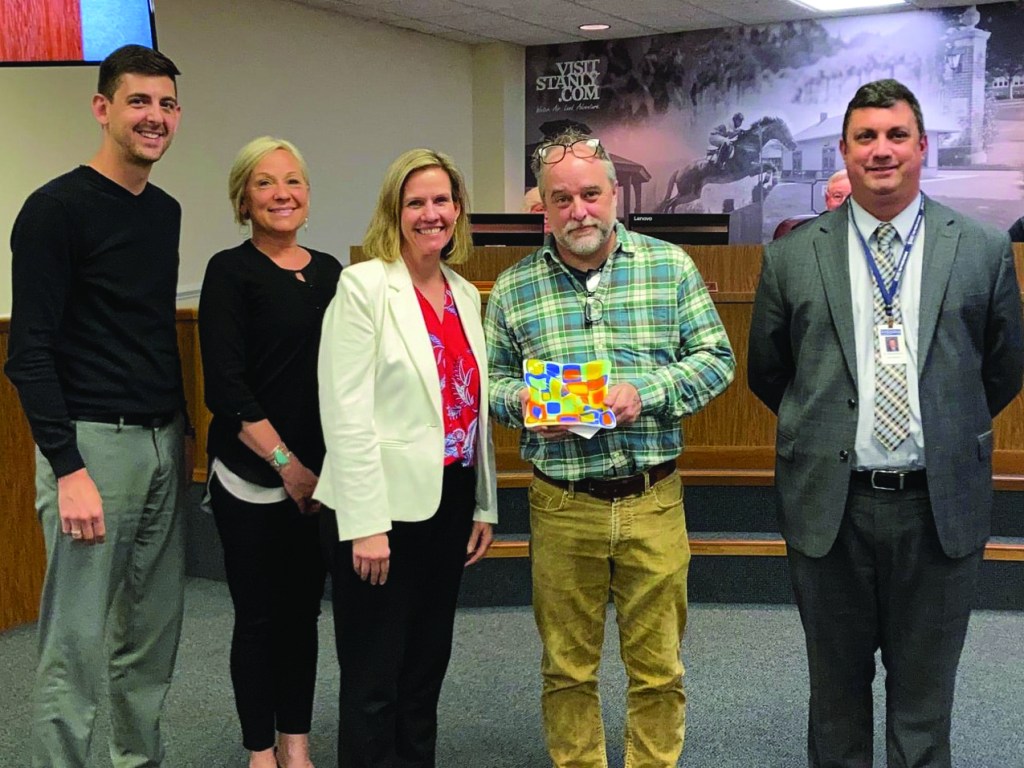 Since 2014, the Stanly County Arts Council has recognized a Fine Arts Educator of the Year, affectionately known as the “Jim Kennedy” award in memory of long-time arts advocate, teacher and coach, James D. Kennedy.

The award recognizes a fine arts teacher in the Stanly County public school system who has made a significant positive impact on the arts in education and has inspired students to pursue, appreciate, and respect the fine arts. Nominations are submitted by principals from the elementary, middle and high schools in Stanly County.

Fike received his award at the April Board of Education meeting. Fike also received a $250 classroom scholarship to help him continue his successful arts program at West.

He will also be publicly recognized for this honor at the Charlotte Symphony Orchestra concert at 3 p.m. Oct. 23.

“Mr. Fike is an advocate for all of the arts. He enjoys working with students on all levels,” West Stanly principal Anne McLendon wrote in her nomination. “Mr. Fike uses his AP students as leaders in the classroom as they will teach and model different art techniques. He displays student artwork all over the school campus. He serves on the school leadership team, chairs the climate committee and serves on Senior Advisory. His leadership in the arts is well known throughout our school and the county.”

After graduating with a master’s degree from Marshall University, Fike began teaching at Albemarle High School.

Certified in math, social studies and art, he taught math for 10 years before switching to social studies in 2004. He spent 19 years at Albemarle High, being named the school’s Teacher of the Year in 2010.

In 2013, he moved to North Stanly High School to teach its Advanced Placement History classes, being named the school’s Co-Teacher of the Year in 2017.

After four years, he moved to West Stanly to take over the Visual Arts Program.

Fike described his move as an effort to achieve more creative opportunities in his career. While teaching at Albemarle, he always attempted to use art as the basis of his technical math classes. His cartoon drawing was also an attempt to foster creativity in social studies classes at Albemarle and North Stanly. He added, “the opportunity to teach art at West was a creative challenge, that, in hindsight, I could have only dreamed of.”

The social aspect of an art class is not lost on Fike.

“Art class gets every type of student, from the popular to the social outcasts. They all have the same thing in common. They have a voice that wants to be heard. I feel it is my job to give them that opportunity.”

Fike believes that art finds a way to overcome diversity.

“I have a few groups of students that I know would never have interacted … become friends, if there was no art class.

“One of my favorite students, a very talented senior, told me that she would have dropped out of school had art not been there for her. That was my proudest moment in 28 years of teaching.”

Since arriving at West, Fike has worked to showcase West’s student artists with several shows and exhibits. West artwork has been shown often at the Locust Library in the Town Center in Locust. West Stanly High has also sponsored yearly art shows at the Falling Rivers Gallery and the Stanly Arts Guild & Gallery as well as the Art Council’s Celebration of the Arts Student Art Show. A permanent collection of student work (donated by student artists during their senior year) is displayed in the lobby of West Stanly High, the first piece obtained after Fike’s first year in the position.

In addition, Fike has established a “Gallery Hall” at West Stanly to constantly display current work.

An avid traveler, Fike has accompanied several groups of students to Europe to learn and explore other cultures, the first time in 2000 and most recently with a group from West in 2019.

He also finds time to attend a Cubs game or two during the summer. Fike likes to sketch and draw and enjoys clay and ceramics, establishing a workshop at his home in Albemarle.

For the year 2021, the Arts Person and Fine Arts Educator of the Year awards were combined and honored all arts educators in the county for their dedication to inspiring youth to pursue the arts during the pandemic.

The Stanly County Arts Council was founded in 1974. It continues to promote and support all art forms in the community. Its mission is to encourage and promote broad-based cultural and educational activities in the arts throughout Stanly County.