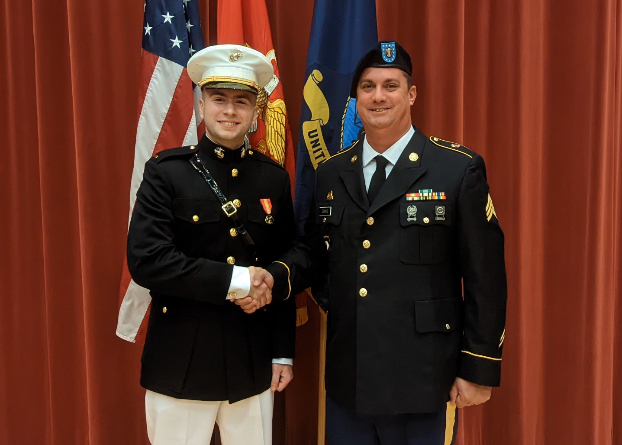 Superintendent Jarrod Dennis is shown with 2nd Lt. Charles Anspach, one of his students when he was principal at Orange Charter School. Photo courtesy of Jarrod Dennis.

Superintendent Dr. Jarrod Dennis was at the University of North Carolina at Chapel Hill’s campus over the weekend to take part in a special ceremony for one of his former students.

Dennis gave the first salute to 2nd Lt. Charles Anspach of the U.S. Marines, during his graduation from UNC Saturday. In exchange, Anspach presented Dennis with a silver dollar as a token of gratitude.

As part of one of the most important military traditions during the Marine officers commissioning ceremony, the new officer receives the first salute traditionally from an enlisted or noncommissioned member of the armed forces who had a great impact on their life, according to the Marines website.

Dennis, who served a stint in the N.C. Army National Guard in Iraq from 2005-2006, had taken part in the ceremony before with one of his friends, but had never participated in one involving a former student. He was Anspach’s principal about a decade ago at Orange Charter School in Hillsborough.

Dennis first found out about Anspach’s request about a month ago, when his mother, who had been a school board member when he was principal, contacted him to see if he would take part.

Having not seen Anspach since his high school graduation around 2013 and not even aware he was pursuing a career in the military, Dennis said he was initially “taken aback” to receive the call, but was honored that Anspach thought so highly of him.

“It meant a great deal to me that this young man included me in this special ceremony,” Dennis said. “It goes to show that you never know as an educator how you can impact a student’s life.”

“I am truly honored he picked me for this special role in his commissioning,” Dennis said. “The United States military has just gained an outstanding leader, and an even better person.”

Dennis contacted SCS Board Chair Glenda Gibson over the weekend after taking part in the ceremony.

“I, along with the rest of our board, am so proud of Dr. Dennis,” she said. “This was such an honor for him.”