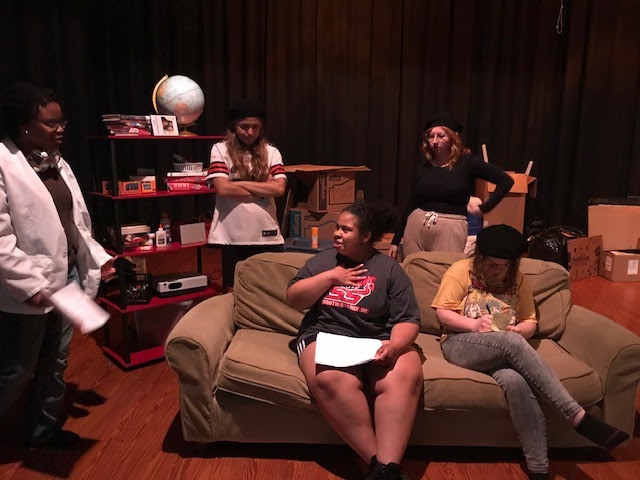 In the spring of 2020, South Stanly High School’s drama club was busy getting ready to put on a production of Justin Flowers’ time-traveling comedy “Throwback Thursday.”

The organization had purchased the script and actors were learning their lines when the COVID-19 pandemic hit and, in the blink of an eye, everything changed.

“March 13 happened (the last in-person day) and then school was over,” said English teacher Dina Story, who oversees the drama club.

Even though the club had to scrap its plans, there was still hope that one day they could perform the production.

Fast forward two years and the club, which is comprised of 12 members, most of them freshmen, is set to perform the long-awaited production this Friday at 6:30 p.m. in the school’s auditorium.

“They’re terribly excited and the thing about it, it’s a whole new group,” Story said, noting only student that was set to be part of the production in 2020 is still part of the club now.

While several other high schools in the county have a rich theater history, most notably The West Stanly Players, South had been lacking a performing arts identity for many years since former theater teacher Charles Carte, who now teaches at Albemarle High, left more than a decade ago. Carte is guest director of the production along with Story.

So Friday’s production represents not just another step to post-pandemic normalcy; for Story and her students, it also symbolizes a revival of the arts.

“We’re trying to bring back the arts to this end of the county,” Story said. “Our ninth graders and tenth graders can’t drive to West Stanly for drama class, but if they can have it here, after school with this club, and still get to do the productions and the things that other kids at other schools have the opportunity to do, that is what they need to have, and I’m willing to help them do that.”

The story, which should last about an hour, focuses on a student named Tony, who — wanting to go back in time to avoid going to summer school (he had just failed algebra) — steals his friend DeeDee’s time machine, despite her warnings. Things don’t go as planned and Tony finds himself with quite a mess.

“Chaos ensues as Tony comes back and forth trying to fix whatever he messed up previously and it kind of spirals really far out of control to the point that there’s zombies and all sort of crazy stuff going on,” Carte said, calling it a really goofy and funny show.

The cast, which has been busy rehearsing for the past two months, includes Keilah Kirby as DeeDee; Grace Kennedy as Mark; Ericah Reese as Kip and Alex; Katherine Poplin as Tony; Alexius Thompson as Sadie; Dayna Miller as Katie; Emma Curlee as Percy; and Breanna Childers as Timmy.

Tickets for the show are not required; the drama club will accept cash or check donations at the door. All proceeds gained from the show will go to build the drama club including purchasing scripts for upcoming plays and improving equipment inside auditorium.

Going forward, the club wants to organize at least two productions each year — a major one in the fall and in the spring — along with bringing back a drama class.

Creating a space for people to express themselves

The school’s drama club was first created in 2019 by senior Taylor Guinn, out of the desire to create a group where all students had the opportunity to express themselves.

“There are so many students that don’t fit in any kind of niche and this is one place that is a really powerful outlet,” Story said.

One of the students Story teaches is part of the drama club. While she is quiet and rarely speaks in class, once she comes to the club, the student really shines and “is a completely different person.”

“It’s a really great outlet for kids to flourish and to grow and to have that space to do the things they would never normally do in their real life.”

Since Guinn, who helped organize the club’s first production of “A Christmas Chaos” in December 2019, was never able to perform “Throwback Thursday” in 2020, Friday’s production is being dedicated to her. Story is excited that she will be in the audience and able to witness the fruits of her labor.

“One of her goals was to leave a legacy of drama behind,” Story said. “She made it happen and my goal is to help see that through and let her legacy live on.”