The Brew Room set to open in Locust Town Center 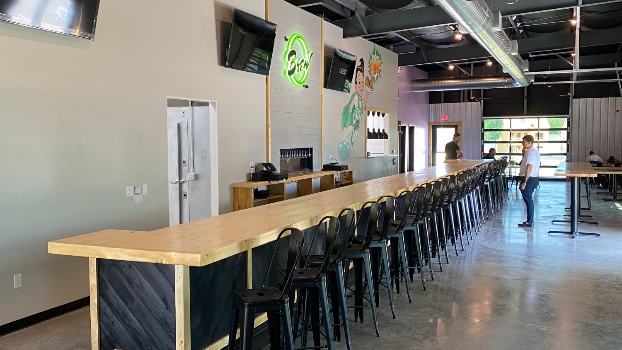 The Brew Room, set to open this month, features 4,600 square feet of indoor space including a long wooden bar.

Following the success of their Locust restaurant The Local Room, which opened in 2020, owners Matthew Harris, Jimmy Molina and Matthew Klepp, along with friend Christopher Kunkel, are excited about launching their next venture.

The Brew Room, the widely-anticipated brewery at 175 Kennedy Dr. across from Locust City Hall, is set to open before the end of the month. The owners invested about $1.2 million into the business.

The idea is for the brewery to be a fun, welcoming and relaxing place where people can come to unwind and socialize with their family and friends.

“Stanly County has been asking for a brewery for a while, so we’re very excited to finally bring that to the community,” Molina said.

“I’m very excited for The Brew Room and their team,” said Locust City Administrator Cesar Correa, who first suggested to Harris the idea of opening a brewery while eating with his family at The Local Room last year. “It has been an incredible experience to witness how much Town Center has changed over the last few years. I believe this establishment, along with the residential development taking place in Town Center, will attract folks from all over the area to enjoy everything Locust has to offer.” 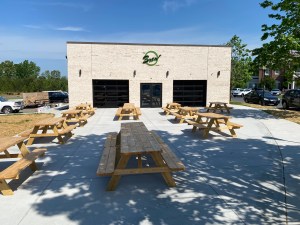 The Brew Room is owned by the same people who operate The Local Room.

The brewery will feature 20 beers on tap, including several in-house rotating selections, along with pale ales, ciders, seltzers, some wine and liquor options and root beer for kids. There will also be a full-service kitchen offering traditional bar snacks and hand-held food for lunch and dinner such as beer battered fish and chips, hot dogs, tacos and tater tots.

The business is still in the process of hiring staff, but Harris anticipates having between 30 to 35 employees.

Much like with The Local Room, the owners wanted the brewery to feature an open space concept where people could spread out and not get too crowded.

The 4,600-square-foot location, which can seat around 100 people, features a variety of spaced-out wooden tables and a bar that extends throughout most of the interior. There are also numerous outdoor dining spaces by the patio. 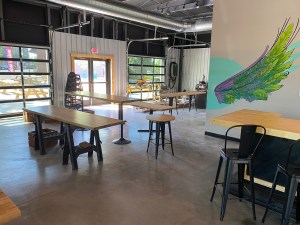 The brewery features several spaced-out tables to give people ample room to relax.

The interest in the new business is clearly palpable: On a daily basis, people in the community regularly visit the space, eagerly counting down the days until it opens.

“We’ll have people walk through the garage doors and they’ll say (pointing to one of the seats at the bar), ‘That one’s my chair,’ ” Harris said.

The business will help meet a need in the community as it will be the first brewery not just in Locust but in Stanly County (another brewery is opening in downtown Albemarle in the coming months). 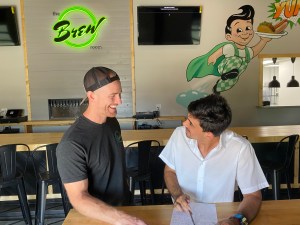 Co-owners Matthew Harris and Jimmy Molina are excited to showcase the brewery to the community.

Kunkel, who is the brew master and will brew everything on site, is excited to introduce the community to new flavors.

“I’ve never brewed on a large scale like this before, but I do have a backlog mainly focused on pale ales, IPAs, stouts, brown ales, porters.”

The Brew Room will also help attract more people to Locust Town Center, which continues to grow and expand, and the increased foot traffic should prove beneficial to neighboring businesses.

“I think this is going to be a big reason why people really come up here to Town Center,” said Klepp, a former Charlotte restaurateur who will operate the kitchen. “It’s nice to be at the beginning of what is eventually going to be a super cool, unique area to come hang out and shop and live in.”

The owners have even had initial discussions about someday franchising the brewery and opening up additional locations in the county along with distributing their in-house beers to local restaurants.

“We’re not going to rule anything out at this point,” Harris said.