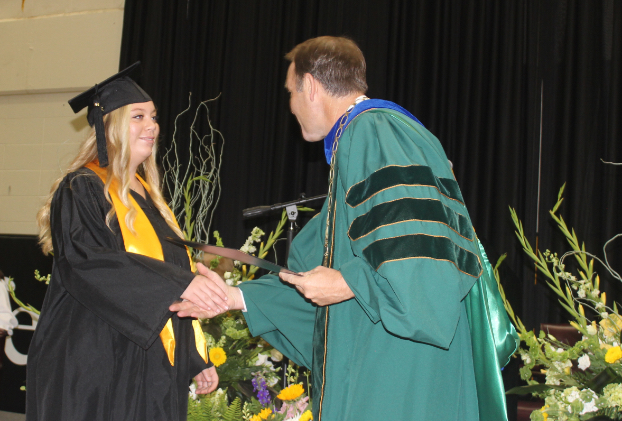 With more than 200 undergraduate and graduate students gathered in anticipation Saturday morning at Pfeiffer University’s Merner Gymnasium, President Scott Bullard reminded them that this moment was not technically referred to as a graduation, which signifies the end of their academic journey; rather it was a commencement, which means a beginning or “a launching pad,” as he told the students.

So while the students have finished their time at Pfeiffer, the rest of their lives are just starting. Some are going to other schools, including Duke University, Wake Forest University and the University of Georgia, to continue their studies, while others will be working at Uwharrie Bank, local schools and health care systems and even a sea turtle hospital in Florida.

In keeping with the theme of service, keynote speaker Roger Dick, president and CEO of Uwharrie Capital Corporation and a member of the university’s board of trustees, challenged the students to become servant leaders, saying they are each part of a “special generation.”

To help illustrate his point, Dick mentioned authors William Strauss and Neil Howe, who came up with a generational theory, describing a recurring generation cycle throughout human history. According to the theory, Dick explained, about every 80 to 100 years there occurred four major generational periods — an initial period of prosperity, followed by periods of awakening, unraveling and crisis — each lasting around 20-25 years, which together make up a saeculum, a length of time roughly equal to the potential lifetime of a person.

“These four periods comprise history’s seasonal rhythm of growth, maturation, entropy and destruction and are called turnings,” he said, noting that people are shaped by the specific periods they were born into.

The current period, known as the millennial saeculum, which began with prosperity following the end of World War II from the mid-1940s until the early 1960s, is in the fourth turning of crisis, which Dick said began around 2008.

While fourth turnings are typically “where old institutions are torn down and rebuilt in response to a threat of what is thought to be about the nation’s very survival” (the three previous fourth turnings were during Great Depression and World War II, the Civil War and the American Revolution), Dick said they can also create “opportunities for fresh growth” — after all, each fourth turning helps shepherd the beginning of the next cycle. 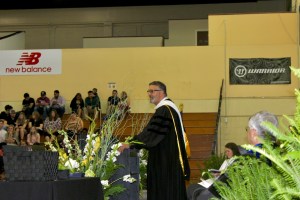 “Class of 2022, you are standing in the lightning, at a moment of creation,” he said, noting people who come of age during a fourth turning — such as millennials —are known as the hero generation. “A new age is about to be born and you will be leading it.”

The essence of their education at Pfeiffer, Dick told the students, lies in the core principle of servant leadership, defined as putting others before themselves and putting beliefs into action. And by putting their degrees to good use, they can help the world.

“You are about to have your rendezvous with your destiny,” Dick said. “Carpe diem, Class of 2022. Seize this opportunity to make a difference …. You were born for this moment.”

With his speech about cultivating new leaders, Dick could have been talking about New London resident Wendy Hopkins, who at age 50 and with three grown children, received her bachelor’s degree in counseling and human services.

With her children having left the house, she needed something to do with her time “and I knew that I wanted to pursue something in regards to helping others,” she said.

With a passion for working with the elderly, particular veterans, Hopkins wants to work as a home health aide at the VA hospital in Salisbury.

“This campus is amazing,” she said about her experience, noting when she first came to the campus and met students and officials, “I got a really good feeling.”

Staff at the college, she said, are about “the success of the students and there’s so much in place to make sure that if you’re just willing to show up and do the work, you’re going to succeed and do very well.”

Dick could also have been talking about 22-year-old Jonathan Glover of Albemarle, who has been working at Food Lion during his college years. With his degree in business management and leadership, he hopes to move up to an analyst position within the company and work in Salisbury.

Looking back on his five years with the university, Glover said the journey has not always been easy, but it has been very rewarding.

“It went by fast, but getting through everything was hard,” he said. “It’s not an easy journey and I’m just grateful for the professors and people that I’ve made those relationships with that will last forever.” 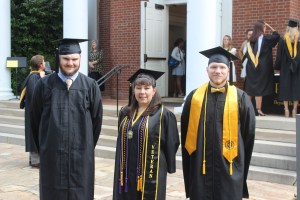 Tanner Haire of Locust, Wendy Hopkins of New London and Jonathan Glover of Albemarle are just a few of the Stanly County residents who graduated from Pfeiffer University Saturday morning.