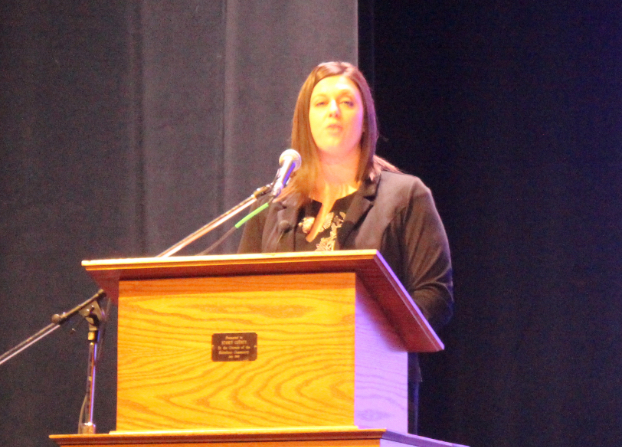 Motivational speaker Jennifer Schuett spends much of her time traveling the country using her voice to advocate for children, especially young survivors of sexual assault. She appreciates the ability to speak because, as a survivor of a violent sexual assault, it’s a miracle she can communicate in the first place.

She shared her story of survival with attendees at the Butterfly House’s Child Abuse Prevention & Awareness Breakfast Friday at the Stanly County Agri-Civic Center.

The Butterfly House provides evaluation and supportive services for victims of child maltreatment, which includes neglect, sexual and physical abuse. The organization served 280 children in Stanly last year, 30 percent more than any previous year, according to director Amy Yow.

In front of a crowd of around 200, Schuett spoke of how in the early morning hours of Aug. 10, 1990, when she was 8, she was abducted from her apartment in Dickinson, Texas by a man she did not know. She tried to scream, but he covered her nose and mouth.

Schuett said he drove her to an overgrown field and sexually assaulted her. She passed out. When she regained consciousness, she was lying naked on top of an ant hill with her throat slashed from ear to ear.

“I prayed because I knew I was going to die,” she said.

After lying in the field for about 12 hours, she was discovered by a group of children playing tag and hide and seek and was quickly rushed to the hospital.

Though unable to speak, Schuett was able to provide written descriptions of her attacker and his car and composite sketches were made of both.

At the time, doctors told her she would never be able to talk again. Despite their prognosis, she regained her voice during her two-week stay in the hospital. Even though her attacker had tried to silence her, she refused to let him.

“I’ve always felt like God gave me my voice back for a reason,” she said.

Schuett’s case went unsolved over the years, with many investigators trying but failing to make any headway. During this time, she never gave up hope.

Using the voice given back to her, Schuett never stopped talking about her abduction and attempted murder. She told her story to anybody who would listen and created her own website.

Eighteen years later, in 2008, her case received renewed interest when it was selected by the FBI’s Child Abduction Rapid Deployment (CARD) team, which was looking for child abduction cases that had gone cold and could be retested for DNA evidence.

The investigators found evidence collected in 1990 which was retested, including the underwear and pajamas Schuett was wearing, as well as a man’s underwear and T-shirt, which were found in the field where Schuett was discovered. The evidence pointed to Dennis Bradford of Arkansas.

Once Bradford was arrested, Rennison and Cromie were able to get him to confess to the abduction, rape and attempted killing of Schuett.

In May 2010, a few months before the trial was to begin, Schuett received what she called the “worst phone call of her life.”

Bradford had killed himself.

“I had worked so hard to remember every detail. I wanted to face him in court and have my opportunity to read my victim impact statement,” she said. “I wanted to see this through to the end.”

A few months later, on Aug. 10, 2010 — exactly 20 years after she was abducted, she visited Bradford’s grave and read her victim impact statement.

“As I was reading it, I looked at my husband and I said, ‘You know, I just can’t help but think if he’s hearing everything that I have to say’ and just then a single fire ant bit me on the leg,” she said, noting she took that as a sign from God that Bradford had definitely heard her.

Schuett ended her story on a positive note. After doctors had told her it would be nearly impossible for her to have children, she was able to overcome those odds and is now the mother of Jenna and Jonah.

“It’s overwhelming for me to see all of you here today because we’ve all come together for a purpose, and that’s the children,” she said. “Just remember that they’re innocent and they’re part of our lives and part of our community and continue to support the wonderful organization, the Butterfly House.”

Through everyone working tougher, she said at the end of her speech, “we can eventually conquer crime, one voice at at time.”